Two experienced church and pub men will be looking for plenty of musical character out of their potential winners on the weekend.

15 bands line up at the Royal Arthur Suite on Saturday morning to tackle the local flavour of Darrol Barry’s ‘Hungerford Town’ suite, which was originally commissioned by the Hungerford Band and their MD, Tim Crouter.

The four movement work is inspired by the market town’s rich history – from the mystery and ruggedness of the ‘Black Prince’, through the ‘Coach Road’ resting place for pre- M1 motorway horses drawn carriages, the serene beauty of the local ‘St Lawrence Church’ and finally the rumbustious old watering hole, ‘The Bear’.

There is plenty of solo and ensemble work dotted around the band – from features for soprano and horn to warm ensemble expression and light witted charm.  It will take a well drilled band to really make the musical pen portraits come to life, if they are to carry off the £2,000 first prize.

Plenty then for the welcome adjudication duo of Mike Kilroy and Graham O’Connor to sort out – two men who have enjoyed the delights of the odd public house and church vestry or two over the years, although neither are quite old enough to have been horse drawn carriage travellers.

11 bands return to battle it out once again, with Thurcroft Welfare gaining promotion up from the Fourth Section.

With last year’s winners Delph now in the Second Section, the two podium finishers from 12 months ago, Hitchin and Amington will be looking claim the title, but they can expect strong challenges from the likes of the in form Eccles under the direction Marieka Gray and the fast emerging City of Bradford under the baton of former Black Dyke percussion star Lee Skipsey. 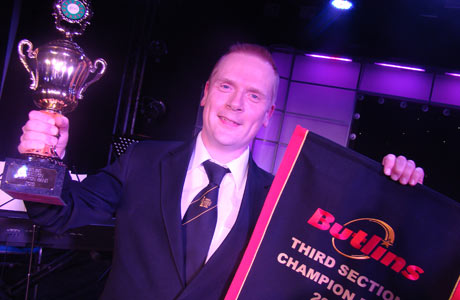 Which band can claim Delph's Butlins title this year?

Elsewhere the solid performers of Pemberton Old JJB (B) and Rivington & Adlington should be confident of battling for a top six finish, whilst Whitworth Vale & Healey under the experienced direction of John Binns, Hucknall conducted by Paul Whyley and Tewkesbury directed by Nigel Morgan will be keen to make an early season mark.

Christine Lippeatt brings her talented youngsters with Thoresby Colliery Youth, whilst Stamford, Hemel Hempstead and Maltby will want to push up the results table here following their lowly finishes last time out.

It’s good to see Brighton & Hove City make the trip up the M25 whilst Thurcroft will be hoping to make an immediate impression on their first appearance in the Third Section after an encouraging 2010.

The rumours coming out of Yorkshire suggest that Lee Skipsey has started to mould an impressive band under his command at City of Bradford and they could well be the pre-contest favourites.

Eccles is another band with a lot going for it at the moment (and Mrs Gray will surely be looking to at least equal her husband in the contest bragging rights), whilst Hitchin and Amington were good value for their podium finishes last year and should do well again.

The battle for the final top six places should be one to enjoy, but we opt for Hucknall & Linby and Pemberton Old, with our dark horse of Whitworth Vale.