A rock and a hard place — Did Steven Mead win his case for Criteria Based Adjudication?

4BR looks back at a sparky but ultimately frustrating debate on Criteria Based Adjudication at the RNCM Festival hosted by Steven Mead. 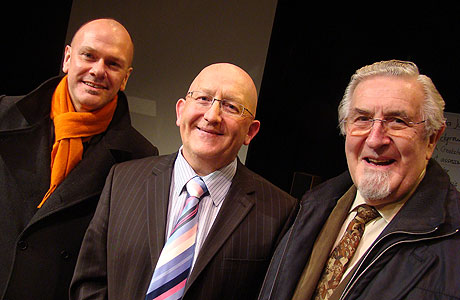 Smiles from both sides: Messers Andrews, Mead and Buckley

Whatever you think of Steven Mead, you cannot question his bravery.

He has been prepared to fight his corner for what he feels is right – even if he has upset a few people in the process.

Around 50 people attended his Criteria Based Adjudication Seminar at the RNCM – from members of the Association of Brass Band adjudicators to leading representatives of banding organisations, conductors and players, past and present – as well as the usual retinue of the press.

Expectations were high, but there was an unmistakable whiff of blood in the air – right from the off.

Despite the usual professional pleasantries being cordially observed, you could sense the defences being constructed with an air of barely concealed resentment.

At its conclusion, Steven Mead looked defiant, a bit bloodied, but certainly unbowed - his opponents the same.

The pair had come out fighting (although thankfully, not literally), and without being quite able to land a knock out blow on the chin of their opponents, they could head home safely claiming a very honourable, if frustrating, draw.

Both sides gave as good as they got. 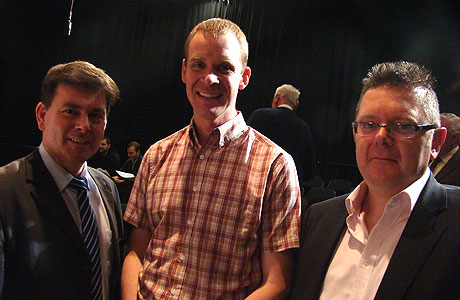 The debate never quite degenerated into a slanging match, but there were occasions when somewhat tetchy opinions brought equally tetchy responses.

There were also one or two occasions when many people didn’t have a clue what some of the protagonists were going on about either.

The real disappointment of the day was that it eventually became a bit of an unfocused free for all – not helped by the concluding debate chaired in a rather eccentrically haphazard manner by Dr Martin Harlow, Dean of Academic Studies at the RNCM.

He seemed rather bewildered by the varying strands of passionate opinion that were being aired at times. If he had been able to attend the seminar from the off it may have helped things immensely.

Such an all-encompassing topic was perhaps never going to result in a clear-cut winner – not when opinions were so ingrained on both sides of the fence.

That said, a series of skilful presentations from Kenneth Crookston, Roger Webster, Howard Evans and Philip Harper trod the fine line between both without ever quite planting a sized 9 boot in either camp.

The British Bandsman Editor looked at the difficulties posed by the need for transparency and understanding, using the examples of the two current systems of brass band rankings.

He also expanded his analysis to include an intriguing set of statistics on just who has won what as a conductor in the last 30 years, and who had judged what in the last 15.

It raised more than a few eyebrows and the occasional hackle. 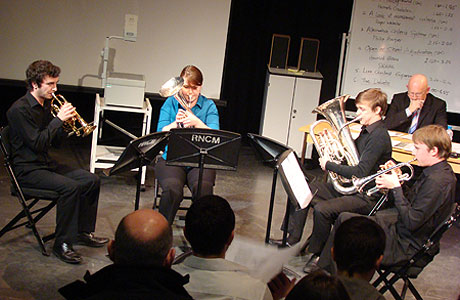 Sitting in judgement - One of the RNCM quartets in action

Dr Roger Webster expanded the question of transparency to include competency in an intelligent and evenhanded critique of just where he stood on the whole debate.

Both sides could take something from what he said to support their cases – but both also found themselves shifting uncomfortably in their seats too.

Philip Harper perhaps got closest to revealing the real fault lines in both sides of the argument – although almost at his own expense.

His own criteria based methodology appeared to be well thought out hybrid of both the current ABBA endorsed system first proposed by Alan Morrison, and that of Steven’s newer version – despite the fact that he revealed that he longer used it.

Closest to knock out blow

Perhaps the most remarkable aspect of his presentation was that it elicited the confession from some quarters (including a member of ABBA itself) that they didn’t even know ABBA’s version existed.

It was the closest anyone came to a knock out blow, although to his credit, Stan Lippeatt put up a sterling rear guard action to get back on the front foot. Brandishing a laminated A4 sheet of the bullet points of the ABBA system, he skilfully highlighted not the differences, but the similarities already in place to what Steven Mead was extolling.

Howard Evans was given the difficult task of putting forward a balanced analysis of the pros and cons of open/closed adjudication – a task he undertook with a clearly defined impartial eloquence.

Questions came and went from the delegates: some helpful, others obtuse, a couple more than a little self-serving.

The frustrations were evident.

After a short break the ‘live’ contest experiment using Criteria Based Adjudication was undertaken with the help of three student quartets, each playing Gilbert Vinter’s ‘Elegy & Rondo’.

As an experiment, time was against it working successfully, despite Steven’s detailed preparation work, and the quartet's approach to the job in hand.

Just getting people to decide which version of Steve’s system they used (or didn’t, as some opponents abstained) meant that any real analysis was difficult, although just like many of the questions asked on the day, some results were helpful, others obtuse and the odd one or two, self serving.

Still, it gave an insight – albeit fleeting, into the objective/subjective nature of adjudication, and for that, it gave plenty of food for thought.

As delegates left to listen to yet more brass music, you sensed we had certainly not heard the last of this contentious topic – not by a long chalk.

Whether Steven Mead will be at it’s forefront we may well have to wait and see.

A draw may have been the best result for all parties concerned.

As always, his personal analysis of the event made for interesting reading on his website – as will the DVD of the event:

”I tried to answer point by point all the concerns expressed by the ABBA, but in my opinion the leading figures from this organisation came to the Seminar with closed minds.

They were not able to engage fully in the issues, and the questions they asked, for the most part, showed a complete reluctance to imagine any change to the current system. This aspect was perhaps the most disappointing.”

Some have asked me what would be the next step. Ideally this should be taken by others...my euphonium is very demanding of me for the next months, and I will concentrate on this. People know my opinions now.”

He has been stubborn, provocative, impassioned and almost evangelical in his crusade. But above all – brave.

He will live to fight another day. His opponents will too.