Forget tradition and heritage — its about providing the best National Championship in the world in Norway. 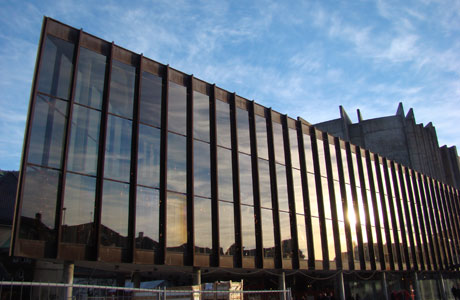 Pointing the way forward - The Grieghallen in Bergen

Once again the Norwegian National Championships provides the blueprint design for others to emulate.

The sense of vibrancy; of a competitive atmosphere that is modern, progressive and relevant seeps through every note that is played, every player that takes to the stage, every conductor who picks up a baton, every helper that assists the bands, every member of the NMF who greets and welcomes you.

It may not be the biggest, the oldest or the most famous National contest in the banding world.

But it is the best.

The Norwegian Championships are now over 30 years old – and those who say they that it has been built on a lack tradition and heritage are talking through their backsides.

Tradition and heritage are irrelevant – they didn’t sell the seats for a packed post results Gala Concert or Elite Section – hard graft and good organisation did.

Neither did hundreds of players stay late into the small hours of Sunday morning celebrating their participation at the event at the fantastic Brass Night – with a great R&B Band providing the entertainment: More hard graft and good organisation did that too.

The same goes to the booking of high class judges, the internet streaming of the First Division and Elite own choices on the Saturday, the professionally presented awards ceremony, the post contest dinner for invited dignitaries and guests, the welcome giving to the banding media.

The construction and composition of the competitive Divisions themselves make realistic sense; as does the emphasis on quality rather than quantity at the highest level, the acceptance of open adjudication, relaxed registration rules to encourage inclusion rather than exclusion.

Overall though, there is the sense that these championships and Norwegian banding have yet to fulfil their potential.

Those who do make the journey across the North Sea to witness just what goes on here leave with same impression: The Norwegians are leaving the rest of us behind – and at a rate of knots. 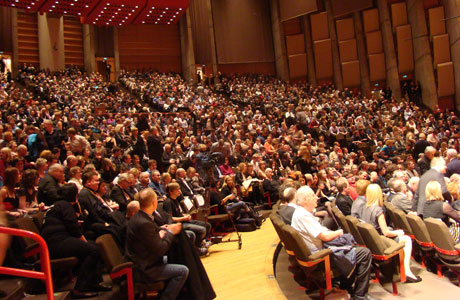 Packed out - a full hall enjoys the bands

The cynics may continue to point out that come the European Championships it has now been over 20 years since the Norwegians claimed the biggest banding prize of all.

But make no mistake about it, their time is fast approaching again, and if they do get their hands on it, it may take a crow bar to peel away their grasp.

The standard of playing by the top three bands in particular in the Elite Division was startling – with the rest not too far behind.

A quick discussion with hardened hacks of the banding press and those visitors from the UK confirmed the impressions made this year.

Eikanger, Manger and Stavanger on this form are top six of better at the British Open – at least two others possible top ten outfits.

There is still a tiny nagging doubt that for all their technical brilliance, their thoroughly modern approach to, and desire to perform contemporary brass works is both a strength and weakness.

However, given the quality of musicianship on show over the weekend, that can now be eradicated, especially with conductors such as David King, Allan Withington, Peter Sebastian Szilvay and Thomas Rimul amongst many others now giving the musical direction. 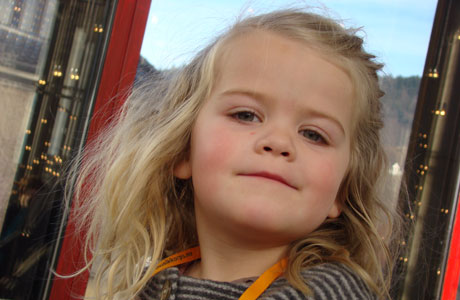 Planning for the future - a new generation is leading the way...

Not afraid to ask

The Norwegians are not afraid to ask for top class brass band help – from playes such as Dewi Griffiths and Paul Hughes who made the trip over from Wales to play their part in Eikanger’s success, to the conductors such as Alan Morrison, Garry Cutt, Gareth Pritchard, Russell Gray, Simon Dobson.

A new generation of players now lead the way in the main bands (perhaps explaining the reason why there is burgeoning ‘old boys’ banding scene developing led of course by Bjorsvik Brass) and new home grown conductor’s too – led by the remarkable Peter Sebastian Szilvay.

The contribution of female players to bands is immense – with some of the real stars of the banding scene here very much from the distaff branch of the banding tree. 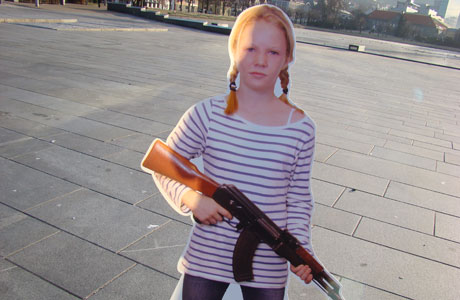 Not all the girls are friendly in Bergen...

The only problem seems to be the lack of female conductors (Marieka Gray was the only female conductor at the championships this year), although that is being addressed by the Norwegian Band Federation, who are trying to encourage more women to pick up the baton.

If they need a lead to follow then they should look no further than the talented Cathrine Winnes Trevino, who has forged an international reputation as an orchestral conductor and has enjoyed conducting and adjudicating at this event in past years.

Meanwhile, the best First Division bands here would be very competitive at top section regional level, whilst the remarkable Bjorsvik Brass would win most top section banding contests anywhere in the world.

In the 30 years it has taken this contest to reach this level of maturity, the Norwegians have embraced, enhanced and improved on the traditional format of contesting that was brought to them with missionary zeal from the UK by the likes of Rod Franks, Ray Farr and Allan Withington.

Now they are showing us the future. It is time to follow them.