The Welsh contesting season starts in Porthcawl on Saturday, when 11 bands line up to battle it out for the 2011 Welsh Open Entertainment Championship title.

The event is run under the auspices of the South Wales Miner’s Federation – or the ‘Fed’ as it is universally known in the South Wales valleys, which for many years supported the burgeoning cultural activities of workers in the mining industry.

And despite the demise of the industry following the devastating Miner’s Strike of the 1980s, they have maintained that support in many guises – none more so than the hosting of the Welsh Miner’s Eisteddfod which started in 1998, and this year celebrates its 14th anniversary.

The venue is the Porthcawl Grand Pavilion an art deco concert hall built in 1932 at a cost of £25,000, and which became world famous in 1957 when the great American singer and actor Paul Robeson was heard to sing over a 5,000 mile trans-Atlantic cable to thank the Welsh mining community for its support of him during the infamous McCarthy ‘Un-American Activities’ hearings.

Pictures of the great man adorn the walls of the Pavilion, and the significance of the venue and its cultural support of miners will be recognised this year by the Welsh language channel S4C filming a documentary during the contest, which will include footage and music from the day.

The Welsh Open is now seen as Welsh banding’s season opener, and a healthy sized audience will fill the 643 seat octagonal auditorium for an event that this year attracts bands from both sides of the River Severn. 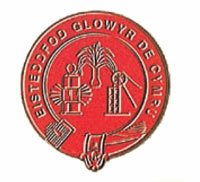 They are all making the trip to the seaside to compete for the first prize of £1,000 and the chance to be able to get their hands on the magnificent CISWO Challenge Cup.

The solid silver trophy is insured for over £20,000 and was rescued from obscurity by the Federation organisers in 1998 and given a superb overhaul – although they subsequently found out that it was originally used as a bowls trophy!

There are additional prizes on offer for the podium finishers as well as an extra £300 for the band providing a separate adjudicator with ‘The Most Entertaining Stage Presentation’ and £300 for the highest placed First Section band not in the main prizes.

With along tradition of self-improvement amongst the Welsh mining community, an important new initiative is being inaugurated this year with the presentation of the Graham Rees Memorial Award.

This will be presented on behalf of Anne Veronica Rees and will see a £500 bursary given to a young player to help with their ongoing musical studies.

The announcement of the first recipient will be made during the day.

Derek Broadbent (right) is a welcome visitor to take on the task of the open adjudication, which will see him deliberate over the bands 20-minute entertainment programmes.

It all kicks off on the stroke of midday, whilst there is a mid afternoon break to allow supporters the chance to nip out and get a bite to eat (there is a great chip shop just around the corner) as well as take a bracing stroll along the Porthcawl promenade.

If it’s a windy – hold onto your umbrella.

4BR will be there to provide live coverage through the 4BR site and 4BR Twitter as well as hopefully speaking to the winners and the adjudicator at the end of the contest.

There are eight domestic challengers, two from the West of England and one band making the trip up from London & the Southern Counties.

Pre contest favourites are sure to be British Open winners Tredegar who have tasted success on no less than eight occasions here, including last year.

The reigning champion (right) will be keen to show that they have carried on that amazing run of 2010 form as they make their first contesting outing of the season under the direction of Ian Porthouse.

They are joined by three time winners and Welsh League champion BTM, who have been improving rapidly under the baton of the talented Tom Davoren.

BTM come to the contest on the back of a fine runner up showing at Yeovil recently, so confidence should be high.

Tongwynlais Temperance on the other hand will want to forget about their Yeovil appearance, which saw the British Open contenders and last Year’s Grand Shield runner up come a disappointing fifth under the baton of Philip Harper.

Renowned for their innovative approach to the entertainment genre, they will be looking to register their first Welsh Open victory after coming 3rd last year.

Meanwhile, Pontardulais Town (Burns Pet Nutrition) will be looking to build on a solid 2010 which ended in them coming runner up to BTM in the top section of the Welsh League.

Paul Jenkins is building a competitive band under his command down at ‘the Bont’, so they should be confident of improving on last year’s 7th place finish.

The same would apply to Burry Port Town, who has been quietly rebuilding under the direction of Michael Thorne.

A band with real talent in the ranks, they came 8th last year and will want to improve on that before they head to the Welsh Area in Swansea in a few weeks time.

Meanwhile, Tylorstown will be champing at the bit after they ended last year crowned as Second Section National Champions of Great Britain as well as Welsh Regional Champion and joint runner up in the top section in the Welsh League.

Directed by one of the Principality’s rising conducting stars in Gary Davies, they return to the contest for the first time in five years.

Another band that has enjoyed recent National success has been City of Cardiff (Melingriffith) who won the Second Section National title in 2009.

Since then Gareth Ritter has developed his band into a competitive outfit becoming Welsh League Champions in the process, and producing a solid performance on their debut here 12 months ago.

Another returnee is Abergavenny who came 9th last year – although this time they will be conducted by the respected percussionist David Griffiths.

The band has produced solid displays at domestic top level contests over recent years, so will be looking start 2011 with a confidence boosting result.

The West of England hopefuls are Lydbrook and Bournemouth Concert – both of whom will also be looking for an early season contest boost before they take part in their Area event in Torquay.

Lydbrook may be something of a dark horse after posting impressive results against strong opposition over the past couple of seasons (notably at the Areas and in coming 5th here last year) and are directed by the experienced Ian Holmes.

That just leaves Staines, who produced a fine account of themselves last year in coming 6th, picking up the prizes for the highest placed First Section and the most entertaining band in the process.

It’s always good to see Melvin White make another visit back to the Principality to renew acquaintances with many old friends from his time directing a number of leading Welsh bands.

If Tredegar has been able to retain the form they showed to such thrilling extent last year, then they should be the band to beat, although they will be wary of the challenge from a fast improving BTM, and a smarting Tongwynlais.

Lydbrook and Bournemouth should be looking to push for a possible podium place if any of the big three drop a clanger or two, whilst Staines should have enough about them to claim another top six finish.

Our dark horse on this occasion is Tylorstown.