A little Welsh inspired lightness of touch may be required if a band is to make it to Cheltenham this year. 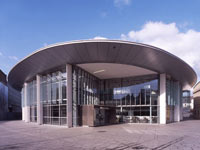 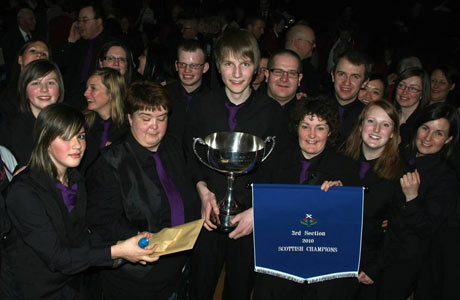 After a few years when the Scots were being competitive come the finals in Harrogate, there was a disappointing showing from the two qualifiers last year when they ended up in 16th & 17th places at the International Conference Centre.

You have to go back to 2000 to find the last time a representative came back home with a National trophy in its possession (Kirkintilloch Kelvin Brass), so perhaps another triumph is overdue.

This year 11 well matched contenders tackle a very tricky set work from the pen of Philip Wilby - with a couple of the movement’s of ‘A Little Light Music’ more than a match for bands in higher sections:

Much then to work on and much for adjudicators Stan Lippeatt and David Read (both right) to ponder over.

The seven bands that tackled an old classic in ‘Labour & Love’ last year return once again, joined by two bands relegated from the Second Section and two promoted from the small Fourth Section.

Of those, three locked horns at the Scottish Challenge Shield in Perth late last year and six competed against each other at the Scottish Borders Contest – so the rivals should know plenty about each other’s strengths and weaknesses.

Of the trio who competed in Perth, it was St David’s Brass who came out on top, ending in 9th place, and if they can up the form they showed there they may well head to the finals for the first time since winning here in 2004.

2010 Fourth Section champion Dumfries put up a solid showing at Perth too and a rapidly improving band should (they ended 11th at Harrogate) be confident of taking yet another step forward under the baton of Peter Heyes.

The two relegated bands will be looking to return to form with Jedforest already showing improvement with a solid podium finish at the Scottish Borders Contest, whilst Dunfermline look to once again produce the competitive edge that saw them gain promotion from this section in 2009.

Alan Fernie has done a wonderful job with the improving Langholm, who will be looking to build on the experience of Harrogate as they make their debuts at this level, whilst Peebles Burgh is another band that is making solid progress since winning the Fourth Section in 2009.

George Annan takes the helm at Perthshire Brass once more as they seek to return to the finals for the first time since 2007, whilst Renfrew Burgh will be keen to up their form to gain a finals spot after missing out in the last two years.

There is sure to be a competitive edge to the trio of Bon Accord Silver B, directed by the talented Richard Kidd, Brass Sounds Inverclyde under the direction of Lynda Nicholson and Buckhaven & Methil Miners directed by David Neil – all three of whom produced solid accounts last year.

As hard as they come this one – with a whole batch of potential winners and qualification combinations.

St David’s and Jedforest look to have that little bit extra about them on this occasion and could well find themselves booking a racecourse outing later in the year, whilst Renfrew, Dumfries, Bon Accord Silver B and Brass Sounds Inverclyde won’t be too far behind. Our dark horse is Peebles

Last competed in 1994 in Fourth Section.