The Scots do everything so well — not that anyone would dare to grumble... 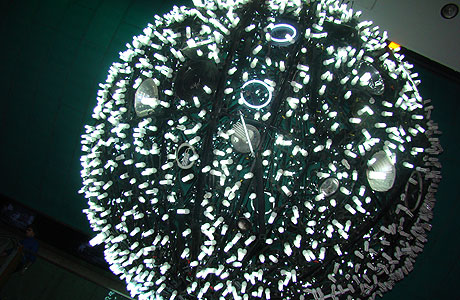 Scotland's version of the Death Star...

The Scots are hell bent on world banding domination:

They even had their own version of the Death Star from the Star Wars films hanging from the ceiling, armed to eradicate any miscreants, critics and malcontents in the bar area at the Scottish Championships at Perth Concert Hall.

Thankfully, the Death Star in question was an ‘installation’ by a Chinese artist called Wang Yu Yang, who also produced the entertaining home video take on the 1969 moon landings that could be viewed in the foyer, and the truly bonkers effort in the gents toilets that saw a young women with electrodes stuck to her head trying to power a battery by ‘the energy of consciousness’.

Having a woman wearing an electric bobble hat staring down on you as you took a pee between bands made for a very conscious effort not to splash your daps.

Perth’s Concert Hall provides a vibrant venue for these championships – although the town itself needs to create a few extra hotel beds in time for the Euro bash in three years time, such is the growing sense of confidence and purpose.

There won’t be any problem with the organisation that’s for certain, as once again the weekend was run very professionally, and bang on time, by SBBA – despite the judges taking an age after some sections to reach their decisions.

That wasn’t a bad thing though, as it meant that potential miscreants had no excuse to grumble in the bar if they were miffed by their result.

The Death Star was pointing at them anyway. 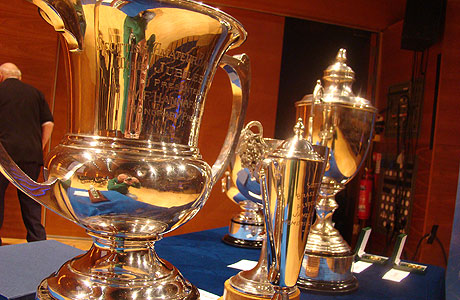 All the silverware on display...

The hall also provided a super acoustic, and despite the judges having to be sat in a Bedouin tent that looked like a second hand bargain from Colonel Gaddafi’s closing down sale, they made sure everyone knew that they had heard every note – good, bad or indifferent.

Each of the sections started and ended on time (despite the delays), whilst the decision to project the full results up on the auditorium screen was a great success, despite the initial problem with the font size that saw band reps peering like John Logie Baird at his first television set.

SBBA’s hard working team of volunteers did a splendid job – from the great girls who ushered the bands on and off (and initiated the welcoming applause as they took to the stage), to chair movers and registration card collectors.

The event programme was excellent (but strangely for the Scots didn’t come with an official price tag), the percussion help provided by the Ev-entz stage crew was top notch, and the presentations were made without too much waffle.

And despite illness sending compere Alasdair Hutton to hospital on Saturday night (thankfully David Read’s imposition was less serious whilst Alasdair was back on his feet within 24 hours) they even had a couple of volunteers on hand to step in and do the announcements. 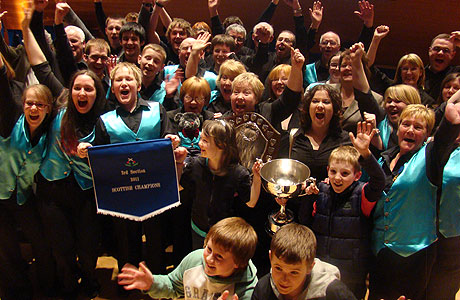 After the hubbub of the results there was the chance to chew the fat in the bar with some pretty happy punters (Lt Col Graham Jones was the only judge we have seen who was offered a pint by at least three bandsmen from different bands!), before the chance to witness a night of celebration in the salubrious surroundings of Whitburn Bowls Club.

Here the newly crowned 2011 Scottish champion presented their SBBA medals (a great tradition in Scotland – all winning players in each section receives one) amid raucous comments, plenty of drink and more than a few tears of joy.

It was a great way to round off a splendid weekend in Scotland.

The Death Star however remains in orbit - a  phantom menace just in case anyone wants a grumble...