Whoever get the nod this year will travel to Cheltenham with a proud record to maintain. 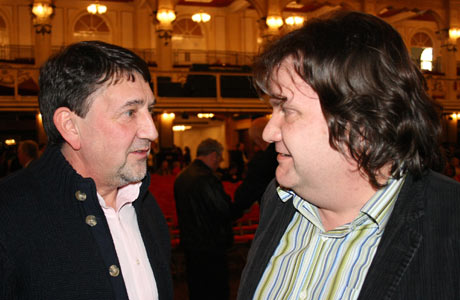 Due to the loss this year of the likes of Cheshire Constabulary, Formby, Skelmersdale, Trinity Girls and Valley Brass Haydock, there are only 13 bands making the starting line, meaning that 2 not 3 will qualify for Cheltenham.

That’s a real pity for the North West, but a relief for the rest of the country as since 2001 the Area has produced 6 Nationals winners (including Delph last year) and no less than 19 top six finishers.

That said, the two that do get the nod from adjudicator Steve Pritchard-Jones (right) will surely travel south with confidence, so the rest of banding better beware the quality if not the quantity.

Philip Wilby’s set work should test the contenders, but the majority of these bands have shown pretty good form of late so the overall standard should be good.

BMP Europe Goodshaw will need to up their form if they are not to be drawn into a relegation dog fight after coming 15th last year, whilst Eagley last qualified for the finals in 2008 and will look to build on a fine runner up spot at Brass at the Guild Hall.

Eccles could well be one of the bands to beat if they can carry on the form they have shown under Marieka Gray’s leadership over the past year.

3rd place at Butlins was a fine result as they seek a second qualification in three years.

Farnworth & Walkden has returned to the Third Section for the first time since 2003, and has shown solid form of late in top six finishes at both Pontins and Brass at the Guild Hall, whilst Karl Stott’s excellent work at Greenall’s is paying dividends with a third successive improved result posted last year.

Band of the Year

Hawk Green (Marple) meanwhile will want to show an upturn in fortune if they are to stop themselves falling through the relegation trap door – although if they repeat the form of their podium finish at Pontins they should be pretty confident of doing that and more, whilst Hazel Grove surely cannot wait for the new season to start.

The 4BR Lower Section Band of the Year had a 2010 to remember, so can they do it all again this time around under Nigel Beasley’s command?

Hoover Bolton enjoyed a fine outing at Harrogate where they came sixth under Trevor Halliwell’s direction and showed good form in the Second Section recently at Brass at the Guild Hall, whilst Lostock Hall Memorial will need to keep an eye out on rivals if they are not to be drawn into a battle for Third Section survival.

If they show the form of Preston things should turn out all right.

Pemberton Old Wigan DW B is on a high after their tremendous Butlins victory at Skegness so confidence won’t be in short supply for Peter Ashley and his band whilst Rivington & Addlington and Malcolm Wilson will be boosted by their fine returns at both Butlins and Preston.

Finally, Stalybridge will be looking forward to hopefully taking another huge leap up the results table after jumping from 15th to 5th last year, whilst Whitworth Vale & Healey should be in good shape after a well deserved top six finish at Butlins.

Another well matched field of contenders, but a couple do catch the eye – with Eccles and Pemberton the two for us if they play to form.

Hoover and Hazel Grove look good bets to feature as do Rivington & Adlington, Whitworth Vale & Healey. Our darkest of dark horses is Eagley