A stern test awaits, but this could be the a contest to savour on the weekend. 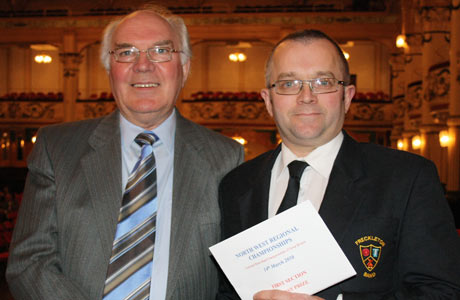 Despite the reservations about the difficulty of the set work, this could be just about the best quality First Section Area contest around this year.

That said, even these 10 well matched bands will find ‘Le Carnival Romain’ one heck of an ask, and David Horsfield (right) could well have plenty to ponder over in the box at the Pavilion Theatre on Sunday morning.

However, a field that includes last year’s Harrogate runner up, the winners of this contest in 2008 and 2009, bands that have shown good form at Pontins, Butlins and Brass at the Guild Hall a few weeks back, should provide a contest to savour.

It’s not often a reigning Area champion comes back to defend its title at this level, but due to their lowly 2009 placing (9th) Freckleton has the opportunity to stamp their authority once again and book their place at Cheltenham in September.

Paul Dalton has a very solid band under his command, and they have certainly shown they have built on that runner up spot at Harrogate with a fine 4th place at Brass at the Guild Hall. They should not be short of confidence.

The 2009 winner Wardle Anderson Brass will be keen to improve on their showing last year when they came a disappointing 8th, and their recent record under Sean Conway’s direction suggests a return towards the top end of the prizes.

Meanwhile, 2008 champion, Roberts Bakery will be looking to help their MD Colin Cranson celebrate his recent 66th birthday with a return to the finals after finding life tough at the top level.

Bollington Brass just missed out on a Harrogate berth last year under the baton of former Fairey baritone star Peter Christian and has been making solid progress under his direction over the past few seasons, whilst the same applies to Manx Concert Brass, who put in another solid showing 12 months ago under Ian Clague.

Two bands who showed good form at Pontins should be confident of making a mark, with the ambitious Oldham (Lees) in particular looking to claim yet another title after finding their feet at this level 12 months ago.

The podium finish in Prestatyn showed their potential, as did the 4th place finish of Rainford, who many thought unlucky not have taken the Pontins title. Both bands recently flexed their early season muscles at Brass at the Guild Hall against top section opposition and were not too far off the pace.

One band that showed they could well be in the mix this weekend if they are able to carry on that Preston form is Longridge, who showed both there and at Butlins that under Mark Peacock’s direction they are a band to watch out for.

Diggle meanwhile will surely enjoy the challenge of a test piece many of their experienced players will know only too well from years past as last year’s Second Section winners make their First Section debuts, whilst Poulton - le- Fylde who last qualified in 2007, will look to make a mark following their relegation from the top section.

A difficult one to sort out if a number play to form, but Freckleton have impressed of late and could well be the band to beat, whilst Longridge and Oldham (Lees) could be right on their shoulders in the battle for a Cheltenham qualification spot.

Roberts Bakery and Wardle Anderson Brass should feature if they return to form, whilst the final top six place is a battle for us between Bollington Brass and Poulton- le -Fylde

North West Bands at the Finals: