14 bands line up on Sunday to see who can master a masterpiece... 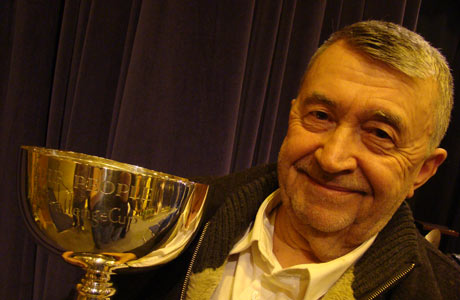 The Second Section should provide a tasty starter to Sunday, as 14 bands battle it out to try and catch the ears of Ian Brownbill and David Lancaster (right) and book their place at Cheltenham.

Whether or not they are able to do that by providing a performance to remember of Eric Ball’s masterpiece, ‘Resurgam’ is another matter – as so far it has shown itself ill suited to the actuality of Second Section banding in Scotland, the North West and Yorkshire.

What looks fairly mild and straight forward on the yellow edged pages of the score has proven to be almost toxic in its ability to burn through the musical hopes of bands up and down the country.

The standard at this level in the West of England has been high for some time, as was shown once more at Harrogate where the two qualifiers did themselves proud in coming runner up and 8th respectively.

The Area has produced two winners since the turn of the Millennium and seven top six results, including two podium finishers in the last two years.

Whoever gets the nod – and however they do it, will travel to the finals with a fair degree of confidence.

There is good news this year in that two bands return to the contest following absences – Bodmin and Soundhouse, with two promoted bands up from the Third Section in Bath Spa and Bugle.

There is no band joining them through relegation from the First though.

From the top then…

Bath Spa gained promotion on the back of what was a solid if unspectacular 7th place in the Third Section.

They last qualified for the finals in 2008 and under the baton of the experienced David Hayward they will be confident of making a return after their win at the Wessex contest.

It’s great to see the return of one of the most famous Cornish banding names, Bodmin Town, who won the Championship Section in 1999.

It’s their first time back since 2008 and they have done so after a successful recruitment drive under the baton of conductor Garry Lannie.

Welshman Rhodri Griffiths leads the assault of 2008 winners Bristol East & Kingswood, as they seek to return to the finals after two years of midfield finishes, whilst John Winterflood brings a highly charged and confident Brunel Brass to the contest.

Success has come quickly for them ever since winning the Fourth Section in 2008 and Third in 2009.

They will be one of the favourites to make it a hat trick of Area titles if they have built on last year’s 5th place.

Another confident band is sure to be Bugle Silver after they won the SWBBA Torquay contest in Torquay.

Despite only coming 8th in the Third Section to gain promotion they are a band on the up.

Cinderford last qualified in 2005, so a return to the finals is overdue for an improving band, whilst City of Bristol has hit a nice vein of form of late under the baton of Ceri Thomas.

6th last year, they came 2nd at the GBBA contest and won the Gloucester event, as well as coming 3rd at the SWBBA contest.

Forest of Dean has been starting to return to better ways since their relegation in 2007 and gained a podium finish to go with their encouraging 4th place last year, whist Pendennis Brass Falmouth won the Fourth Section in 2007 and has been making solid progress since – with a 5th place finish at the SWBBA contest.

Phoenix Brass is due a good result after falling away a little in the past couple of seasons, and with a runner up spot at the SWBBA contest, hopes should be high, whilst its good to see Soundhouse Brass back after a year’s absence.

St Pinnock has just struggled of late and won’t want to be drawn into a relegation battle.

They came 6th at the SWBBA event so there is promise there, whilst Swindon Pegasus Brass was relegated from the First Section in 2009, but showed that they are ready for a speedy return after claming a podium finish last year and a runner up spot at the Wessex contest.

That just leaves Wotton-under-Edge & District who was promoted in 2008 after an eight-year stay in the Third Section.

They will hope to build on a confident performance at the SWBBA event where they came 4th.

Another hard one to call, but given the form guide we are going to opt for a battle between Brunel Brass, who have impressed us each time we have heard them over the past few years, and City of Bristol for the top honours.

Just behind them and waiting for any sort of slip up we think it could well be Forest of Dean, Bodmin, Bugle and Swindon Pegasus for the top six places, with our dark horse of Cinderford.