Plenty of carnivals to enjoy up in this neck of the woods, but which bands will be inspired to get to Cheltenham on Berlioz's version? 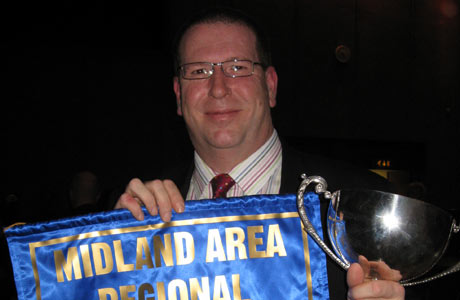 Three areas have tackled ‘Le Carnival Romain’ so far, and three batches of competitors have struggled to overcome its heady mix of technical and lyrical hurdles.

There have been some notable efforts – Hammonds Saltaire at Bradford last weekend, but these have been the exception rather than the rule. In general it has been pretty average fare on a piece that should surely be within the scope of true Championship bands in waiting.

Some of those have come from here in the past: The Midlands has produced three National winners since 2000 and four bands in the top six in the last five years, but that last champion was in 2006, and the 2010 representatives didn’t exactly set the world on fire at Harrogate – coming 5th, 11th and 12th.

Are any of this class of 18 contenders really ready to make that step up in class? ‘Carnival Romain’ will provide some interesting answers.

Peter Bassano and Major Paul Norley (both right) are the men charged with finding the qualifiers for Cheltenham, and they could have their work cut out with what looks on paper at least, to be a well-matched field of rivals.

None really stand out as short odds pre contest favourites.

Seven of these bands locked horns at Butlins earlier in the season and two at Pontins late last year, whilst two promoted and two relegated bands from the Second and Championship Sections join the 14 returnees.

Those Butlins rivals include last year’s winners Langley, who delivered a solid showing in coming 12th at Harrogate, but really built on that with a fine 4th place finish at Skegness.

On that form they will be confident of making the short trip to Cheltenham in September.

Pontins champion Jackfield Elcock Reisen enjoyed a great 2010 and a solid start to 2011 when they came 7th at Butlins.

Simon Platford has a competitive band under this command as they seek to return to championship status with a first finals qualification since 2007.

Oddfellows Brass was last in the Championship Section back in 2000, but after a dip in fortune has been making good progress under Rob Boulter’s command.

Last year’s podium finish led them to Harrogate where they came 11th.

If they have continued to build on that, a return to the finals may beckon again.

Foresters Brass 2000 enjoyed a solid return at Butlins where they came 5th, and after falling away last year to come 8th, Pete Collins will bring a confident band to the contest as they seek a first finals appearance since 2006.

Carlton Brass also enjoyed a top six finish at Skegness as they look to reverse last year’s return that saw them drop from 6th to 15th.

After a busy time in the box, Stan Lippeatt tries to impress his fellow judges from the outside on this occasion.

2009 winners Phoenix West Midlands only had a short stay in the top section and return this year following relegation.

The band has won all four lower sections since 2003 and will look to return to winning ways after their 10th place at Butlins.

Bedworth has fallen away a little in the last couple of years, whilst Enderby has been rebuilding after their relegation from the Championship Section in 2009 – coming 18th at the Senior Trophy and 9th here last time around.

Harborough was the last of the Butlins contenders, but endured a disappointing return in coming 20th.

They look to return to some decent form after struggles of late at this level, whilst the same applies somewhat to Foss Dyke who won here in 2006 but fell away to 14th place last year after two top six finishes.

Both need decent returns this time around to avoid any possible relegation threats.

Meanwhile for Ratby Co-operative, a return to the First Section for the first time in nine years after they couldn’t quite do enough to avoid the drop through the relegation trap door.

14th place at the Senior Cup was a solid enough return, but with the experienced Michael Fowles at the helm a return to better days may be on the cards this weekend.

The two promoted bands of Tintwistle and Wellington (Telford) will be looking to make an immediate mark.

Tintwistle won the Second Section title to make a pretty sharp return following their 2008 relegation, and went on to post a midfield finish at Harrogate. Meanwhile, Wellington showed that they continue to build in confidence and maturity under Mark Phillips as the band that in 2006 was playing in the Fourth Section gained promotion and posted a top 10 finish at Pontins.

Two bands that ended last year’s contest with top six finishes look to push on for possible qualification berths this time around.

Shirland Welfare won the Second Section in 2009 and delivered a winning performance at the recent Derby contest, so confidence should be high, whilst Shirley made a huge leap up the results table lat year when they came 6th and will look to gain their first qualification place since 2003 under David Bishop-Rowe’s experienced baton.

That just leaves Wigston who have fallen away in the past couple of years and will look to gain a qualification place for the first time since 2005 under Gary Sleath.

A difficult one to call as there is no real clear-cut favourite on paper. A handful of bands will fancy their chances though with Jackfield, Ratby and Langley three who should be in the Cheltenham mix.

Oddfellows Brass, Shirland Welfare and Phoenix should be around and about the top six for us with Enderby our dark horse.