Plenty of ambitious bands on show on Saturday, but which of them can rise to the challenge of Eric Ball's masterpiece to get to Cheltenham? 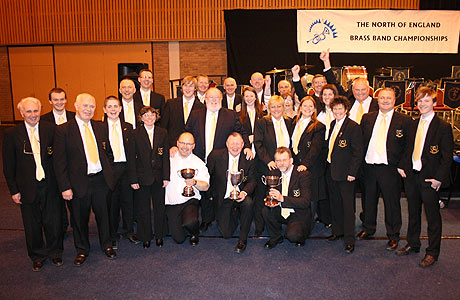 Eric Ball’s ‘Resurgam’ has proved to be one heck of a challenge for competing bands around the country.

Technically it may not look the hardest piece to play, but it appears that players (and especially MDs) have revealed themselves not to be too familiar with the great composer’s musical intentions:

The desolation felt of personal loss and the belief in the hope of resurrection are two very different emotions to those soap opera ones of heart on sleeve despair and sugar coated redemption.

With a bit of luck, and good musical judgement, David Lancaster (right) should get to hear a series of considered approaches to the subtle nuances of the score, and not just a desire to try and create something out of nothing.

As with the other sections, 2010 saw a step backwards for the bands that made it through to Harrogate.

From 2nd & 12th in 2009 to 5th & 15th was a bit of a disappointment, as the North of England has produced strong contenders in the last few years – although you have to go back to 1975 with Northumbria Police for the last National winner.

The eight bands on show this year do have a solid look about them though, with six returnees joined by Durham Miner’s Association relegated form the First Section and Ferryhill Town up from the Third.

Billingham Silver will be looking to build last year’s 7th place following their promotion from the Third Section in 2009, whilst Catterick Brass showed that they should be one of the favourites after qualifying at their first attempt last year and going on to come 11th at Harrogate.

That could have been even better on the day, but complex army logistics meant that a number of the players didn’t get to perform on their own instruments until the morning of the contest!

Brendan Wheeler won’t want that to happen again as he leads the band for the first time.

Reigning champions Cockerton will also be keen to return to the finals after coming 15th at Harrogate. Last year’s victory was their first at this contest in 11 attempts, so now they have got the winning feeling they won’t want to lose it.

Durham Miner’s Association last qualified in 2001, but after a five-year stay in the First Section, fell through the relegation trap door.

They will be keen to bounce back as soon as they can.

Ferryhill Town return to the Second Section for the first time 2008 after showing in the past two years that they have rebuilt with confidence – coming 4th and then claiming a well deserved victory, which saw them head to Harrogate where they ended in 15th.

Houghton meanwhile will be looking to return to the form that saw them come runner up in 2009, whilst Northumbrian Water Ellington Colliery will be hoping to build on a solid showing at Butlins as they seek their first qualification since 2004.

Finally, one of the rising bands of the region in South Milford, who have won the Fourth and Third Section titles in the past three years and just missed out on another finals when they came 3rd last year.

A difficult one to call on such a demanding set work, but if Catterick Brass has been able to put the work in (and these are demanding times for the lads and lasses in the forces) then we think they should just get the nod ahead of South Milford.

However, Cockerton will be snapping at their heels if they make any mistakes, whilst Northumbrian Water, Houghton and Durham Miner’s should make it into the top six. Our dark horse is Ferryhill Town