There should be no excuse about not understanding the musical inspiration behind this one on Saturday... 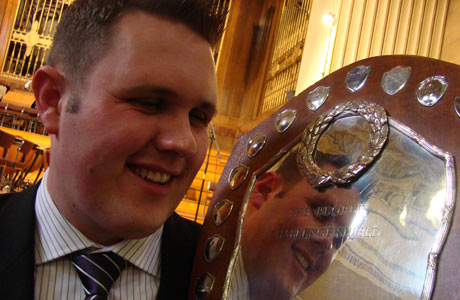 Philip Wilby’s delightful suite should prove to be a popular test piece on Saturday – even if it will surely tax the eight contenders to the full in the process.

As has been the case up and down the country, the wonderful mix of ensemble detail, solo lyricism and down right high paced pyrotechnics has sorted out the best from the rest – although there have been a host of cracking efforts who have tackled the pacy ‘tarantella’ head on, and have not ended up with ice cream all over their fizzogs.

Swansea enjoys a well earned reputation for its Italian ice cream parlours – there are still a couple of crackers to be found not far from the Brangwyn Hall, so it may be well worth a few MDs paying a visit for a quick Neapolitan before they take to the stage.

There is no Ebbw Vale or Royal Oakeley this year, but the eight band field is made up of two returnees in Treherbert & District and Severn Tunnel, as well as two bands promoted up from the Fourth Section and one relegated from the Second.

When it comes to the Finals themselves, the Principality hasn’t done too badly of late, with last year’s qualifiers coming 2nd and 4th – the second year in three that at least one band has made it to the podium, even though you have to go back to 1992 for the last National success.

They dropped through the relegation trap door last year after a couple of disappointing returns, so will be looking to bounce back and return to the finals for the first time since 2002.

Crwbin meanwhile will be looking to build on their National Finals experience.

Despite only coming 21st at Harrogate in the Fourth Section, the whole event proved to be of wonderful benefit for the West Wales band.

Promoted for the first time, they will look to build further on their 5th place finish at the Blaenavon contest.

The youngsters of Goodwick have matured into a wonderfully competitive outfit over the past couple of years under the direction of Matthew Jenkins and were great value for their victory last year.

They showed just how good a band they have become by just missing out on the National title itself at Harrogate, so they will be determined to put that right if they can claim a qualification place in defence of their title.

Newport Borough finally gained promotion last year, despite missing out on the trip to Harrogate.

They will be hoping to build on the solid showing at the Blaenavon contest under the direction of the highly experienced Ivor Barnett.

Ogmore Valley meanwhile will be looking for their first qualification since 2003, and have shown good form of late, posting a top ten finish at Pontins and a podium finish at Blaenavon which helped them come runner up in the overall Welsh League standings.

They enjoyed a good 2010, winning the Fourth Section Welsh League title so should be confident of doing well.

Treherbert last performed here in 2007, and a band that not so long ago was in the top section has worked hard to rebuild.

Reports suggest that could see them put in a highly competitive showing this weekend under the baton of Craig Roberts.

Finally, a band with a steel making heritage – one that goes back as far as the halcyon days of Monty Finniston’s Flying Circus in fact.

Since returning to the contest in 2009 they have made an impression too, gaining a well-deserved promotion last year and picking up a podium finish at the Blaenavon contest.

Goodwick were great value last year and should be in the mix again, whilst the rumours we hear from Treherbert may suggest they return with a bang.

Tata Steel and Ogmore will be snapping at their coat tails, with Newport and Briton ferry making up our top six. Our dark horse is Severn Tunnel.