They do love a good old bit of bible bashing in these parts — especially if its blood and thunder stuff from the pulpit and a chance to rise again... 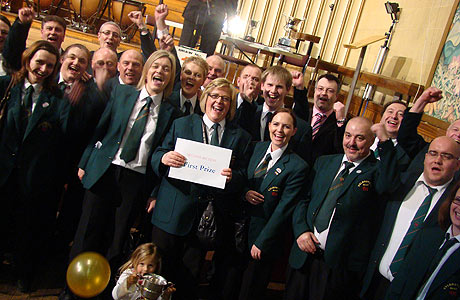 The Welsh love a good bible story – the more dramatic and colourful the better; usually delivered in fire and brimstone fashion by a non-conformist minister from a pulpit on a Sunday morning after an international rugby game…

Well perhaps that would have been true when Eric Ball wrote ‘Resurgam’ back in 1950, because nowadays there are likely to be more empty chapel pews on a Sunday morning service than chairs at Brangwyn Hall on Saturday afternoon for this contest.

The Welsh are more interested in the ghosts of television’s ‘Being Human’ than Eric’s beautifully crafted homage to the possibility of a chance meeting with the resurrected soul of his sister in law.

Still, there is no denying the greatness of the music – and the opportunity it presents these 10 bands to display their lyrical abilities to David Read MBE.

Welsh banding has risen time and again at the Finals of late – with four successive victories to the Principality’s name.

The roll call includes Newbridge (Celynen), Point of Ayr, City of Cardiff (Melingriffith) and Tylorstown, not forgetting that since 2000, Ammanford has also won, whilst four other bands have claimed top six finishes.

Pushing up the daisies

It is a record to be immensely proud of, but given the subject matter of this year’s test piece, it is also pertinent to note that at last three of those past champions are currently pushing up the daisies in temporary repose in the banding cemetery.

Not even Derek Acorah could get Newbridge, Ammanford and Point of Ayr on stage this year.

Plenty to play for

Still plenty to play for the 10 well matched bands, headed in alphabetical order by Blaenavon Town.

They enjoyed a solid 2010 season coming runner up in the First Section of the Welsh League thanks in no small part a podium finish at their local contest late last year.

After two top six finishes in the last two years they will be looking for their first finals appearance since 2008.

Crosskeys meanwhile will also be looking for a finals return after coming 8th last time out.

Keri Bowden has a solid band under this command as they seek to build on the runner up spot claimed at the Blaenavon contest.

The famous old initials of GCG – Gwaun Cae Gurwen, last tasted a regional victory well over 30 years ago, so the champagne has been on ice for some time.

That though could be about to change if they have built on their 5th place finish at Pontins and the success in coming runner up in the Welsh League.

Lewis Merthyr won the top section here in 1984, and whilst they haven’t been able to crack open the bubbly in celebration of a victory since, they have been getting closer – coming 3rd last year under Gareth Pritchard.

They are many people’s pre-contest favourites.

Llanrug is also a band on the up under the baton of Paul Hughes (who was last seen helping Eikanger win the Norwegian Championships in Bergen).

They won this title in 2004, so will be keen to fly the flag at Cheltenham once more.

The promoted Llwydcoed showed their quality in picking up a top six finish at Harrogate after coming runner up here in the Third Section.

They also went on to win the Welsh League title too, so could be a bit of a dark horse on the weekend even in this highly competitive company.

Meanwhile, Newtown Silver make the trip down from mid Wales keen to put behind them last year’s disappointing 10th place finish as they look to return to the finals for the first time since 2005, whilst RAF St Athan is another band who failed to shine as expected when they ended in 12th.

Alan Bourne will be keen to put that right and will look to build on the 6th place they gained in the top section at the Blaenavon contest.

That just leaves the competitive duo of Royal Buckley, who once again show their ambition by engaging a high profile young conductor in Mark Bousie, who has a fine track record with the baton wherever he goes.

He has a hard act to follow though as Paul Lovatt-Cooper led the band to the Third Section title in 2009, although they were a little unlucky under John Doyle to come 7th last time out.

Dean Evans meanwhile has done a great job in revitalising Ynyshir, as they look for their second finals appearance in three years.

Despite coming 11th last year, they posted a fine 4th place at the Blaenavon contest in the First Section.

Now then. A hard one to call, but we opt for a battle between Lewis Merthyr and Llanrug, with Blaenavon and Llwydcoed snapping at their heels. Gwaun Cae Gurwen and Cross Keys should make up the top six, with our dark horse of RAF St Athan.