14 bands will try to make light work of a little light music to get to Cheltenham. 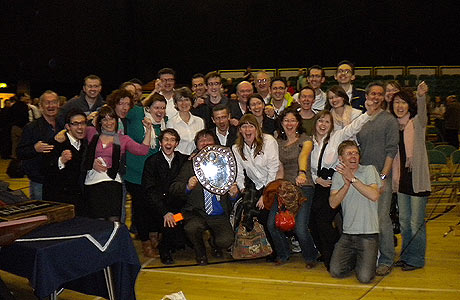 14 bands line up on Sunday morning looking to catch the ear of Major Paul Norley and book their place at Cheltenham racecourse in September.

Philip Wilby’s delightful set work has proven to be a popular test for the bands and great listening for the audiences too, with its mix of stiff technical challenges and lovely musical lyricism – all topped off with that tasty bit of ice cream ‘tarantella’.

It has also sorted the best from the rest too, as it has presented challenges to be overcome for soloists and ensemble alike.

Whoever makes it through then will have to combine solid technicality with musical artistry – and that can only benefit the bands and their MDs.

The area provided two solid qualifiers last year who posted top ten finishes at Harrogate in coming 7th & 8th – the best return since 2005, when Jersey Premier won the National title: Plenty for this year’s contenders to aspire to then.

They are headed by BAE Systems Brass who last qualified in 1999, but who has been improving of late, coming 5th last year and posting a podium finish at the Folkestone event.

Battle Town meanwhile will be looking to make it a hat trick of titles after two successive Fourth Section victories.

They posted a strong performance at Harrogate where they came 7th, so they should be full of confidence.

Brighton & Hove City Brass dropped through the relegation trap door last year after two years in the Second Section, so they will be keen to make an immediate mark, boosted by a solid showing at Butlins where they came 7th.

Chalgrove meanwhile won the Fourth Section here in 2007 and has posted improved results each year since, coming 4th last time out, so their confidence should be pretty high.

Another band who has been a confident contesting outfit of late has been Cold Ash Brass who gained promotion after making their debuts just four years ago.

Crystal Palace will be looking to start the process of returning to the First Section where they played in 2007.

A few disappointing results has seen them drop through the sections, so hopefully a return to better days starts this weekend.

Hangleton is another band that has just dropped off the pace in the last two seasons after coming 2nd in 2008. 9th at Folkestone shows they may have work to do this weekend, whilst Hemel Hempstead will look to build on their top ten finish last year and their 13th place at Butlins earlier this season.

Hitchin was another band that had an early season work out at Skegness where they came 10th although they should be confident after winning at Folkestone and posting a top six finish last time out.

They will want to post a good result this time around to stave off any potential threat of relegation.

Any you can do

Wantage Silver B will be keen to show that anything their senior outfit can do, they can better, as they look to continue the good progress made since their 2000 promotion, whilst Watford is another band steadily climbing up the results table since their promotion in 2008.

Finally, Woodbridge Excelsior held its own last year by coming 12th for a second year in a row, so will want to push on as they seek to secure their Third Section status for another year.

We are going to opt for Hitchin Town if they can show the form that saw them perform well at Butlins and Folkestone, whilst Chalgrove, Battle Town and BAE Systems should push them close.  Wantage and Jubilee are our picks for top six places, whilst our dark horse is Brighton & Hove.

London bands at the Finals: