4BR gives you a daily taste of the 34th European Brass Band Championships in Montreux.

What a great day.

Friday was a musical as well as cultural delight – from the 10 bands playing Oliver Waespi’s brilliant set work, ‘Audivi Media Nocte’ to a boat trip around Lake Geneva as a welcome from the hosts to all the delegates and band reps.


First of all the contest though – and at the end the first leg no-one except the judges could categorically give a definitive answer to who was leading the way.

Those with contesting minds went for the powerhouse performances of Cory and Tredegar with the more compact Treize Etoiles just behind, whilst those of a more bohemian nature opted for the lyrical interpretations delivered by the likes of Manger, Noord Limburgse and Schoonhoven.

It’s been a long time since we’ve been at a contest where even the assembled hacks and lizards of the press corps have nearly come to blows over their choices!

It all sets things up perfectly for Saturday – and what a contest it could turn out to be. It’s the most open European for quite some time.

Earlier in the day, the Swiss made sure everyone knew just how beautiful their country was with a picture postcard opening ceremony that took place at a 16th century castle on the banks of Lake Geneva – although to get there we were all crammed onto a bus like sardines in a tin.

The journey was well worth it though as the venue was like a set from the film ‘Ivanhoe’ – all turrets, fanfares (from the members of the European Youth Brass Band)  and wooden walkways, all topped off with an actor playing William Tell leading the delegates and band reps through proceedings.

As always, it did go on a bit – almost 2 hours in fact before the draw actually took place, but given that it is rumoured that the Swiss had stumped up half a million francs to put the event on, you could see why every sponsor and politician wanted a moment in the spotlight.

The Swiss were not finished with their tourist board advert though – and the trip back to the hall was different and spectacular too– all aboard a paddle steamer, which chugged majestically through the calm waters to dock in plenty of time before the bands took the stage – and right outside the famous Montreux casino.

You could see just where all the money had gone...

Thursday was the first real day of European contesting activity, with the competing bands finally making it from their home countries to Montreux and the first major Euro title decided.

The first faint murmurings were being heard about just how hard Oliver Waespi’s set work, ‘Audivi Media Nocte’ was too - although the bands seemed to think it a cracker that would separate the wheat from the chaff.

We managed to get an extended interview with the composer at the hall and his insight into his composition was fascinating. He is a serious man and a very serious composer – and his test piece is one that will surely be played again and again – although only by the very best of elite bands.

The first European title was decided last night when Erik Van der Kolk from The Netherlands won the 5th European Conductor’s Competition. His concise, compact style brought a fine performance out of Brass Band Fribourg on Holst’s ‘A Moorside Suite’ to pick up a trio of awards that amounted to 4,000 Euro in prize money.

The 25 year old won the audience prize, the band prize and the overall jury prize – not bad work if you can get it, although the actual trophy he received for his efforts still looked like one of those plastic darts efforts you get for winning the mixed doubles down the local Dog & Duck pub.

He is a conductor to keep an eye out for though – he is already directing Brass Band Rijnmond, so is no real novice. He has a very bright banding future ahead of him.

Still, there was plenty to celebrate long into the small hours of the Montreux night, although there wasn’t much left of it after the European Youth Band gave an enjoyable, but very long second half of the concert before the announcement of the results.

We got back to find 4BR down thanks to our American friends investing their web energy into covering the royal wedding. The Yanks will never quite get how important banding really is... 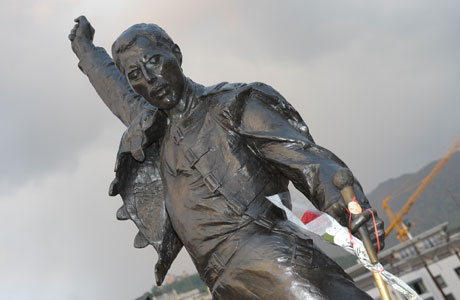 Freddie Mercury looks down on 4BR in Montreux

The final countdown to the 34th European Brass Band Championships has begun.

24 hours before the bands fly into Switzerland and make their way to the Montreux Convention Centre, where they will battle it out for glory on the weekend, the final preparations are being put in place by EBBA.

The European Youth Band met last Saturday and has been kept busy as a real cultural ambassador for the event.

Last night they undertook a four hour bus trip to perform in concert close to the Austrian border to drum up even more support for a festival of brass which has garnered a lot of media coverage out here.

They are led this year by Philippe Bach – son of former EBBA President Markus Bach, and who is regarded as one of Europe’s leading young conductors.

The youngsters have been thrilled by this charismatic young maestro – an MD destined for real international fame and glory.

Markus’s other son, Michael ain’t bad either – and will conduct Brass Band de Cuivres Euphonia in the First Section Contest on Saturday morning – as well as Hepworth at the British Open and Whitburn at the Nationals.

Talking of conductors - the first European title will be decided tonight at the spectacular Stravinski Auditorium, where three very talented young baton wielding maestros compete in the final of the 5th European Conductor’s Competition.

The international field has been whittled down over the week and just the trio of Nick Ost, Tristan Uth and Erik Van der Kolk remain, to be faced with three classics from the banding repertoire – ‘A Moorside Suite,’ A Severn Suite’ and ‘A Downland Suite’.

It promises to be a great opening event.

We will be there on report on just how the title was won and to meet up and talk to the competitors too as we start our comprehensive coverage of the Festival.

In the meantime the sun is shining, the gentle throbbing waves glisten on the slivery waters of Lake Geneva and the Alps shimmer in the background.

The good people of Montreux have even managed to get those preparations right too.