Val Trim reports from the unique atmosphere of the Pershore Music Festival. 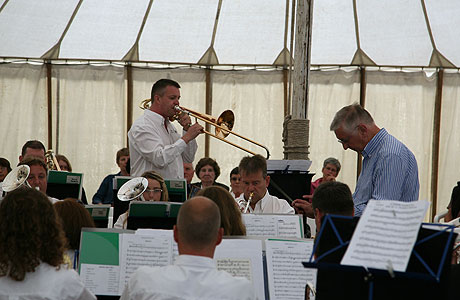 The sun shone throughout much of the day at the recent Pershore Midsummer Brass Festival held in the pretty Worcestershire town, much to the relief of the hard working organising committee.

Four venues, including the magnificent Pershore Abbey, hosted over two dozen bands from across the Midlands who turned out to play for fun and pleasure at this unique, non-competitive event.

Sponsored by the Pershore Town Market Traders Association, the Festival was well attended by a knowledgeable and appreciative audience who, like the players, circulated from one venue to another throughout the day, enjoying plenty of fine music making.

All levels of banding were present, including youth and non-contesting bands, all working hard to make it yet another event to remember.

One of the many highlights was the much anticipated appearance of Bad Neustadt, from Pershore’s twin town in Germany.

The ‘Big Breath Brass Band’  (shortened to B4) has only been in existence since 2007 and has achieved remarkable success in both orchestral as well as fledgling domestic brass band competitions.

With only around 50 English style brass bands existing in Germany, B4 does have difficulties in attracting quality players.

However, their achievement in becoming the reigning 2010 D Section National Champions, (roughly the equivalent of the English Fourth Section) is all the more astonishing.

Under the leadership of Thomas Eckert, this north Bavarian ensemble provided hugely entertaining programmes in both the Abbey and the marquee situated at the rear of the local Angel Inn.

A great deal of care had been taken over the entertaining programme, which included arrangements of Beatle’s songs to the traditional brass band march, ‘Slaidburn’.

As a mark of respect to their English hosts, B4 entertained the crowd with a rousing rendition of Elgar’s ‘Pomp and Circumstance’ that was performed with gusto and commitment, much to the appreciation of the audience. 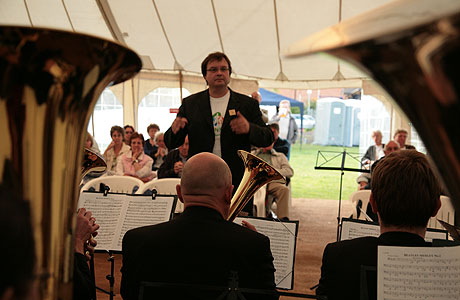 Thomas Eckert conducts B4 from Germany

B4 enjoyed a full day of playing. Earlier, conductor Tom Davoran popped in to try some experimental work in Pershore’s new bandstand where players were offered the chance to get involved in a ‘Big Blow’, playing some of Tom’s new compositions.

The German band responded brilliantly to the invite, so together with their two official appearances and the impromptu concert given on Friday night in the newly erected marquee, it meant that they gave four concerts in less than 24 hours.

The Festival also featured many other excellent performances, with Rushden Windmill proving a popular draw in both the Abbey and the marquee with a carefully constructed programme that showed off their musicality to best advantage under MD John Fletcher.

Opening their sets with ‘Fanfare and Flourishes’ their programmes included ‘Breezing Down Broadway’ and the lovely solo ‘Whistle Down the Wind’ played lyrically by principal cornet, Jane Nicholls.

To end, the band made a game assault on the exciting final movement from ‘Call of the Cossacks’.

The West Mercia Police Band also made an excellent contribution to the day’s proceedings, newly revitalised under the baton of the experienced Alwyn Green.

Smartly turned out, the band performed particularly well in the Abbey providing an entertaining programme that included ‘Zulu’, the ‘Irish Blessing’ and the cornet solo ‘Sugar Blues’ played Jen Harrison.

‘Star Lake’ completed their performance that went down well with the sizeable audience. 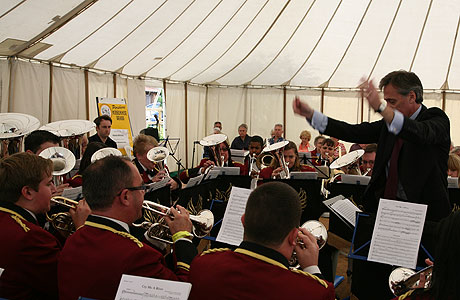 Trevor Jones whip up a Gaelforce with Phoenix West Midlands

Trevor Jones, directed an entertaining Angel Inn session, which included the foot tapping ‘Gaelforce’, while their Abbey programme was unique in being made entirely of Salvationist music.

Particularly moving was the performance of ‘Share My Yoke’, featuring the mellifluous sound of principal cornet Lisa Jenks, while a well-controlled account of Dean Goffin’s meditation on ‘The Light of the World’ was, in the words of a member of the audience, ‘utterly overwhelming’.

Phoenix finished off with, ‘Shine as the Light’. This was received with a standing ovation before they encored with the Salvationist march, ‘The Red Shield’, again to appreciative applause.

Principal cornet Darren Lea’s bravura rendition of ‘Cry Me a River’ took the Abbey by storm whilst the rest of the band’s set was punctuated by interesting and expressive solo and ensemble items.

Eric Ball’s magnificent ‘Kingdom Triumphant’ provided a resounding climax to an enthralling programme, and one that the very large audience, who had packed the Abbey, thrilled to.

Still in the Abbey, Sovereign Band used the majestic setting to attempt something new at Pershore.

The audience in the Abbey had a double dose of this mammoth work as later Staffordshire played an extract from it. 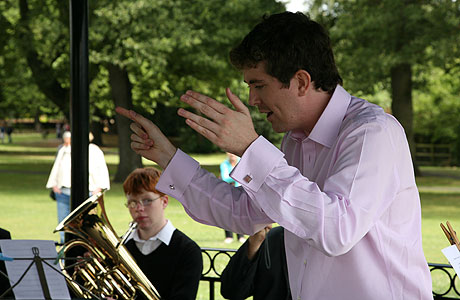 Tom Davoren leads the players in the Big Blow...

Back in the more relaxed atmosphere of the Angel Inn, Sovereign wowed the audience with some fine playing, including the nostalgic, lilting duet ‘She Moves Through the Fair’, admirably performed by soloists Steve Parson (baritone) and Sarah Matthews (flugel).

Many other bands contributed to the special ambiance and atmosphere that Pershore Midsummer Brass generates.

Meanwhile, the popular Baptist Church housed local favourites Shipston, Bretforton, Cleobury Mortimer, Tewskesbury, Avonbank and Arrow Valley  many of who appeared at other venues throughout the day.

Happily, many of the day’s performances have been recorded for posterity by Chorum Records who did a sterling job.

The double CD will be ready shortly and orders are still being taken, either by contacting Steve Swindon of Chorum directly.

Next year’s date has already been set, but because of the Queen’s Jubilee Celebrations and the Olympic Games, the organisers have opted for July 21st.

Keep it a date free in your diaries – it’s a festival not to be missed.