4BR reports from a festival that has grown from humble beginnings to become a mighty treat for brass band enthusiasts. 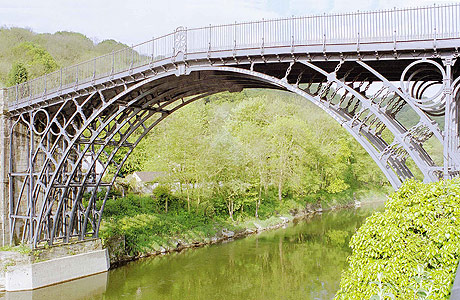 In 2004, the musical acorn that is now the Ironbridge Gorge Brass Band Festival was planted in Telford.

Not renowned for it's banding heritage, few would have thought it would become by its seventh year such a mighty oak in the brass band calendar.

This year’s festival was held over the weekend of 16th & 17th July in the wonderful surroundings of the World Heritage site’s Museum of Iron in Coalbrookdale.

14 bands of all sizes, ages and abilities came to take part in what has to be one of the most professionally organised events in the country.

A small team of volunteers including Sue Palmer (festival secretary), Neil Fury (chairman) & June Softley (treasurer) work wonders to make light work of what can only be described as a logistical nightmare.

All of the bands and volunteers give their time for free, with all proceeds made over the weekend going to the local charities, chiefly Severn Hospice. 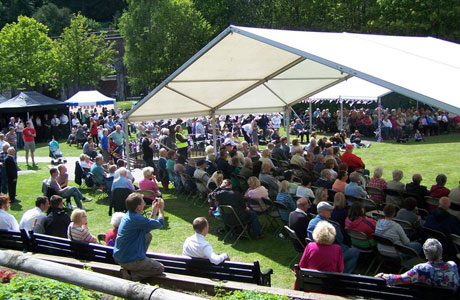 Bringing in the crowds

The festival actually started on the previous Friday with the focus on youth music.

Enginuity, another of the 10 award-winning museums in the Ironbridge Gorge, played host to 20 children led by local brass teacher Andrienna Straw-Windmill.

The students of varying ages and abilities worked together on a range of musical activities as well as performing pieces in small groups and as a whole, culminating in a version of ‘The Raiders March’ by John Williams for hosepipes!

The musical activities were interspersed with activities arranged by the staff at Enginuity, with the day ending with an informal concert for friends and family.

An emphasis on youth banding was evident throughout the weekend with youth bands from Porthywaen and Abraham Darby Academy performing on the main stage.

Abraham Darby Academy Band has traditionally been the first to perform at the festival and have done so since it was founded.

One of the nicest things to see was that all of the bands had a large element of young players. 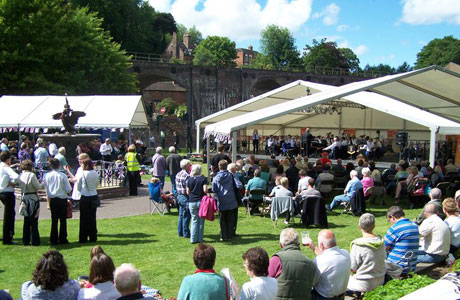 Listen to the bands...

Living up to their billing

Performing to over 500 people in the audience, the British Open contenders really lived up to their billing as the highest-profile band to participate in the seven years the festival has taken place.

With Tongwynlais providing the free entertainment for the afternoon, the site was reset for the centrepiece of the festival, and the 'Last Night of The Proms' concert.

This was the first occasion that this concert was held outside, and all eyes were on the weather that thankfully remained dry for most of the evening.

Wellington (Telford) opened under the direction of Mark Phillips in front of a packed audience.

The band played a varied programme, making use of the spaces around the stage and especially their trombone section. 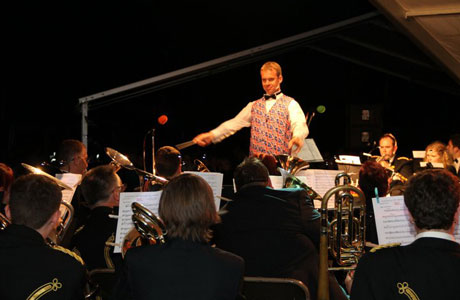 Special mention must go to principal cornet Helen Polatjako, who at just 16 years of age, performed well beyond her years.

Unfortunately the brightness of Philip's attire couldn't stop the rain from falling, although the squall failed to dampen the spirits of the audience.

Their resilience was rewarded by a band on top form performing classics alongside new music from the pen of resident composer Paul McGhee.

Martyn Patterson was imperious on ‘Carmen Fantasy’ on euphonium, whilst to close their solo performance, Tongwynlais opted for a rousing rendition of  'Procession to the Minster'.

After a brief interlude, the real festivities began, with the bands joining forces to play 'Death or Glory','one of at least three performances this piece received over the weekend.

2011 represents the 25th anniversary of The Ironbridge Gorge being made a UNESCO World Heritage Site, and to celebrate, the festival commissioned a new piece from the pen of one of the banding world’s rising compositional stars - Matthew Hall.

Matt conducted the world premiere of 'Spanning Revolutions', a real highlight of the entire weekend, with the music capturing the industrial history and heritage of the Ironbridge Gorge beautifully, complete with the inclusion of an historic anvil played by the compere.

It made for visual as well as aural delight.

Philip Harper returned with mezzo-soprano Helen May as the combined bands led the 'Last Night of the Proms', staple diet of 'Rule Britannia’, ‘Land of Hope and Glory’ and ‘Jerusalem’ with aplomb. 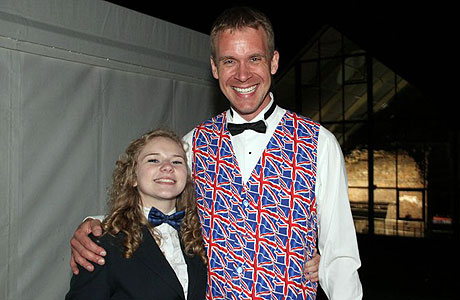 Now that is what I call a waistcoat...

Less than 24 hours later and there was still another full day of free entertainment with seven more bands coming on the Sunday to entertain the crowds.

One special event was Festival Brass, where any band member who had played during the weekend could come and play with everybody else, just for fun.

Almost every band that had performed during the festival had at least one member participating in this special scratch band, conducted by Mark Phillips, playing real classics of the repertoire. 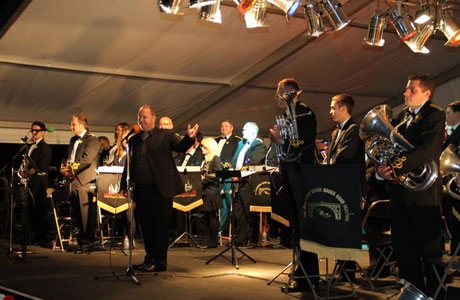 With one spot left to finish the festival, the recently renamed Jaguar Land Rover Band were given the privilege of performing on the main stage in the Grand finale – and did a wonderful job in closing a very special event.

The Ironbridge Gorge Brass Band Festival has become a tremendous event that bands should want to take part in.

With all of the revenue going to such a wonderful cause, a fantastic venue and all of the bands being made so welcome and well looked after, this festival should continue to thrive and grow for many years to come.

It deserves to become a forest of musical oak trees.