Brian Eggleshaw reports from an uplifting community festival based on a foundation of brass in Skegness. 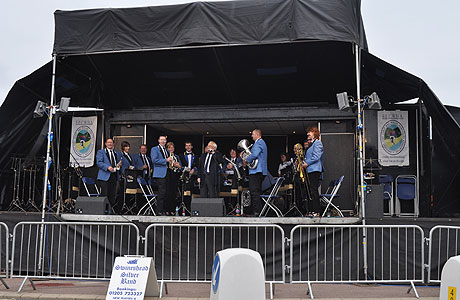 Taking the applause: Swineshead Silver on stage in Skegness

The inaugural Skegness Festival of Bands took place in and around the town’s Tower Gardens and Tower Esplanade seafront last weekend.

The day was planned and organised by Brian Eggleshaw and Steve Walker, with the valuable assistance of Andrew Taylor and Norman and Shirley Prime of Skegness Silver Band.

The aim of the event was not just to help raise the local Lincolnshire profile of many of the bands taking part, but to also increase awareness and funds for the St Baranabas Lincolnshire Hospice.

As a result, a host of supporting organisations took the opportunity to get involved – from the local East Lindsey District Council and the Skegness Town Centre Management to the Skegness East Coast & Wolds Hospitality Association and the local Partnership Group.

All the bands taking part gave their services freely to help provide wonderful entertainment to close on 25,000 people who packed out the venues.

For this first year, the undertaking was incorporated as part of the popular ‘Skegness Switched On’ celebrations, which sees the town increase their electricity consumption tenfold with the switching on of their illuminations.

The flicking of the switch was performed in inimitable fashion by Stavros Flatley and Son, and was further enhanced by a superb firework display, to bring the event to a close.

Throughout the day the musical entertainment took place in various locations around the seafront area, centred on the Tower Gardens and Esplanade venues. 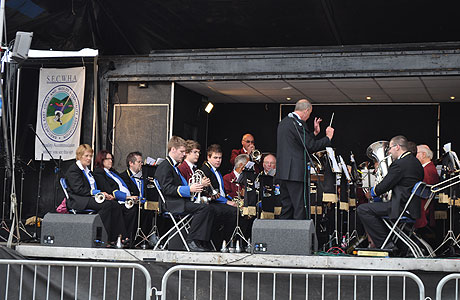 By the time Market Rasen Band performed as part of Skegness’s version of ‘The Last Night of the Proms’, it appeared that every one of those 25,000 visitors was packed into the area to hear them play.

Earlier, Skegness Silver under Steve Walker and Alford Silver under the baton of Richard Walker performed admirably before combining forces to perform items as a joint band on the Esplanade - mirroring the spirit of cooperation and musical harmony that was on display (no pun intended) throughout the day.

It was also highly encouraging to see other local bands play their part in full too, with Silver Sounds Brass from the small village of Dunston, near Lincoln, deliver a highly enjoyable 45 minute programme under the direction of MD, Roy Duncan.

Dunston is a small village with a population of approximately 700, but the band has managed to develop 20 very young and talented musicians, ably directed by Roy and assisted by his wife, Helen.

Meanwhile, Swineshead Silver under MD Baz Starbuck (no relation to the famous coffee shop brand unfortunately he said!) also delivered an enjoyable and varied programme, whilst Skegness and Alford maintained the quality of the easy listening music making (including the obligatory ‘Lincolnshire Poacher’) under Richard Walker’s command.

Market Rasen RPC rounded off the day’s featured playing under the baton of MD Alan Needham.

One of the areas most progressive musical organisations, they provided high class entertainment programming in what was the first of their two featured performances.

They later returned for the evening’s ‘Switched On’ celebrations, where joined by two teams of dancers and a stage disco, they set the union jack flags waving with ‘Prom’ favourites such as ‘The Radetzky March’, Henry Wood’s ‘Fantasia on British Sea Songs’, ‘Jerusalem’, ‘Death or Glory’, and the rousing finale from ‘William Tell’. 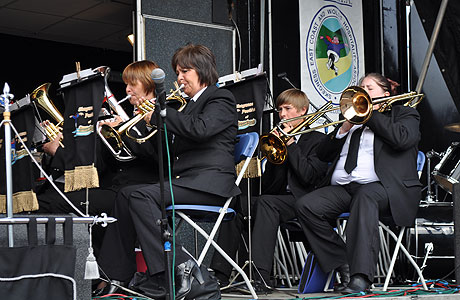 It rounded off a wonderful day of community inspired music making – and all for an equally wonderful cause.

As one visitor later said: “I thought brass bands were a thing of the past. Not now I don’t. It was great to see and hear.”

Collections were taken throughout the day with all monies raised passed to the St Barnabas Lincolnshire Hospice.

A cheque for £2,500 was presented to the Mayor of Skegness, Steve Kirk to pass on to the Hospice administrator.

As I made my way home after an exhausting but truly uplifting day, I reflected on the fact that given all the recent inner city troubles, there is still a huge amount of goodwill and community support that brass bands can tap into to help others in towns such as Skegness.

No trouble and no petty problems – just community based co-operation, support and pride – all backed by the musical foundation of brass band music making.

No wonder so many people took the opportunity to enjoy it.