From Nero to Busby Berkeley — Philip Wilby's 'Red Priest' had it all... 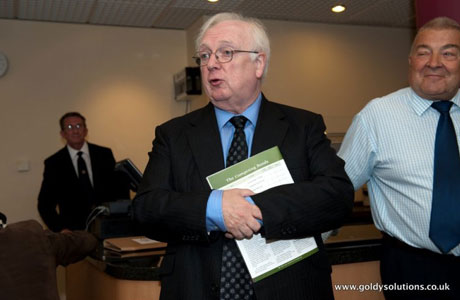 Philip Wilby’s ‘Red Priest’ proved to be an excellent test piece at the British Open.

The Professor has the rare gift of being able to write accessible works that engage not just the performer but the listener too – and as the hall showed throughout the day, that meant that the bands played to more bums on seats than has been the case for a few years at least.

And despite the early reservations about its association with Black Dyke, it soon became apparent that the majority of competitors found it a work they both enjoyed and felt confident of playing well too.

As always with Wilby, he was very clear about his inspiration and what he felt should be both seen and heard. 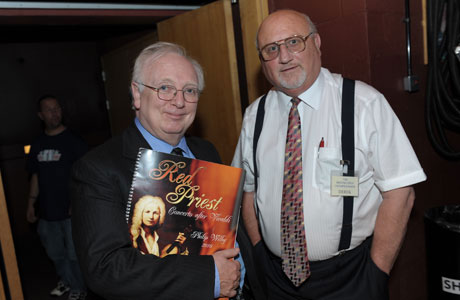 Tucked under the arm. Derek Atkinson, Philip Wilby and the Red Priest...

The extensive use of mutes saw bands empty their coffers to purchase an exotic variety of coloured cups, harmons, plungers and straights – in all shapes and sizes, from wood and plastic to metal and cardboard - and that was just the percussionists....

Meanwhile, the tricky question of where to stand was sensibly left up to the bands by the contest organisers. 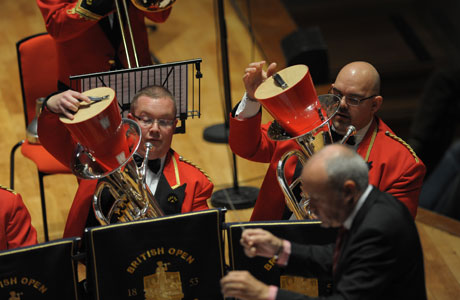 And as expected, the MDs fiddled with things like Nero at a Rome fire damage sale.

There was more choreography going on at times than a Busy Berkeley show.

To be honest it didn’t make that much overall difference to the aural experience, but in a number of cases the balance between solo lines seemed lopsided. 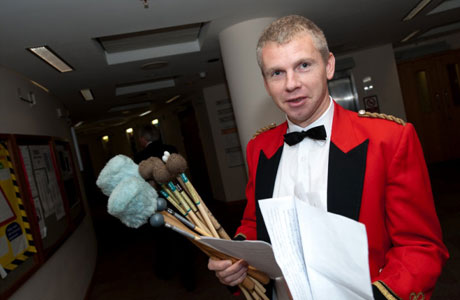 With the majority of bands more than capable of meeting the tricky technical demands of the score (although a number of trombone players found some of the semi quaver work at the edge of their limitations), it was left to the MDs to try and make an extra impression in the box with their musicality.

Some tried from the start with their approaches to the aeroplane ‘take off’ of semi quaver sixes, which although marked at crotchet = 100, saw crafty conductors take more than a few miles off the runway speed.

Cory and Black Dyke in particular rumbled down the tarmac like a 747 rather than a typhoon fighter jet. 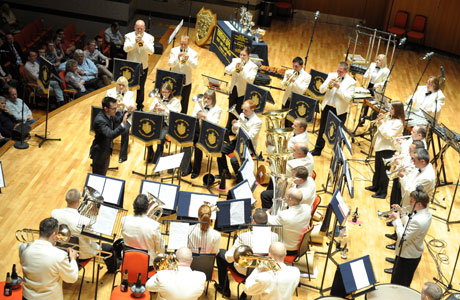 Stand and deliver for Leyland

Those who certainly did their homework found reward – notably the likes of Phillip McCann, who revealed that he had given his players recorded extracts from some of the works Wilby so cleverly quoted from in the test piece.

Those who opted for sheer brute force and will power came a cropper, many missing out on the dry wit that permeated much of the ‘Winter Wonderland’ scenes as adjudicator Michael Ball called them.

There were some odd moments, some nerve shredding ones and some inspired ones too – with David King’s use of what appeared to by some sort of Chinese cymbals in the ‘Four Seasons’ the most inventive by far. 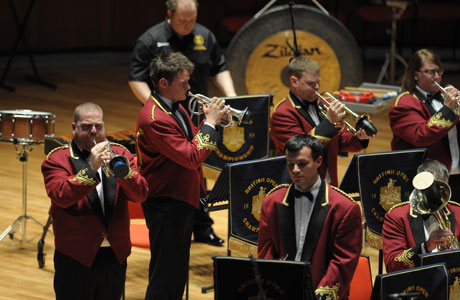 All directions for Tredegar...

The usual camouflage work was of a pretty high order, with a number of sop players lending their principal cornets a helping, although some of the percussion sections and timp players in particular let the adrenaline get the better of them

As for the big ending?

Wilby writes corkers, but many on the day were so elongated that they lost any sense of momentum – some bands almost added an extra bar of tam-tam and side drum crescendo before the very last note.

It was almost, but not quite as self indulgent as some of the ‘milking’ of applause at its conclusion.

It won’t be long before the bandroom tea lady is wheeled on with her urn to accept the plaudits at this rate.

Professor Wilby certainly didn’t choreograph that into his score – not that it would stop some MDs you suspect….