If only the walls could talk? — Backstage at the Albert

Malcolm Wood soaked up the unique atmosphere at the Albert Hall on National Finals day — and was left wondering if there is a place waiting there to record banding history... 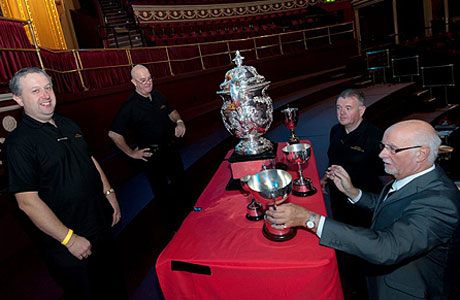 Final touches from Peter Bates and the stage hands

If the walls of the Royal Albert Hall could talk, they could tell some quite remarkable tales.

2011 is the 140th anniversary of one of the world’s iconic concert venues– a unique auditorium that has played host to anyone, who literally has been anyone, from every corner of the musical globe.

Wagner, Verdi and Elgar all conducted the first UK performances of their own works here, whilst its never-ending corridors are liberally sprinkled with framed photos of some of the greatest individual performers ever to set foot on it’s concert platform.

Whether or not a place is being kept for a picture of Professor David King and Brighouse & Rastrick may have to wait until next year, and a possible historic hat-trick win, but you wouldn’t want to bet against the back stage carpenters already lining up the screw holes.

Brass bands have been coming to Kensington for close on 70 years now, but the contribution to the hall’s rich history is surprisingly absent from those famous walls.

Perhaps we haven’t been able to find it. 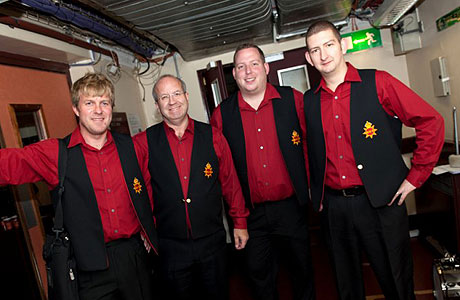 Unlike the rather sterile back stage surroundings found at Symphony Hall in Birmingham, the Albert Hall is a veritable rabbit warren of darkened corridors and subterranean tunnels.

Its Victorian architects designed it for a very singular purpose:

The comfort was for the paying guests, the performers ended up in cramped windowless dressing rooms - the most famous of which – the ones used by Sandie Shaw before she won the Eurovision Song Contest, Eric Clapton and Frank Sinatra, were shoehorned into an area the size of a medieval dungeon just a few feet from the back of the huge stage.

Thankfully, those days are long gone. Since its £20 million pound refit was completed in 2004, the performers are now housed in utilitarian dressing rooms that wouldn’t look out of place in a local council leisure centre.

However, the great sense of atmosphere; the knowledge that you were sitting in the same sweaty seat that over the years may have welcomed the backsides of the rock group Cream, or even the even fatter ones of Sumo wrestlers, has been lost in the process.

All that is now left of that impending nerve-jangling experience is the last few steps that are taken through the narrow off stage passageways onto the stage itself.

The Romans had it right when they called them vomitories - many a player has felt physically sick with nerves as they slowly emerge into the spotlight. 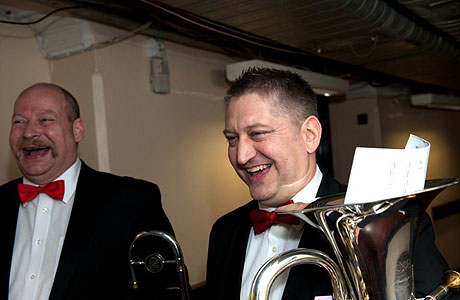 Happy with the days work for EYMS

It made for a mesmerising hive of backstage activity from early on Finals morning though, as sound engineers and lighting hands, band reps and Kapitol Promotion helpers went about their business.

Philip Morris and Nicola Bland cajoled and congratulated, whilst Frank Renton coolly ran through his tribute address to the five greats of banding who’d passed away in the past year.

The percussionist’s had a last minute test of Yamaha equipment, whilst presenter Peter Bates, looking dapper in a well cut suit, checked the draw numbers in his programme and got himself ready for the long day ahead.

The bands themselves had other matters on their minds.

The Welsh duo of Beaumaris and Tredegar arrived for their early draw with mobile phones and ipads on hand as they kept a close eye on the rugby taking place in New Zealand.

Later, their sense of personal triumph and disappointment made for an equally interesting talking point.

Throughout the day the competitors came and went – fresh faced and anxious before a note was blown, drawn and mightily relieved after the last chord was played on a test piece that more than lived up to its billing as being ‘bloody rock hard’ as one cornet player said.

The reviving liquid intake in the nearest bar and at the famous Mews pub ‘The Goat’, must have been of Olympian proportions. 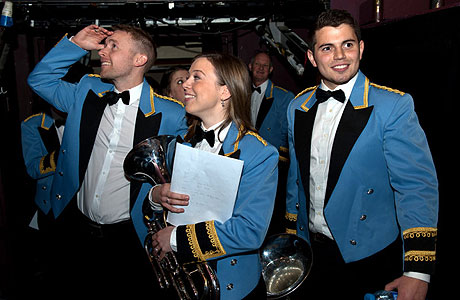 On the look out for Fairey (Geneva)...

The Albert Hall’s massive auditorium means that for the vast majority of the audience (clearly up on numbers this year, much to the obvious delight of the organisers), the intricate nuances of the body language of the performer’s are missed.

However, sat next to the stage you can almost feel the sense of elation or despair as the performances unfold before your eyes. Sometimes, it’s not pretty.

No place to hide

Despite its size, there is no place to hide on the Albert Hall stage – and you quickly get a sense of just what the player’s think of their chances as they troop off.

Those early Welsh contenders, Beaumaris and Tredegar seemed more than happy with their efforts, as did the players of Fairey, as the first half of the contest came to a close.

In contrast, there seemed a resigned air about Cory and Foden’s, sheer delight from Flowers, Hepworth and Carlton Main.

Others just looked pleased it was over - a sense of realism in their chatter as they walked back to the changing rooms. 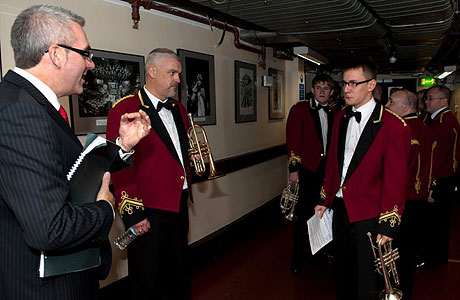 If only the walls could talk...

Fit for a King

Professor David King returned post performance with an unmistakable aura of satisfaction about himself. He thanked his players, and received the congratulations back in return. He had that look of a man who knew he was holding a winning lottery ticket.

Before he could cash it in though, it was left to Cory to deliver the pre-results concert with the look about them that suggested they would have rather been anywhere else than on the most famous brass band stage in the world – although to their credit they performed with admirable professionalism.

Meanwhile Frank Renton played the role of Lord Nelson in the rousing, ‘Battle of Trafalgar’ finale as Frank Renton – a trick first mastered by Michael Caine in just about any film he makes.

It was an equally remarkable bit of theatrical professionalism though, that suggested that he might have been born to the role. 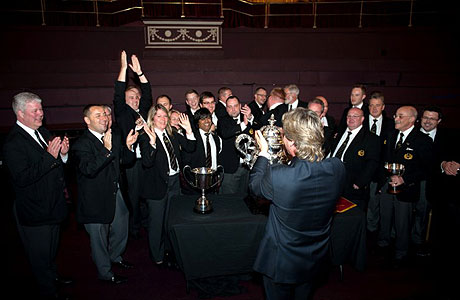 All that was left was the final act of a memorable day – and the crowning of the 2011 champion.

Now the stage became a theatre of celebration.

It was a platform for the jubilant players of Brighouse & Rastrick, their joyous supporters and their deeply satisfied MD to command as well as any of the great performers has done in the past 140 years of this iconic musical venue.

You could see it on their faces and hear it in their voices. The famous corridors of the Albert Hall will resonate with the sound of Yorkshire pride for another 12 months.

All that is now left is to claim their place in Albert Hall history, hung on those famous walls.