Michael Boo previews the US Open Championships this weekend in Illinois. 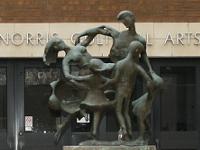 The pre-eminent entertainment brass band contest in North America is always a tremendously enjoyable event, so let’s take a peek at what the bands have in store for us this year.

Their show this year is a diverse collection of Latin-themed music, including Arturo Sandoval’s authentic salsa tune, ‘A Mis Abuelos’.

One thing to look for is the addition of props in the show, which the band public relations person admits, “…will be looked upon as brilliant…or heretical.”

Five of the six selections are custom arrangements written specifically for the band, featuring a large variety of soloists.

All three arrangers—including MD and recording trumpeter Chad Shoopman—also arrange for Disney, giving the band a unique commercial sound that would be at home on the silver screen.

The purchase of several new high-end brass instruments this year has contributed to a tighter, more focused sound.

One thing the band’s members are proud of is their unique style and sound, specifically in their authentic treatment of swing, rock and big band tunes.

There was a conscientious effort in the formative years of the ensemble to not try to sound like the great British bands that the members so admire, due to the realization that they come from a totally different cultural environment.

The success the band has had with this direction has been proof that the decision to be themselves was the right course of action.

Also expected to also be in the hunt for the title in St. Charles is the Fountain City Brass Band of Kansas City, Missouri, winners of the U.S. Open title in 2007, 2008 and 2009 and guests at Brass in Concert last year.

This past summer, the band performed in England, France, Belgium and Holland, taking 4th place at the All-England International Masters Competition, the highest finish for an American band, where arranger, Artistic Director and euphonium player Lee Harrelson became the first American to be awarded Best Soloist at the event.

The band also placed 6th at the 2011 Euro Brass in Drachten, The Netherlands.

There has been a significant change in performing personnel, with five brass players moving on to continue their studies or to accept professional performance gigs and teaching positions elsewhere.

The programme opens with Lee  new arrangement, ‘Piazzolla F.C.’ and a trio of soloists, including baritone, soprano cornet and vibes.

The work is Harrelson’s first arrangement to contain some original material, combined with Piazzolla’s famed ‘Libertango’ and the lesser-known ‘Mumuki’.

Each year, the band conducts its own solo competition to determine who will be the featured soloist at the U.S. Open.

The potential soloists perform their pieces in front of the band, with the members voting on who wins the honor.

This year, Lee Harrelson was selected and will perform a new compilation of works by Philip Wilby, titled, ‘Flight & Zeibekikos’, combining the slow introduction from the central section of ‘Flight’ with the spirited Greek dance, ‘Zeibekikos’ from his ‘Concerto for Euphonium’.

Another new arrangement by Harrelson is of Mark Taylor's ‘Brass Machine’ showcasing the entire cornet section.

Of note is the fact that the band is coming to the U.S. Open with six percussionists who are fully integrated into the show and featured often.

Dublin Silver Band is performing a program titled, ‘A Hero’s Tale’ taking the audience along on the journey of an archetypal hero as described by Joseph Campbell in his 1949 book, ‘The Hero With a Thousand Faces’ .

(The book, comparing stories of heroes in various mythologies, was a major inspiration for the ‘Star Wars’ films of George Lucas.)

The show explores some basic stages heroes pass through, as laid out by Campbell.

These include the call to duty, the initial refusal of the call, crossing the threshold and the road of trials, atonement with the father, the ultimate boon of achieving the goal and the challenges of the return home.

It is a story that is universally known and appreciated.

Josh Jameson, a senior music composition and trombone performance major at Ohio State University, composed ‘A Hero’s Tale’ based on six-note intervals of Jan Van der Roost’s brass band work, ‘Albion’ which itself was inspired by the British Middle Ages.

In this treatment, ‘Albion’ is utilized to represent the ugliness of battle and the horrors of war.

These musical intervals open the show and tie the entire program together, with just over three minutes of the Van der Roost piece incorporated into the show.

A heavy usage of field drums, dissonant chords and odd meters create a sense of discomfort that befits the angst of war.

Various theatrical tools and announcements are employed to convey the emotions of innocence, happiness, denial, inspiration, rage, sorrow and triumph, among others. The audience is expected to feel and experience these emotions.

The distinctive world of brass bands is the theme of the show being presented by the Eastern Iowa Brass Band.

Five genres in which brass bands commonly perform were selected in collaboration with the band’s new conductor, Kate Wohlman, who, for the band’s 25th anniversary this year, wanted to immerse band members in the heart of her native brass band experience…most notably the march and hymn tune contest.

From this starting point, EIBB was drawn to the story of the 1996 movie, ‘Brassed Off.’

Earlier this year, the acting world lost the talented Pete Postlethwaite, who starred in the movie as the band’s terminally ill conductor.

In homage to him, and as celebration of the fifteen years of joy that the movie has brought to bandsmen and non-bandsmen alike, EIBB has chosen five pieces connected with seminal moments from the movie score.

The flugal solo feature is a new work that unexpectedly combines a hidden piece from the soundtrack with progressive rock from the 1970s. And the final selection, used to bring the house down in the movie, is performed in all its extended glory.

Several original members of Eastern Iowa Brass Band are still performing with the ensemble 25 years later, playing alongside university students and local graduates, creating a sense of being tied in with the local community.

This sense is becoming an ever-increasingly important component of the band’s identity; much like the way the featured band in ‘Brassed Off’ came together.

Prairie Brass Band, the host of the U.S. Open Brass Band Championships, is performing a show simply titled, ‘The Sounds of Brass’, offering a wide variety of brass band repertoire, familiar and unexpected.

Each section of the band is featured at some point in the show, in addition to a variety of soloists.

The show is said to open in an unexpected manner and will close with a couple of surprise events.

The featured soloist is a tenor horn player in a new arrangement of music not usually associated with tenor horn.

The band welcomes a number of new members this year and had to turn away potential members due to having a full roster.

Also of interest is the band’s new rehearsal hall in Arlington Heights, a facility it has to itself that is blessed with adequate storage.

The band is also exploring intriguing performance opportunities, including a pops concert this past spring with renowned jazz trumpeter Bobby Lewis and a joint concert with the DeKalb Festival Chorus that featured works about household pets and wild and exotic animals.

As hosts of the U.S. Open, the members of the band take on double duty before and during the event, responsible for the planning and staging of the Brass Band Championships, while having to prepare for performing as well.

After a year away from the U.S. Open, Motor City Brass Band is welcomed back with their show, ‘The Spirit of America’ - a tribute to the struggles and victories in time of great challenge.

Each selection is preceded by readings of famous quotes of historic figures who represented the spirit and determination of the moments depicted in the music.

This repertoire is in contrast to the light-hearted pop and jazz selections that the band had been known for, commencing with the bravura of William Schuman’s ‘Chester’ arranged by music director Craig Strain, encapsulating the lofty goals of the American Revolution.

This past year has seen a number of younger, talented players come into the band.

Among the 20 performances was a concert series that drew well over 500 audience members.

Over 1,000 fans filled the concert hall for the band’s 2nd annual Motor City Festival of Brass, which concluded with a combined band of 300 musicians.

The 2012 Festival will be held this coming March 11 and will feature composer William Himes as guest conductor.

The U.S. Open allows the band to live up to its motto, “It’s more than a concert; it’s a show!”