4BR Editor Iwan Fox talks to a man who certainly knows how to put the importance of brass banding into perspective. 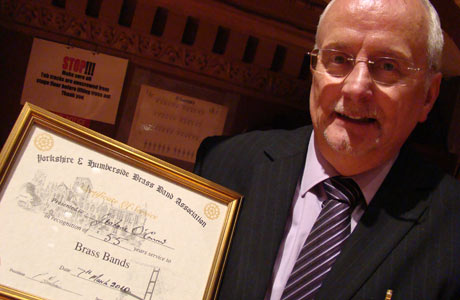 A lifetime in banding: Graham O'Connor

It’s always good to talk to people who know how to put brass banding into a proper perspective.

Midway through 2010, Graham O’Connor, was growing increasingly frustrated that he was struggling to conduct the Hatfield Band to the standard that over the past 27 years had seen them grow into a competitive force in the heartland of Yorkshire banding.

He was getting tired very quickly, lacking energy and coughing like an old collier with a 40 a day Woodbine habit.

At first he found himself getting tired at the end of rehearsals, then came problems getting up a flight of stairs at home.

He decided he needed a break to recharge the batteries and reluctantly handed over the baton for the Area contest at Bradford and the Senior Cup at Blackpool.

The results hadn’t gone as well as he had hoped, but that didn’t really matter anymore.

Now he was sat in the office of a consultant surgeon in Newcastle who had just informed him that he needed a double lung transplant – and fast.

40 years of top class banding was put firmly in perspective:

Four decades that included wins as a player at the British Open with Grimethorpe, three Grand Shield titles with different bands as a conductor, victories at the helm at the Senior Cup, Butlins, Pontins, National Finals and CISWO. Then there were Area triumphs and qualifications from just about every region of the country.

Now, he was being told the future was one that didn’t include brass banding – in any shape or form.

“I went in worrying about how I would have to pick up the band’s confidence,” he told me.

“And now I was being told that if I didn’t get on the transplant list immediately, I wouldn’t be in a fit state in a couple of months time to even pick up a baton.”

It was devastating news; but also the start of a remarkable road to recovery. 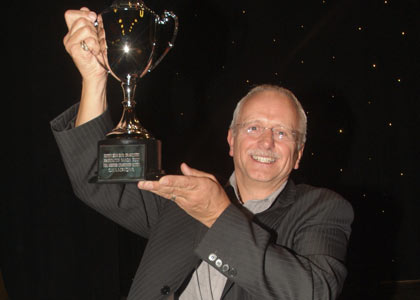 Another victory: Lifting the Pontins trophy in 2007

Graham was diagnosed with Cryptogenic Fibrosis Alveolitis; a chronic, progressive lung disease, that even now has yet to be fully understood.

For a man who didn’t smoke, wasn’t a big drinker and only occasionally endured the dusty atmosphere of the coal face during his time at Grimethorpe Colliery, it finally explained why one lung was completely shot to pieces, the other was working at around 25% of capacity, and he had to use bottled oxygen to get through the day.

“It was an odd feeling,” he admitted. “Strange as it may seem, it was a relief that I finally knew what the problem was, and even though the outlook was pretty bleak, it gave me a huge sense of determination to beat it.”

Graham was put on the long waiting list, but amazingly, within a week of being on the ‘active’ transplant list in late September, he received a telephone call.

“I was at home when all of a sudden the phone went, and I was being told to get things packed and make my way up to the Freeman’s Hospital in Newcastle. I rang my wife and within 24 hours I was being prepared for surgery.”

Graham’s well known sense of humour describes what happened next.

“I had to completely shave my chest for the operation. I looked like a Christmas turkey!

The surgeons told me exactly what would be happening too – with two incisions in much the same place as women have their boob jobs.

Thankfully I didn’t need any extra padding in that department!”

After seven and half hours on the operating table, Graham was put into intensive care.

However, that gritty Yorkshire spirit meant that within 48 hours he was off the lung machine helping him to breath, sitting up in a chair and starting to take his first few steps on the road to recovery – minus that cough and feeling full of energy once again.

“It was amazing. The physiotherapist told me that after I had my first tests on the treadmill and my gym work, I was at 97% capacity – and that I had the lungs of a 19 year old.”

That latter, hypothetical comment was the one that certainly put his new start in life completely into crystal clear perspective.

“Although I wasn’t told the name or age of my donor, I was told they were very much younger than me. I was allowed to write a letter of thanks to the family for the remarkable gift they had given to me.

I will never be able to repay them, but I can assure you I will try – especially as it now means I can get back to doing the thing I love – conducting brass bands.  Winning and losing is no longer important, but doing something with my new life in music is.” 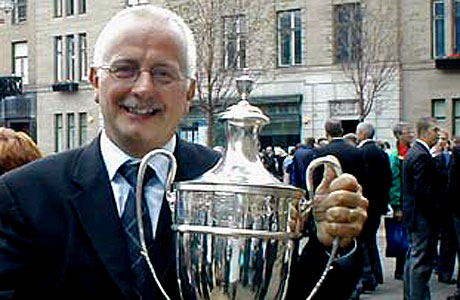 National Champions in Dundee in 2003

Understandably, Graham is determined to get back into the swing of things as soon as possible, although he will be enjoying Christmas first.

“I can’t wait for the start of the new season,” he said excitedly. “I’ve got a strict fitness regime in place and I’m walking four miles day.

I feel so full of energy that my wife has to lock the doors to stop me from going out and even the dog is hiding the lead!”

His first port of call will be back helping rebuild Hatfield. After 27 years at the helm it almost seems like a new start too.

“We have such a young band. It’s now got an average age of around 18, but there is so much talent around the stands that I’m certain we are going to grow into a competitive top section force once again.”

He is also looking forward to trips to some of his favourites old contesting hunting grounds too.

“The challenge of getting back into the Grand Shield at Blackpool is going to be tough, but it’s a contest I seem to have been good at,” he laughs.

“I’m judging at Butlins in January and then it’s all go for Bradford. I just can’t wait to walk onto the stage at St George’s Hall once again – it will be like going back to the first contests I played there with Grimethorpe.”

However, the gift of a new life has given this most determined of men the opportunity to help other sufferers of an illness that almost ended his involvement in banding completely.

“I have to take medication and go for regular tests, and I’m taking part in a long term study of the condition at Nottingham University.

At the moment there’s research into the possible causes – including the effects of playing brass instruments.

It’s believed that there may be bacteria transferred from instrument to instrument from people who host the condition – the result of which may lead to someone like myself being attacked so aggressively.” 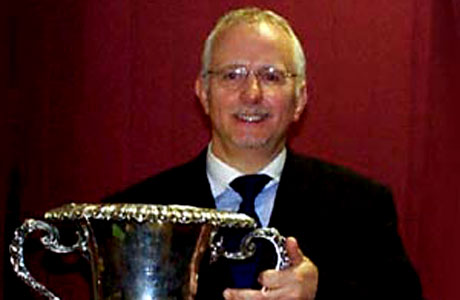 His thoughts however return to those who have supported him during an exceptionally difficult period in his life.

“My wife has been amazing, and also the medical experts, doctors and nurses. Words cannot describe the gratitude I have for the donor.”

The banding world too has played an important role in his recovery.

“As soon as the news was posted on 4BR I was inundated with get well cards, messages and letters from all over the banding world.

Former colleagues, players from bands I conducted, old friends I lost touch with – it’s been amazing. I didn’t know so many people liked me!”

For a man who has given so much to the banding movement that shouldn’t have come as a surprise: But then again, Graham O’Connor is a man who has had to endure a less welcome surprise in his life too – and come through it.

Now a bright and healthy future beckons, and it is one that he is determined to enjoy more than ever.