Which recordings made you want to replace Adele on your ipod with a brass band recording during 2011?

Very much like last season, 2011 was not a vintage year of brass band recordings – with many releases lacking inspiration and originality.

There were plenty of worthy productions, but at £15.00 a shot or more, you do get the feeling that CD and DVD prices for brass band recordings are now getting very high for what in many cases is by no means a premium product.

One DVD nomination once again showed the limitations of brass bands as a means of visual entertainment unless backed by other strands of general interest.

Still, there were a few real gems - and these were our pick to consider.

'Under the Spell of Spain' is the first recording of the 'Superbrass' group, gathered together by trombonist Roger Argente.This was premium playing by premium players.

PLC does it again.

The second raft of completely infectious compositions that plug into the zeitgeist of the modern brass banding generation. 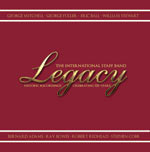 A fitting reminder of the huge contribution made by the ISB to brass band music making in the last 120 years.

Recorded in aid of the Clarence Adoo Trust, Reg Vardy play their part in an affectionate tribute to the music of Dean Goffin with a varied and fascinating programme.

It provides the clear evidence of Goffin’s creative and technical mastery.

The fourth in the series sees Foden’s in relaxed but impressive form under the baton of Michael Fowles.

Slick, polished and as good an example of how to produce an east listening, sell by numbers CD recording.

All the highlights of the 2011 Championship – from the great performances of some great and varied music, to the people who made it tick. All backed up with plenty of stunning backdrops.

All that was missing was the whiff of money...