Another cracking contest in store in the Second Division with 13 well matched bands all hoping to gain another step up the Norwegian promotion ladder.

With three quality bands gaining promotion last year, this weekend’s Second Division contest could be a much more closely fought battle for the title.

As always there are a host of ambitious well matched bands taking to the stage on Friday morning.

Eight locked horns at the SIDDIS Contest in Stavanger with a further two competing in the First Section there.

There are some ambitious own choice selections of music being performed too: from Gregson and Ball to van der Roost and Steadman Allen. Plenty then for the experienced adjudication team of Kim Lofthouse and Tijmen Botma to enjoy. 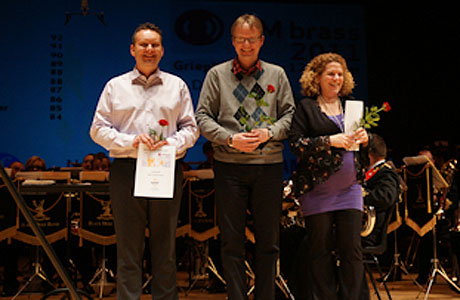 The three bands that dropped through the First Division relegation trap door will be looking for an immediate return.

Tertnes Amatorkorps kick off the contest under the experienced Yngve Nikolaisen looking to build on their second place at the SIDDIS event, with their own choice selection of the seminal Edward Gregson test piece, ‘Essay’.

Meanwhile,  Alexander Brass also opts for a Gregson classic, with ‘Connotations’ as they seek a third Second Division title under the direction of Jacob Vilheim Larsen.

The third of trio Tomra will once again be conducted by euphonium star Mick Ost – and they will be keen to banish the memories of their disastrous 10th place finish last year.

A fine runner up finish at SIDDIS perhaps shows that they are the band to beat, especially if they can deliver a quality performance of ‘Cambridge Variations’.

For the three promoted bands, it will be question of whether or they can make an immediate mark against a higher class of rival.

Rong Brass should be confident of doing just that as the 2011 Third Division champion is led once more by the giant Eirik Gjerdevik to perform James Curnow’s ‘Trittico’.

It’s an ambitious choice, but a solid showing at SIDDIS indicated they could be a band to watch out for.

So too Hasle Brass, who claimed a podium finish in Stavanger and pushed Rong all the way last year under the baton of Robert Solberg Nilsen.

They have opted for the fun and games of Martin Ellerby’s descriptive Errol Flynn inspired ‘Chivalry’.

Grenland Brass will be looking to build on the solid progress they have made in the last few years.

They were performing in the Fourth Division in 2011, so they are certainly moving in the right direction. They will test themselves on Philip Harper’s Welsh inspired ‘Kingdom of Dragons’. 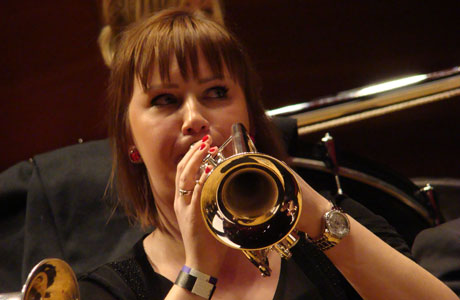 Keeping the eyes on the job....

Tromso is another band that brings good recent form with them following their victory at SIDDIS.

They claimed this title back in 1998, so another victory is long overdue. Tor Kristian Innbjor will lead the band on James Curnow’s ‘Trittico’.

Surprisingly, Manger Old Stars has yet to win a National title (unlike their more serious namesakes) so perhaps this will be the year they put their name on some silverware under the direction of Johannes Mangersnes.

They have opted for Ray Steadman-Allen’s ‘The Lord is King’.

Borge Brass will be looking to build on their good National form after coming 4th last year.

They have also decided to go with a Salvation Army classic in the form of Eric Ball’s iconic ‘Resurgam’ under the direction of Oddvar Nostdal.

Haukas Musikklag meanwhile will be hoping for an upturn in their contest fortunes after a disappointing 2011 season.

Double champions in 1993 and 2005 they have chosen Jan van der Roost’s ‘Excalibur’ to slay a few rivals at the very least.

Lindas Brass came 5th last year and will take to the stage under the direction of Helge Haukas.

They are hoping to claim a podium finish with the help of Eric Ball’s much loved ‘Tournament for Brass’, whilst Askoy have opted for the former European set work, ‘Tallis Variations’ as they look to build on the confidence gained by coming runner up in the First Division at SIDDIS.

That just leaves Sagvag Musikklag to round off the contest, as the 1995 First Division champion looks to make a mark on the top six here for the first time since 2002.

They have chosen Stephen Bulla’s ‘Firestorm’.

A really difficult one to call, but we have opted for Askoy Brass if they have been able to build on that fine SIDDIS outing, closely followed by Borge Brass and Alexander Brass for the podium places.

Behind them it could be anyone’s game, but we have opted to give the kiss of death to Tomra, Tertnes and Tromso with Manger as our dark horse.

Own Choice Selection: The Kingdom of Dragons (Philip Harper)

Own Choice Selection: The Lord is King (Ray Steadman-Allen)