At least two bands won't have a cross to bear on Sunday night... 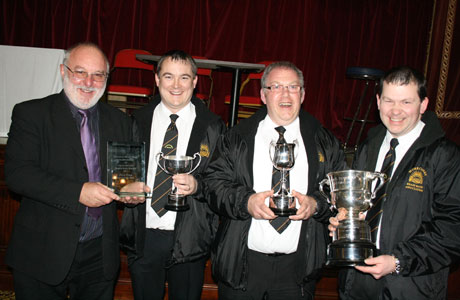 Who will follow Morecambe in winning the Second Section this year?

Second Section bands can be forgiven for thinking they have drawn the short straw when it comes to the Area test pieces on offer this year.

The First Section gets a pleasant stroll through the lowlands of the Swiss Alps, whilst they get the toughest of tests on ‘Cross Patonce’ by Goff Richards.

Given its title, they may well be seeking a bit of help from above too (and we don’t mean Derek Broadbent (right) who will be ensconced in the box on the balcony of the Opera House) as the French inspiration for the work comes from the Holy Trinity – Father, Son and Holy Ghost, which is symbolized on the four pronged cross (representing the four corners of the Christian world) by the three petals on the end of each arm.

It’s a lovely, if very difficult test piece that will take some playing by the best bands at this level – even if the North West does have some pretty impressive outfits on display here.

The bright opening movement, ‘Obal din lou Limouzi’ is followed by the simple beauty of the second, (later called ‘The Sweet Shepherdess’ when published separately), whilst the third is a bit of a Gallic free for all, which becomes increasingly complex and colourful.

Pin them all together and a trip to Cheltenham beckons: But it takes some doing.

The 14 contenders are headed by one of the most famous names in banding – Besses o’ the’ Barn, who is starting to make solid progress once more under the baton of Geoff Bradley.

5th place at Brass at the Guild Hall was a decent start to the season, and one on which they hope they can build here.

Crewe Brass just missed out on a qualification place last year so will be looking to go one better this time around under the baton of Jamie Meredith, whilst the vastly experienced Phil Goodwin will be looking to help push Delph up the results table.

The 2010 Third Section champion came 12th last year but showed good from in claiming a top six spot at Butlins in January.

Dobcross Silver won the Third Section in 2009 and ended last season by coming 8th at the Northern Open, so will be looking to make an impression directed by Kenny Pain, whilst Douglas Town makes the trip over the Irish Sea under the direction of new MD, Ken Mitchell after they made a solid debut at this level last year.

Eccleston Brass certainly showed good form at Brass at the Guild Hall in claiming a podium finish as they look to improve on last year’s 9th place, whilst Flixton will be hoping to carry on their recent run of good form after their solid showing at the Northern Open.
Another top six finish or better could be in their sights.

Karl Stott has done some great work with the ever improving Greenall’s and claimed promotion on the back of a 4th placed finish last year, whilst Haslingden & Helmshore has been a touch inconsistent here of late.

David Holland certainly knows how to get a band in good contesting shape though, as was shown in a podium finish at the Northern Open and a bold 4th place at Butlins in January.

The experienced Trevor Halliwell will certainly lead a confident Hoover (Bolton) after they won the Third Section title last year and went on to come 7th at Cheltenham.

Further good returns at the Northern Open and Brass at the Guild Hall see them as a well priced outside bet for a top six finish.

Middleton will be looking to up their form after a disappointing end to 2011 at the Northern Open and a inconsistent performance at Butlins where they came 14th, whilst Mossley should be the pre-contest bookies favourites after Duncan Byers led them to a cracking Butlins victory.

Can they make it a seaside double?

Tyldesley may have something to say about that if they produce the type of form that saw them win at Brass at the Guild Hall.

4th last year, they should be confident of being in the mix once again under Robert Taylor, whilst Uppermill, should also a good price with the Golden Mile bookies under the direction of Alan Widdop.

Runners up at Butlins and 5th last year – they will surely be a contender to watch out for again.

With such a difficult set work to challenge them, the title is up for grabs. Consistency may be the key, but there are a host of bands here who have shown just that over the past year or so.

Mossley was very good in claiming victory at Butlins – closely followed by Uppermill, whilst Tyldesley, Haslingden & Helmshore, Crewe Brass and Flixton should be chasing them all the way for a qualification place.

Our dark horse is Hoover (Bolton).