Chris Thomas talks to composer Paul McGhee ahead of the launch of his ground breaking musical celebration of 20 years of Derwent Brass.

It’s not often that a composer finds himself in the enviable and privileged position of being commissioned to write a twenty-minute work for brass band without the constraints so often imposed by the requirements for a test piece.

Yet that is exactly the position that Paul McGhee (right)) found himself in when Derby based Derwent Brass approached him for a new substantial concert work in celebration of the band’s 20th Anniversary.

In a highly enterprising move, the band was successful in securing funding for the commission from the Performing Rights Society for Music Foundation.

The resultant work, 'Episodes, Occurrences and Interludes' (subtitled ‘a journal of memories, mishaps, adventures and escapades’) will receive its world premiere by Derwent Brass, conducted by Keith Leonard, in the Landau Forte Theatre, Fox Street, Derby on Saturday 25th February.

4BR’s Chris Thomas chatted with the composer of the 2010 Swiss Nationals test piece 'Waiting for a Pain Hit!!!!' about his inspiration for the work and how it came into being.

Chris Thomas: Could you first of all tell us a little about how the commission came about?

Paul McGhee: I’ve known Keith and Chris Leonard for quite a few years now as we both played in Youth Brass 2000.

I had also helped Derwent out by playing at a few concerts and contests so we had been discussing writing a new piece for them since late 2010.

As time went on the plans became more and more elaborate until we finally started talking about producing an entire programme with the view of using it at entertainment contests.

Obviously funding is always going to be an issue, especially for such a large project, but Chris put together a brilliant proposal package and we were very fortunate that the PRS for Music Foundation liked it and decided to fund the project.

We got the notification in October 2011 so it’s been a very fast process of producing the music ready for the premiere concert on the 25th February.

Chris Thomas: To be given a brief to write a twenty-minute brass band piece with no test piece pre-occupations to consider must have been a liberating experience for you as a composer?

Paul McGhee: It’s been great and a really interesting project to work on.

There will always be limitations on what you do as a composer; you can instantly guarantee if you get twenty minutes to play with you’ll end up wanting thirty!!

Another consideration is to tailor the piece for the band.

As this is written for them, it was nice to be able to create parts to stimulate and interest the players without purposefully trying to trip them up!

As the piece is written especially for the band and will be used beyond the concert platform I’ve tried very hard to make the music challenging, but within each player’s playing abilities.

The great thing about having six pieces is that you can have fun linking the pieces and you have a lot of different moods and styles to do this with.

It was also very refreshing to be trusted by the band to write in my own style and not have to jump through hoops with the musical content or create a pastiche exercise of recently ‘celebrated’ tune mongers.

Chris Thomas: To what degree did Keith Leonard and the band stipulate what they wanted from the piece in advance?

Paul McGhee: Keith and the band have had a lot of success in entertainment contests (as well as others) so they have a good deal of experience in producing effective programmes for this format.

The basic stipulation was that it needed to fit (structurally) into what they feel is a strong programme.

They like a ‘crash, bang, wallop’ opener, a funky, upbeat piece, a solo item, a reflective number and then a vibrant finale.

It was mentioned right at the beginning that Keith loves a 'Bacchanale' so I knew that that was how the programme would finish at least!

Beyond that the band has been very honest and trustworthy to let me produce a piece that I wanted to produce.

Never during the writing process have they came back and said, “No, we don’t like that” or asked for it to replicate another persons style.

The whole process so far has been very smooth and extremely pleasing.

Chris Thomas: The six sections of the work are headed by some intriguing titles such as 'Bringing Down Etwall', 'Plaster First!', 'Abrahams Silent White Knuckle Night Cable Ride' and 'Dionysus Throws a Bacchanalia B.Y.O.B!!!'

Did the band give you the titles before you started work on the music and can you enlighten us as to their significance?

Paul McGhee: With regards to the titles of the pieces Keith (right) and the band had decided nothing before anything was written.

I decided right from the start that I wanted this to be a personal experience for the band and to have their identity ingrained into the completed work so that they would have something that would forever be associated with the band.

I asked the band members, both past and present, to send me stories of their times in the band.

These could be happy, sad, funny or mischievous; there was no story that I wouldn’t read or look to incorporate into the piece.

I then basically looked through all of their tales and tried to come up with usable stories to base the pieces on.

These stories also contributed to the titles, which I created to try and give the feel of what everything is about.

It seems like such a simple thing to do but I feel it has worked so well and given the band a relationship to the piece that will go well beyond its 20th anniversary year.

This, more than anything else, was really important to me and it seems to have worked very well.

Chris Thomas: How did you initially approach the composition and structure of the piece?

Paul McGhee: One of the great things about doing an entire programme is the ability to create continuity in the piece and coherence in the overall structure.

Having played and attended many entertainment contests and concerts throughout the years I’ve always felt that a lack of coherence in the music is a problem.

I therefore decided before a note was even written that I wanted to have a strong structure.

Rather than just simply write six pieces I wanted to make them all link with each other.

The six pieces are created in groups of two. 'Bringing Down Etwall' and 'Kerb-Side' run continuously; 'Abraham’s Ride' and 'New Doors' run without a break as do 'Torquay at Midnight' and 'Dionysus'.

This allowed the pieces to have more time to develop and allowed each of them to be related to each other. 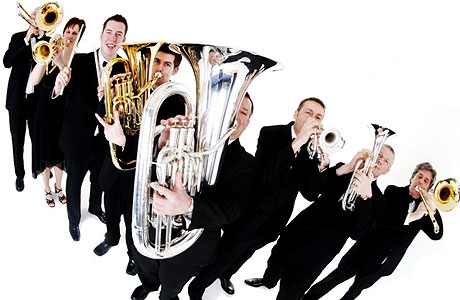 Chris Thomas: Your music can often draw its inspiration and influences from a wide range of sources.

'Episodes, Occurrences and Interludes' appears to be no exception?

Paul McGhee: I have quite broad musical tastes and rather than close myself off when I’m writing I try and listen to as much music and read as many books as possible whilst working on a piece.

There will always be something, somewhere that will influence me and most often than not I won’t even notice!

I constantly listen to the music of Frank Zappa but have found myself listening to a lot of Streetlight Manifesto, Sublime, Camper Van Beethoven, System Of a Down, 12 Stone Toddler and Man Man.

I didn’t notice it at the time but the more that I look at the score and listen to the piece I can see their fingerprints all over the music.

It’s also the same with the different literature I’ve been reading whilst writing Episodes.

'Rum Diary' by Hunter S Thompson, 'Snuff' by Chuck Palahniuk and 'Post Office' by Charles Bukowski are all in some way ingrained into the piece.

I find writing like this keeps me stimulated and gives me a pleasant distraction from the piece.

Locking yourself away in the office until a piece is completed is something that has never worked for me; I need distractions and this also seems to help to give me more ideas as well.

Chris Thomas: To what degree have you tried to unify the six sections of the piece, thematically or otherwise?

What I do tend to have is a melodic, harmonic and rhythmic palette that a certain piece will adhere to.

In this work there is a lot of melodic use of the tritone, semi-tone and major sevenths.

The use of these intervals is how I have tried to give the music its identity.

A lot of harmonic ideas throughout the piece are derived from the notes that can be found in the lead line.

These are techniques that are used throughout and it is only 'Torquay at Midnight' that is a little freer from this way of writing and is much more melodic than the material around it.

Was it always intended that the euphonium would be the feature instrument?

Paul McGhee: The band is lucky to have a very talented euphonium player called Adam Rutter who is often the featured soloist at concerts and competitions.

It was decided right from the beginning of the project to feature the euphonium as a solo instrument, not just because of Adam but more for the fact that two of Derwent’s key figures were former euphonium players in the band (Dougie Sheldon and Eric Johnson).

They were larger than life characters and many of the stories from the players in the band mentioned them.

I wanted to use the piece as a tribute to these two people that are obviously held so high in everyone’s thoughts.

Chris Thomas: Given the celebratory nature of the occasion the wild, Bacchanale of an ending gives the band an opportunity to let its hair down in style?

Paul McGhee: Hopefully, that was the plan at least!!

I wanted to create a modern take on the 'Bacchanale' and make it feel like a rowdy house party.

Knowing first hand how a brass band likes to ‘let its hair down’ after a performance, I thought that this would be an apt finale!

Chris Thomas: Do you anticipate the work having an ongoing life beyond Derwent’s initial involvement with it?

Paul McGhee: I hope so; it would be a great legacy of the event if the pieces began to pop up in the brass band concert repertoire.

The piece will stay with the band for 2012 and will then be published at the start of 2013.

The aim is to have the six-piece ‘set’ available but also to have each piece available individually as they work as stand alone pieces.

Hopefully brass bands in the United Kingdom will see this as an interesting venture and maybe look to commission more ‘sets’ of music from composers in the future.

Chris Thomas: Thanks for talking to us Paul and the best of luck to both yourself and Derwent Brass for the premiere.

Tickets for the concert (at 7.30pm with a pre concert talk by the composer at 7.00pm) are priced at £6 each and are available via the band’s website www.derwentbrass.co.uk or e-mail sales@derwent brass.co.uk

Neville Bros. Musical Instruments of Babbington Lane, Derby also have a supply of tickets and can be contacted on 01332 290762.