A touch of delicate French cross dressing lies in store for 13 powerful contenders... 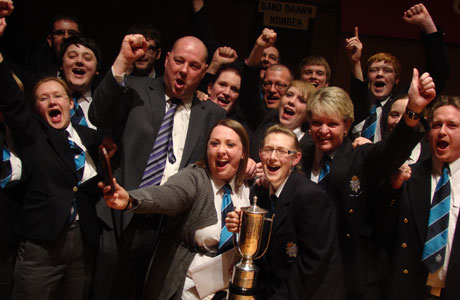 12 strong looking bands line up on Saturday morning looking to tickle the fancy of adjudicators Philip McCann and Philip Sparke (below right) with their musical knowledge of all things Gallic and Godly.

That may on the face of it be a difficult mix at the best of times (the music not the judges) so it will be interesting to see how these contenders get to grips with a stern test of their technical and musical abilities.

Yorkshire set two hardy qualifiers to Cheltenham last year who returned with a 3rd & 10th place to their name – the second year in a row that at least one has claimed a podium finish.

However, you have to go back to 2003 for the last time the White Rose flew in victory, so much for these rivals to aim for if they get through.

Strangely, there hasn’t been much early season form to call upon as a guide, as only two of the bands appeared at Butlins, whilst there are four promoted bands in the line-up as well as one returnee – and not one band that has been relegated from the First Section.

Those four promoted contenders are headed by Horbury Victoria, who won the Third Section in fine style last year under the direction of Duncan Beckley.

They then went on to be runner up at the Finals, so will head here with plenty of confidence.

Joining them at Cheltenham was City of Bradford, who was crowned Third Section National Champion under the direction of Lee Skipsey.

Winners of the Northern Open late last year, they will be one of the short priced favourites for a racecourse return.

Chapletown also gained their promotion after just missing out on that trip south.

Andrew Dennis led the band to the Third Section title in 2010 and built on that last year in coming 3rd. They started 2012 well too, with a 4th place finish at Brass at the Guild Hall.

The final band of the promoted quartet is Crofton Silver, who came 6th last year.

Kevin Belcher leads a solid outfit that has been building solidly since winning the Fourth Section title in 2007.

Meanwhile, Cornerstone Brass returns after failing to make it to the starting lineup twelve months ago.

They certainly made a mark at Butlins in January where they came 5th, so could be in good shape to push for a repeat of their podium finish in 2010.

Also looking to claim another podium finish will be Barnsley Chronicle, as they seek a Cheltenham return under the baton of Rob Straw.

They have posted increasingly impressive results in the last three years, whilst they delivered a solid account of themselves in coming 10th at the National Finals.

The experienced John Clay leads the developing Clifton & Lightcliffe who have been making solid progress since gaining promotion in 2010.

Another top six finish will be within their sights if they can play to form.

Meanwhile, the consistent Dodworth Colliery MW will be looking to claim a top six finish after slowly building their contesting confidence in the past couple of seasons.

A solid 11th place at Butlins was a good start to the season, with the promise of an even better return here.

Jason M Smith takes the baton at Lindley as they look to start moving back in the right direction after a disappointing 2011 saw them lose their Senior Trophy status.

5th place last year for the former Championship Section outfit could provide the foundation for a move up the results table.

The talented Tabby Clegg returns with Slaithwaite as they look to make a move towards their first National Finals appearance since 2008, whilst Strata Brass will be seeking their first podium finish since 2005.

St George’s Hall hasn’t been the happiest of hunting grounds, so the experienced David Holling will be determined to make an immediate impression on his Bradford debut with the band.

That just leaves Wetherby & District Silver, who are moving in the right direction under the baton of Alan Seymour and looking to build on their encouraging 10th place finish last year.

There are some impressive bands on show here, headed by City of Bradford, who showed that they have the potential to go a long way in a short space of time.

Another trip to Cheltenham beckons, and they could well be joined Horbury Victoria once more if Duncan Beckley’s knack of bringing the best out of bands at this level is appreciated in the box.

Cornerstone Brass showed plenty of solid quality at Butlins and should push the duo all the way, whilst Barnsley Chronicle, Strata Brass and Slaithwaite make up out top six selection box.

Our dark horse is the improving Dodworth Colliery MW.

Until 2008 competed as YBS Concert Brass