4BR has unearthed a remarkable account of Meltham Mills at the peak of their powers — and enjoying the fruits of their labour at their annual dinner — in 1877.

With the historic name of Meltham & Meltham Mills (right) returning to the Championship Section of the Yorkshire Regional Championship on Sunday, here’s a little reminder of  when the band not only ruled Yorkshire – but the entire banding globe...

On Saturday 27th January 1877 the then Meltham Mills Brass Band held their annual dinner in the dining hall of Meltham Mills.

It was reported in the Huddersfield Daily Chronicle on Monday 29th January 1877,  that, ‘a very good spread’ was provided by a Mrs Hollingsworth and several ladies of Meltham Mills, before A.C. Armitage Esq,  took the chair with Mr Gladney, conductor and instructor of the band to the his right, and a Mr E.H. Carlile to his left.

Before the annual reports could be given, a ‘glee’ entitled, ‘Spring Song’ was sung by Miss Stead and Mrs Coldwell of Brighouse with Mr E. Stead accompanying on the pianoforte.

Mr Stead then produced his report in which he stated: “The sum of prize money for this year does not amount to the sum of last year but that accounts for no contests where large amounts were given such as Pomona and Southport.”

This it must be remembered, despite the band winning the 1876 British Open Championship at Belle Vue for a second time in four years. 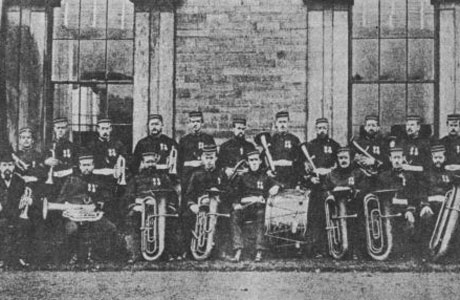 As to players, Mr Stead was fulsome in his praise: “The members of the band have laboured assiduously to make themselves proficient in music – not entirely for their own gain, but to make the band a credit to its neighbourhood.”

Mr Gladney was in his words: “An earnest painstaking instructor. He stands second to none, and more the members of the band know of him, the more they like him. He is ‘every inch a man’ and they hope will be spared many years amongst them.”

A certain Mr A. Owen, the solo cornet player was also worthy of praise: “His assistance to the band has been invaluable, and his quiet demeanour has won him the respect of all whom he has come into contact. They trust he will remain an ornament to the band.”

The A. Owen in question was none other than Alexander Owen.

Fair field and no favour

In conclusion he added the band would: “... offer the right hand of fellowship to all musicians whom they have met at contests during the past season, and all they desire is that they meet in friendly rivalry during the coming season, and as their motto is, “Fair field and no Favour”, they trust all will go on harmoniously, and the best band obtain the best result.”

At the contest, they also won a cornet, trombone and a medal worth an additional £45-2-0.

In all they had won seven of the twelve contests they attended in 1876.

It was also noted that it had cost the band on average £28-8-6 to attend each contest, whilst Mr Stead reported that, “under the tuition of Mr Gladney during the past six years, the band had obtained prize money to the amount of £1,951-4-6.”

(That’s the equivalent of over £143,000 using the retail price index in today’s money!) 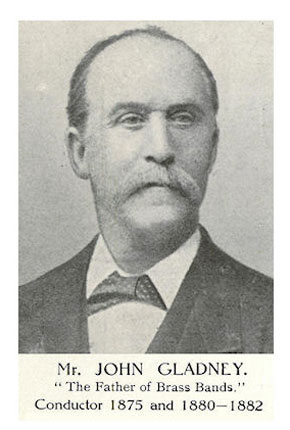 The Chairman then spoke, as the Huddersfield Chronicle noted: ‘... in an elaborate eulogy’, in which he stated, “Mr Gladney had told him that he was not ashamed to go with Meltham Mills to any part of the world as they would conduct themselves properly and treat everybody with respect.”

He was especially proud that the men had, “received a 5th prize and took it in a very mild manner.”

Mr Gladney then rose to speak, introduced by the Chairman as, ‘the right man in the right place.’

It was reported that when the cheers subsided, Gladney cleverly ensured he kept his players on his side by telling them; ‘He really could not help complaining on the band getting 5th place at the Blackburn Contest, for they did deserve better. He was proud of the manner in which they took it – giving no insult in any way but walking away like gentlemen.’

“It was the ‘crowning point’, he said. “All bands he conducted went in heart and soul for that contest.”

He then made two presentations: One to Mr Wright Stead and the other to Alexander Owen.

The reporter noted that; ‘Mr Gladney spoke of Mr Stead as a very painstaking man, and a very old member, for he had played Eb flat cornet for no less than 20 years. He was sure if ever a top note was wanted, Mr Stead was there with it.’

Cheers were heard in the room.

The came the presentation to Alexander Owen, of a beautiful cornet which was won at Belle Vue.

Gladney was reported to have said: “He could only speak of Mr Owen’s abilities as marvellous, and that he was only giving him his own cornet, for he had justly won it himself in sustaining the cornet parts of the piece played at the contest (‘Aida’). Mr Owen was now a bona fide member of the band, and he (Mr Gladney) sincerely hoped he would be spared a long time to sustain the part for which he played.”

There were more cheers.

Owen (right) thanked the members for their gratitude, and, ‘hoped he would use the instrument among them, and would look upon it as one of the greatest pleasures of his life’.

His response was greeted with applause.

With that, the Chairman couldn’t resist a quick snipe at rivals. “Linthwaite Band had published their annual report and had received only £307 in prizes from 16 contests”

He remarked finally with a poem that he felt summed up Meltham Mills Band:

“Who misses or who wins the prize,
Go, fall or conquer as you can;
But if you rise, or if you fail,
Be each, pray God, a gentleman,”

The rest of the night was given over to, ‘singing, recitations and capital songs’, whilst it was reported that Miss Stead and the rest of the glee party were ‘well deserving of the efficient manner in which they executed their duties’.

Under Gladney, Meltham Mills went on to secure the first ever hat trick of victories at Belle Vue, whilst Alexander Owen went on the follow his mentor in becoming the greatest brass band conductor of his generation – winning his first Belle Vue title at the helm of Black Dyke in 1880.

Meltham was barred from the Belle Vue contest for two years following their 1877 win, but returned in 1881, when under Gladney they came second to Black Dyke, again conducted by Alexander Owen. They did not appear again at the contest.

The band reformed after the First World War with the combined Meltham & Meltham name.