Scotland can boast one heck of a lot of Olympic champions, but can any of these bands go on and claim a medal at Cheltenham? 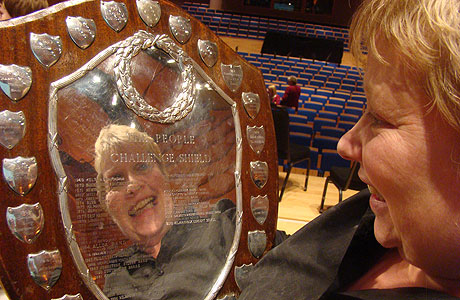 Only one Scottish band has lifted the Third Section National Championship trophy this century, and that was an honour that fell to Kirkintilloch Kelvin Brass in 2000.

That should be something of an inspiration for many of the competitors here this weekend, as they have since gone on to be a successful First/Championship outfit – something that in well within the grasp of these talented bands and MDs.

And there could hardly be a greater inspiration to do that than on Philip Harper’s enjoyable sporting micro-epic, ‘Olympus’.

Last year’s qualifiers ended up in 5th and 10th so even though another gold medal winning prospect for Cheltenham may seem a little bit of a long shot, things are on the up.

David Thornton and John Doyle (right) will be the men passing judgement on the musical athletics in a contest that on the evidence of recent form could prove to be one of the closest of all of the sections in this year’s Championship.

Barrhead Burgh under Brian Keachie has not competed since the band’s drop from the Second Section last year, so will be looking to prove a point or two as they shoulder up to the Third Section competition.

Meanwhile,  David Neil and Buckhaven & Methil Miners will be looking to build on a solid 5th place finish last year and a creditable 10th at the Borders Entertainment contest in November.

Dumfries Town, came up to the Third Section last year and will look to start moving further forward after ending in 9th, and then posting a solid 10th place at the Scottish Challenge Shield.

Meanwhile, Jedforest Instrumental and Phil Rosier will be sure to want to do the same and more after narrowly missing out on qualification spot in 3rd place last year.

The indefatigable Alan Fernie will be hoping to guide the ever improving Langholm Town further up the results table after coming 8th last time, no doubt helped by a decent showing at the Borders Entertainment contest.

Also looking to do the same will be MacTaggart Scott Loanhead who should be confident of making a real impression following their Fourth Section victory last year and a very solid finish at the National Finals in Cheltenham.

Peebles Burgh has been a consistent mid-table finisher for the last couple of years, a record MD Alex Knox will be looking to build on after a none too shabby 12th place at the Borders Entertainment contest.

Meanwhile, Perthshire Brass is sure to be confident contenders following a 9th place finish amongst tough competition at the Scottish Challenge Shield and a strong 4th place here last year.

Renfrew Burgh has only played once competitively since last year’s event; finishing 9th at Brass in the Park in September, so it’s odds on MD Mark Good will be out to better last year’s 7th place.

Selkirk Silver is another band that will play under Alan Fernie’s baton, hoping to make a swift return to the Second Section after relegation in 2011 and a disappointing 15th place at the Borders Entertainment contest.

That just leaves newly promoted Tayport Instrumental under Frank Culross, a band that deserves a generous helping of good luck after qualifying for the Fourth Section final in Cheltenham only to be forced to withdraw from the big day.

Of all five sections in Glenrothes, this could be the closest to call, with a batch of bands having a serious opportunity to seize their qualification places for Cheltenham.

We are going with Jedforest Instrumental by the narrowest of margins from Selkirk Silver, Perthshire Brass and Barrhead Burgh. Buckhill and Peebles should make up the top six for us with our dark horse of MacTaggart Scott Loanhead.

Last competed in 1994 in Fourth Section.