The Midlands provides a field of 17 would be Olympians trying to reach Cheltenham this year. 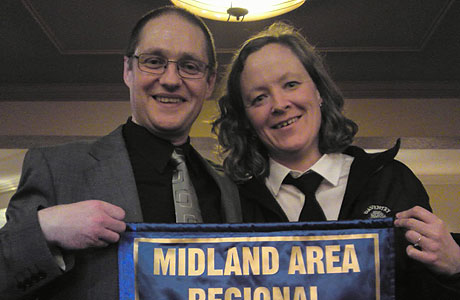 Daventry duet for the 2011 winners

With the eyes of the sporting world fixed on London later this year, the eyes of the banding world look to Bedworth on Saturday, where the Third Section Cheltenham hopefuls battle it out to gain the three priceless qualification places that are on offer thanks to Philip Harper’s filmatic treatment of Olympic history.

It’s rather fitting then that those who do obtain gold, silver and bronze thanks to the scrutiny of the judges Barry Thompson and Malcolm Brownbill (below right), will also get modest cash sums and an invitation to play at Cheltenham in the autumn.

To these bands, there is no prize greater.

‘Olympus’ is proving to be a stern challenge to podium aspirations.

It’s a colourful representation of the original Games that took place in Ancient Greece, with a score that allows the players to feel the nail biting excitement of battling it out for the exhilarating glory that comes with victory (although only the one band will taste the celebratory champers on Saturday)

So who will claim their place at Cheltenham?

The in- form Stamford Brass will be hoping to get over the finish line first and build on the excellent runners up spot they grabbed at Butlins in January.

After three years in and around the top six here, MD Robert Prew should lead a confident band into battle.

Last year’s winners Daventry Brass will look to the leadership of former Kibworth sop star Bob Stradling to defend their title in style.

They ended in 14th place at Cheltenham, but that experience should hold them in good stead as they seek a quick return to the Finals.

Wem Jubilee and Ibstock Brick Brass are among the newbies this weekend, after falling through the relegation trap door from the Second Section.

Wem could possibly count themselves unlucky after coming 7th in a section that boasted only 11 bands, although Ibstock did end plumb bottom and didn’t enjoy a great outing at Butlins earlier this season either when they came 13th.

Both have talented MD at the helm, so should be confident of an upturn in fortunes.

Rushden Windmill came 5th last year and posted a 4th place finish at the Leicester Contest in November, so should be confident of posting yet another top six finish under the baton of horn star Nathan Waterman.

Meanwhile, other bands that enjoyed success at Leicester were Rolls Royce (Derby) and Hucknall & Linby MC.

More of that form could see both in with a good shout of a top six finish or better.

Fairfield (Buxton) and Rushden Town were promoted from the Fourth Section and will be looking to make an immediate impression.

Fairfield’s last appearance at this level was back in 2006, whilst Rushden has been making solid progress in the last few seasons under a succession of experienced MDs.

Arrow Valley will be hoping to improve on last year’s 6th place under the direction of MD Paul White, as they look to gain promotion back to the Second Section, whilst Long Eaton Silver come to the contest on the back of a successful run out at Derby.

Of course, they were the only band at the NEMBBA Contest in the Third Section, but a win is a win – and MD Sharon Stansfield won’t mind another one of those this weekend.

City of Birmingham and Stourport on Severn return under Warren Belshaw and Mike West respectively after failing to make it to the starting line up last year (Stourport didn't make it in 2010 either), whilst Croft Silver will be looking to build on last year’s encouraging performance under the baton of Ian Needham, despite a disappointing return at Butlins.

2008 winner Cubbington will be conscious that they may need to take a few scalps to avoid any possible threat of relegation, whilst Shipston Town will be looking to build on a very solid performance last year when they came 10th on their return to the section under Howard Gibbs.

That just leaves the good lads and lasses of West Mercia Police who will be directed by Alywn Green – surely called ‘Alwyn of Dock Green’ by some wag in the ranks.

They will be looking to claim a top ten finish this year after ending 12th last time out.

A hard one to call, but Rob Prew is an MD reborn and should enjoy another taste of success with Stamford Brass if they hit top form.

We thnk they will be pushed hard though by both Daventry and Wem Jubilee in the race for the top three qualification places, with Rushden Windmill, Hucknall & Linby and Rolls Royce (Derby) not far behind. Our dark horse is Ibstock Brick Brass.