Whoever claims the gold and silver medals on Philip Harper's test piece will head to Cheltenham. 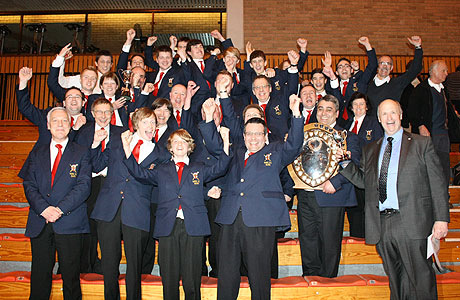 Who will enjoy the same feeling as York did 12 months ago here?

Only a truly Olympic effort will do for any of these bands if they are to qualify for Cheltenham.

Those who do manage to claim either gold or silver will, courtesy of adjudicator Mike Kilroy (below right), receive an invitation to the National Finals in Cheltenham, where they will be able to test their mettle against the very best competitors in the UK.

Philip Harper’s ‘Olympus’ may well be all about the original Olympic Games held in Greece, but if the bands take inspiration from London 2012 then there is every chance they can capture the essence of the piece and come away with a victory.

Bold and colourful, full of energy, great tunes and plenty of rhythmic pulse, it has proved to be a hit with performers and listeners alike.

Those who have really entered into the spirit of the cinematic music have invariably found reward.

The region’s bands have found fleeting reward nationally over the years although encouraging performances have been noted at contests around the country.

Last year’s Cheltenham qualifiers came 8th & 9th respectively, a bit of a disappointment as it was the first time since 2008 that at last one hadn’t made it into the top six.

So which of these nine contenders has that real Olympic quality to reach the National Finals?

Ripon City, will look to continue the good form they showed last year when they qualified under the direction of Malcolm Dibb.

They posted a solid 8th place at Cheltenham to emphasise the progress they have been making in the past three years here, which has now seen consecutive podium finishes.

Meanwhile, Billingham Silver will look to quickly adapt to their new surroundings following their relegation from the Second Section and will hope to build on their 5th place in the B Section at the recent Durham contest, whilst Bearpark & Esh will also hope to do the same after coming 4th there.

They last qualified for the National Finals way back in 2001, so a return journey is long overdue for the band, although they weren’t too far away last year in coming 4th.

Promoted Backworth Colliery will be led by the vastly experienced Duncan Beckley as they seek to build on an encouraging 12th place at Butlins, whilst East Riding of Yorkshire may be a good each-way bet to secure a Cheltenham trip after coming 3rd last year.

Meanwhile, the consistent Marske Brass will look to build on their 6th place finish at the Durham contest.

The brilliant youngsters at NASUWT Riverside Concert will certainly have a great time once more as they take to the stage under the baton of Bryan Tait.

They were classy winners of the Fourth Section last year and went on to post a fine 12th place finish at Cheltenham.

A year older for certain, and year better then? If they are then watch out.

That leaves the two returning bands in Kirkby Lonsdale and Stape Silver, both who failed to make it to the starting line 12 months ago.

Hopefully they both return in good player health, as Kirkby certainly showed that they have the playing talent to do well here in winning the Forth Section title in 2009, whilst Stape followed in their footsteps in 2010.

We are pinning our medal hopes on the duo of Ripon City and Billingham Silver, appropriately enough.

However, we think they could well be hased all the way to the finishing line by the youngsters at Riverside and the more mature rivals of Bearpark & Esh, Backworth Colliery and East Riding of Yorkshire.

Our dark horse is the returning Kirkby Lonsdale.

Bearpark and Esh
Conductor: A. Hall