Iwan Fox looks back at Foden's 1913 triumph to see if history can repeat itself this weekend? 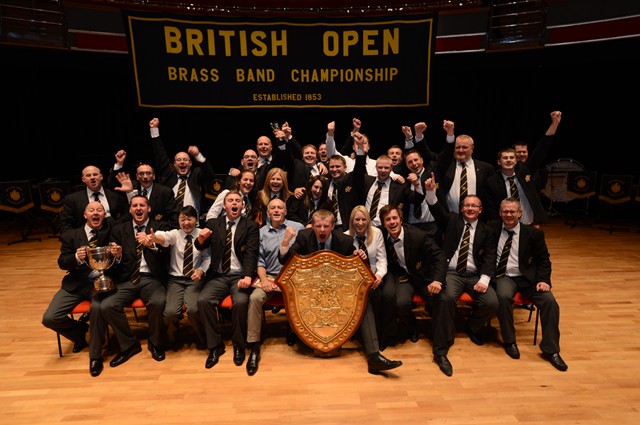 Another happy ending for Foden's?

History can have both a happy and unhappy knack of repeating itself.

International skirmishes were leading Britain headlong towards the carnage of the First World War. A century later and the spectre of major conflict once again fills the air - albeit in the Middle East.

The 1913 Open was played out against domestic demands for Irish Home Rule and Women’s Suffrage.

Further afield, storm clouds grew darker by the day as the lingering effects of the Second Balkans War unhinged the uneasy detente that hung in the balance between the empires of Europe.

A whole generation of bandsmen would soon be lost amid the slaughter.

Their number was to include Edwin Firth, perhaps the finest brass band cornet player of the age, who on that sunny Monday afternoon led Foden’s Motor Works Band in the successful defence of their British Open title.

Although no research has been done into just how many men from the 20 bands that took part that day were to become casualties of the Great War, the full lists of players which appeared in the programme surely contained the names of many who were to perform in perhaps their last Open contest.

Unknown to them all as they waited their turn to play the test piece ‘A Souvenir of Gounod’ - from Shaw (drawn number 1) to Haworth Public (20), not a single band would remain untouched by the deadly battle of rivals that was to come.

The Foden’s players were determined to retain the Belle Vue Challenge Cup won at the 1912 Diamond Jubilee contest, and to add further personal medals to the ones they were presented with.

They approached their defence in confident mood, having just made their first commercial gramophone recording and having appointed a new Bandmaster in Tom Hynes to prepare them for the visits of the great William Halliwell from Wigan.

In April they had performed a Royal Command performance for ‘Their most gracious Majesties the King and Queen’, as royalty paid a visit to Crewe Hall (home to the Marquis of Crewe). 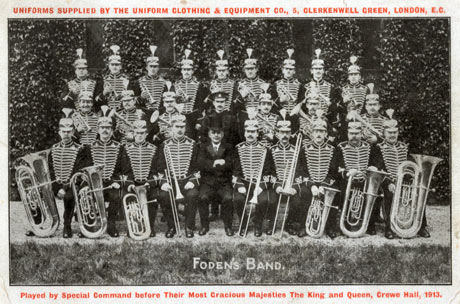 Foden's Band in their 1913 Prussian uniforms

Such was the prestige of the occasion that Halliwell made a rare concert appearance with the baton, with the players wearing their new Prussian style uniforms topped with plummed hats.

The music performed had a very Germanic flavour – from the overture ‘Bohemian Girl’ to the selections from ‘William Tell’ and ‘Tannhauser’.

Within a year things were to change forever.

By the time of the 1914 contest the Prussian uniforms had been dumped and the musical content at Foden’s concerts became much more patriotic.

By 1917 even the Royal family had changed their name from Saxe-Coburg-Gotha to Windsor.

However, such future concerns were not in the player’s minds as they milled through the thousands of supporters who had made their way to Manchester for the start of the afternoon’s contest entertainment.

At their helm William Halliwell stood supreme – the most sought after conductor of the age.

He directed nine bands on the day – including those who eventually filled five of the top six places in the results.

His first, Shaw, opened the contest from the number 1 draw with a terrific performance that certainly impressed the trio of adjudicators in the box – Charles Godfrey (the arranger of the test piece – as he had been since 1872), Carl Kiefert (Musical Director of the Gaiety Theatre in London) and Mr J.O. Shepherd from Liverpool. 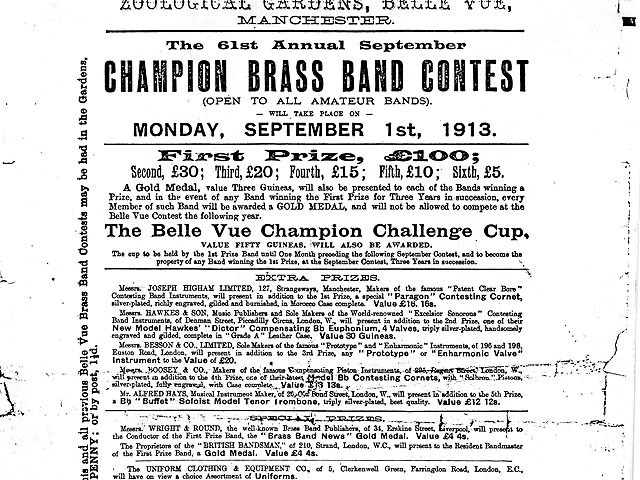 As the contest developed, the Foden’s players (drawn 16) sat outside the hall in the sun, waiting patiently as rivals emerged from the contest cauldron, their faces etched with delight or disappointment.

Inside, Shaw remained the band to beat as the title chances of others were scuppered by errors and mistakes.

Former champions Wingates, Irwell Springs, Black Dike (the name didn’t change until later), Wyke and Lindley all failed to impress sufficiently to edge them out, whilst the emerging talents of Crossfield Soap Works and St Hilda Colliery also fell short.

By the time the Foden’s players took to the stage, many in the packed audience were beginning to feel that the Belle Vue Champion Challenge Cup (valued at 50 guineas) and the £100 first prize was destined for a new home in a village just outside Oldham.

Foden’s were in no mood to relinquish their title, and with a performance of outstanding quality, led from the front by Edwin Firth in majestic form (winning him a ‘Paragon’ cornet worth £16 16 s for his efforts), the cup returned to Sandbach for the fourth time in five years – much to the delight of the company Managing Director Edwin Richard Foden.

As the Foden’s players celebrated, the audience left for home clutching the newly printed list of prize winners (price 1 penny).

The players who had successfully defended the title were as follows:

The very next day the Manchester Courier breathlessly recalled the triumph under the heading ‘FODEN’S WAGGON WORKS AGAIN CARRY OFF TROPHY’.

“There was a record attendance at the Zoological Gardens, Belle Vue, Manchester, yesterday, the occasion being the sixty-first annual September Championship Brass Band contest, open to all amateurs.

The entries numbered 20, and the competing bands included many old favourites and previous victors.

The test piece was ‘A Souvenir of Gounod’. The fact that since the closing of the entries the monetary value had been doubled and amounted to £100, carrying with it the challenge cup, it rendered additional zest to the efforts of the competitors.

The judge’s opinion of the whole contest was that it was better than they had experienced for several years.

Bands generally had a partiality for Gounod, and the players yesterday showed an intelligent conception of the arrangement, several rendering it with marked effect.

“Without doubt,” remarked had Lieut Godfrey, “Lancashire and Yorkshire possess the finest bands in the country, and they are the most musical counties we have.”

The large hall in which the contest took place and which is capable of seating 5,000 people was crowded from the start at one o’clock to the close at half past six, and the audience were not only intent upon the performances of individual bands, but highly critical.

The report ended with the result:

Will history repeat a happy ending for Foden’s this year then?

We will have to wait and see.