Roy Terry reports from the south of France where Brass Band Mediterranee is making a musical mark with its artistic endeavours. 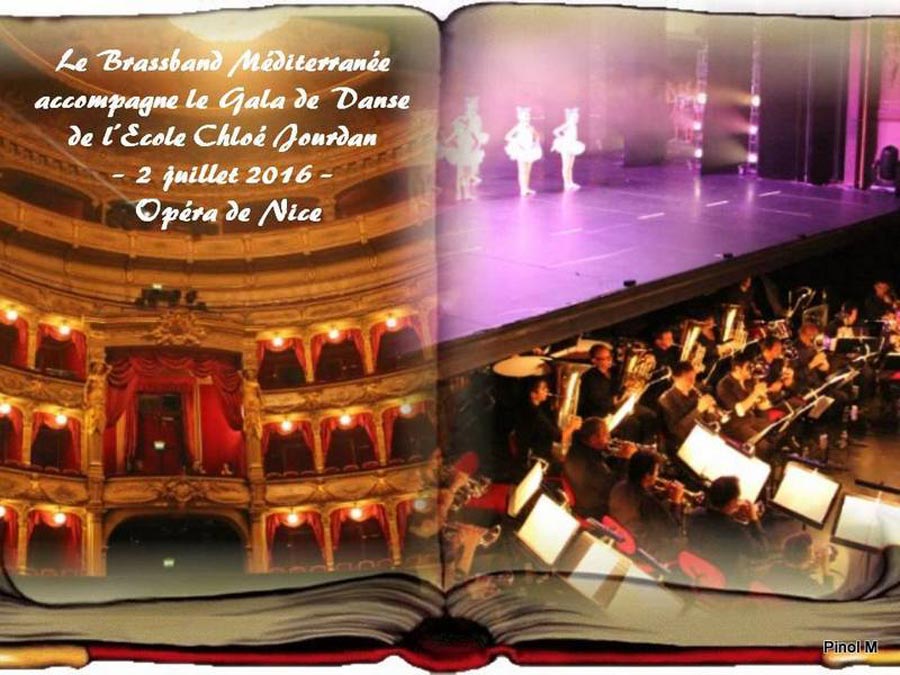 One of the delights of being an adopted member of the Brass Band Mediterranee family is that they can invite you to some surprising places to enjoy their performances.

One memorable occasion was a beautiful lakeside concert which involved trekking up to the top of a mountainside. That wasn’t too bad for most audience members, but you did feel sorry for some of the lower brass players from the band, when you glanced across to a parallel footpath to see them hauling their instruments up on the backs of a mule train!

There making the long hike to the summit was their ex-pat bass trombonist, who started his playing alongside Tony Swainson and their featured euphonium soloist just back from studying at the Royal Northern with Steven Mead. That’s what I call banding commitment.

Meanwhile, the local dignitaries had no such problems - with a helicopter appearing over the brow of a peak to deliver the guests of honour, the Mayor of Nice and Prince Albert of Monaco, whilst the welcoming town band from Sienna, complete with banners, was already perched on the summit. 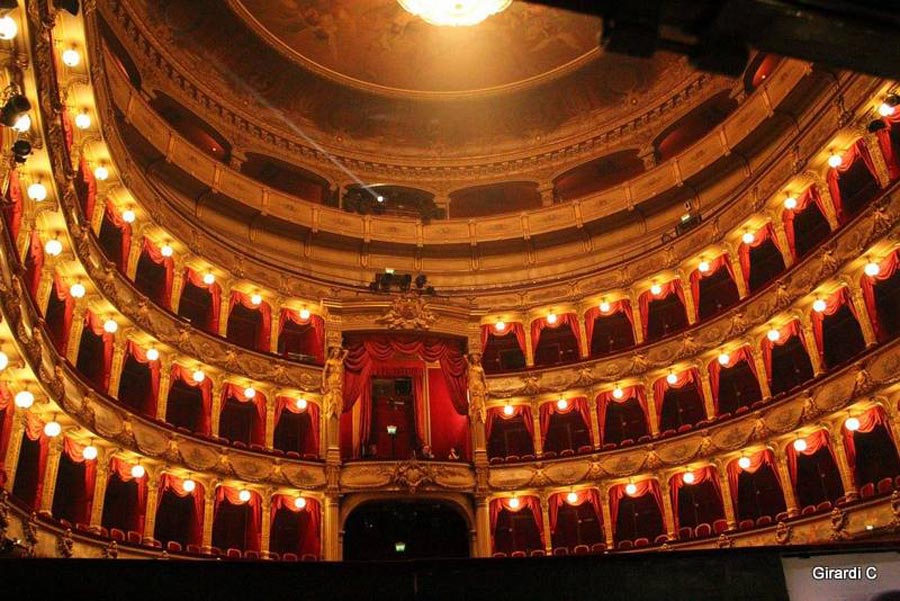 A venue to send a shiver down the spine

That concert rather summed up Brass Band Mediterranee - a wonderful organisation celebrating its 15th anniversary this year – and one that over the past decade and a half has established itself as a high profile participant in the musical life of the Cote d’Azur.

It regularly plays at the acclaimed annual free weekend of classical music concerts and recitals at the city’s congress centre in Nice, and is funded every year by the Regional Council to play as part of the summer season of concerts in the hill towns and villages of the Alpes Maritimes. 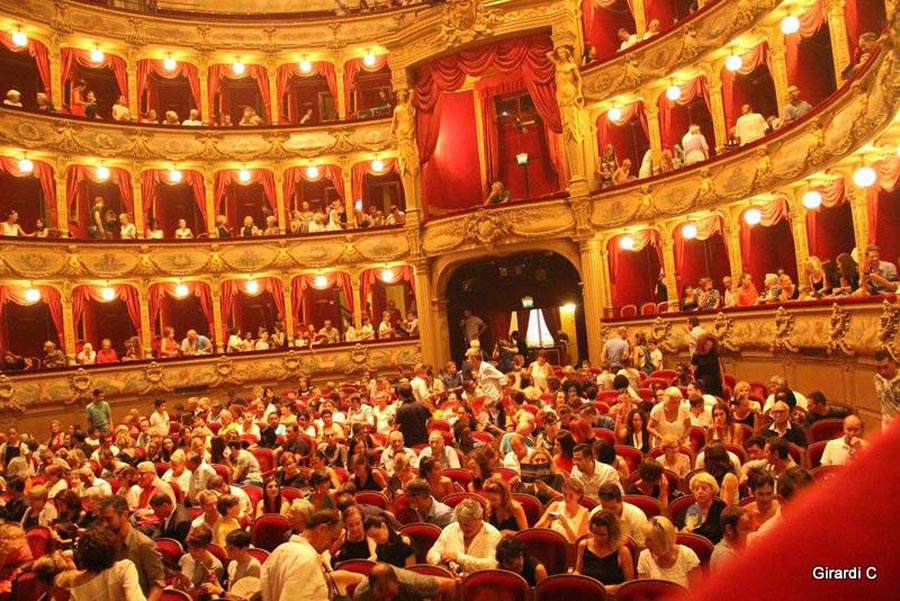 An expectant and enthusiastic audience filled the seats

Founded by Gerard Hostein, it has previously toured Brazil, where its founder Gerard Hostein played professionally and taught before coming to Nice, initially as a member of the trumpet section of the Nice Philharmonic before taking up the role as a deputy director of the Antibes Conservatoire.

Earlier this year Gerard passed the baton to Olivier Mauny, who plays trumpet with both the Nice Philharmonic and the Monte Carlo Philharmonic, who led the band’s summer season of concerts in Villeneuve-Loubet, Grasse and the ski resort of Isola 2000, funded by the Alpes-Maritimes Council. 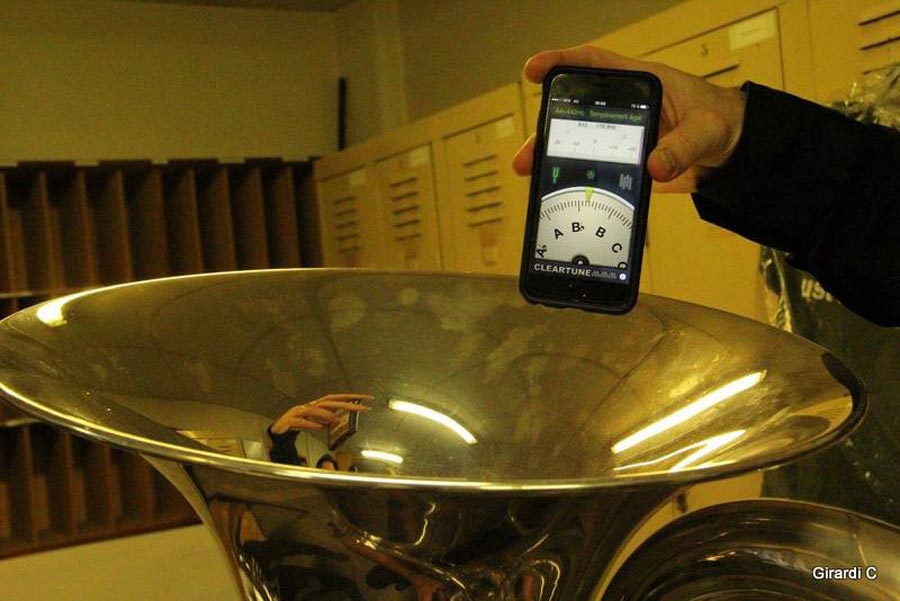 And so to Mediterranee’s latest surprise - where on this occasion I found myself in the orchestra pit with the players at Nice’s prestigious Opera House.

Hot on the heels of Tredegar Band performing at Sadlers Wells with Rambert Ballet, Brass Band Mediterranee was also collaborating on an innovative dance project. 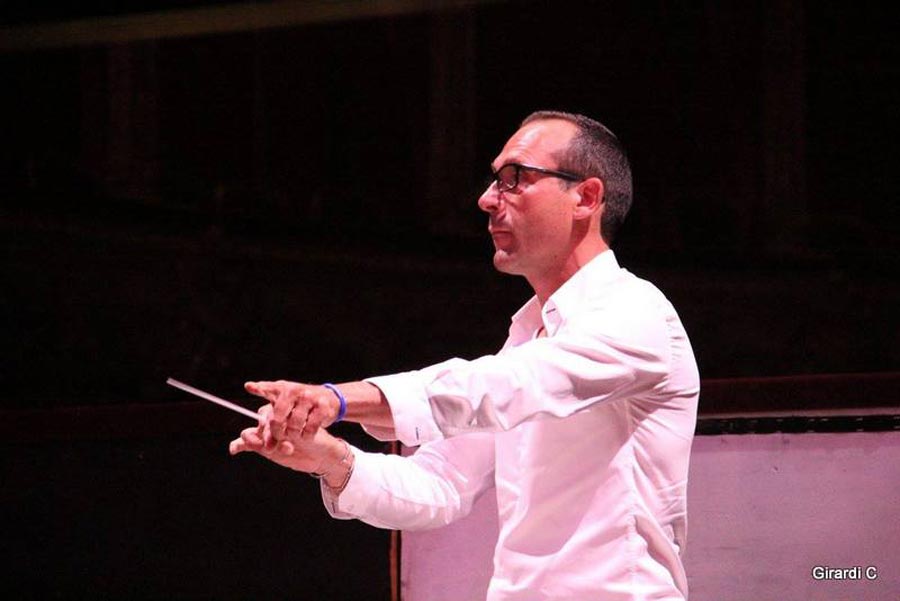 Nice has enjoyed having an opera house since 1776.  The second house to be built burned down as the result of a gas leak in 1881, and the present wonderful venue opened in 1885.

It was designed by the architect Francois Aune in typically ornate style in collaboration with Charles Garnier, architect of the Palais Garnier Opera House in Paris and is the home of Nice Opera, Nice Ballet and the Nice Philharmonic. 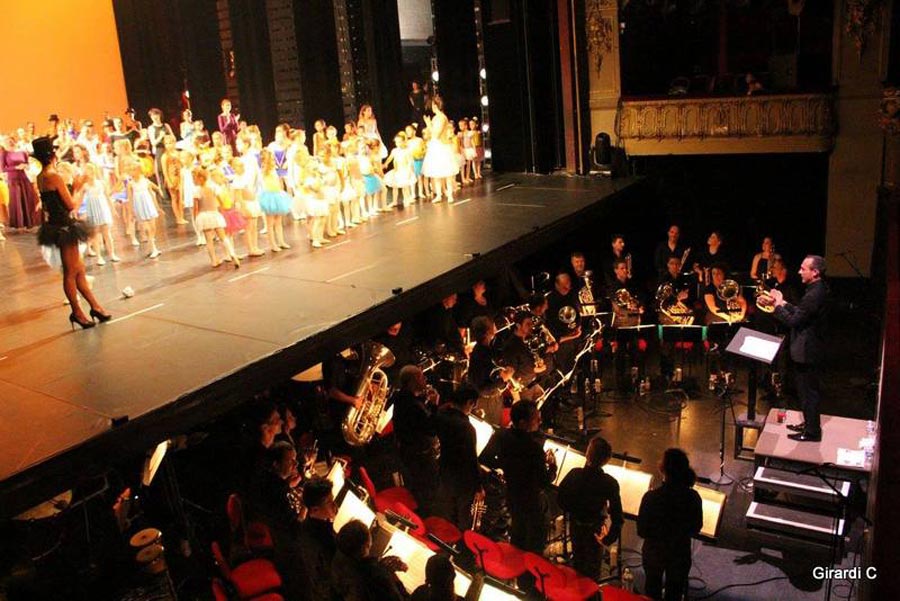 All in perfect time

On this splendid occasion, the band was in the pit to play for a dance gala presented by the Chloe Jourdan School Dance School.

Although the pupils and students range in age from delightful three year-olds to uber-confident twenty-something’s, this is no ‘ordinary’ dance school.

The fact that it was granted use of the Nice Opera stage is testimony to its incredibly high standards, with Chloe Jourdan choreographing a range of music from Walt Disney films. 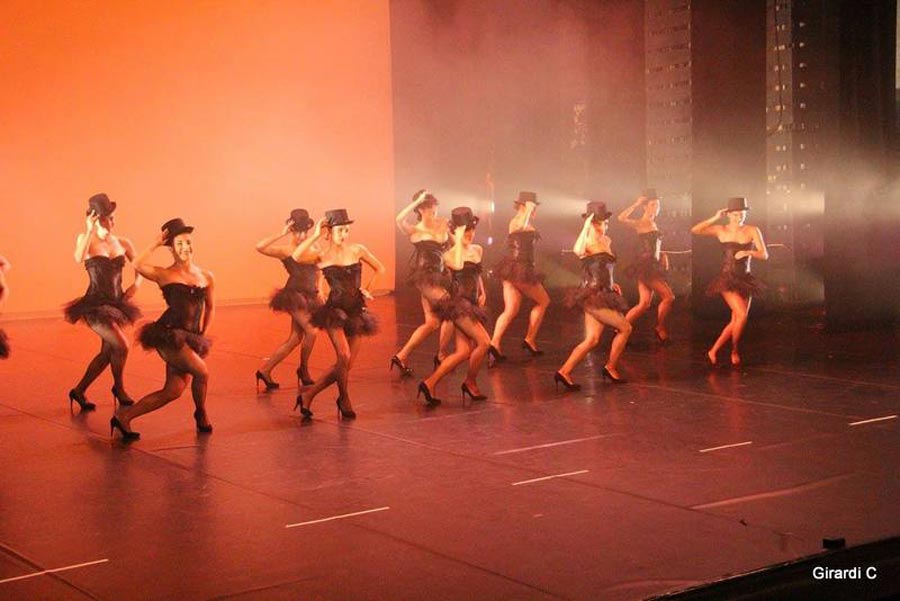 Accompanying dance for the first time is a major new demand on any ensemble and conductor, but both the band and Olivier Mauny more than rose to the occasion.

The event was particularly testing for the band because the dress rehearsal took place on the afternoon of the performance.

I was on hand to advise on questions of balance and co-ordination, especially as a brass band playing in the pit in the acoustic of a nineteenth century opera house presented unique challenges, especially for the younger players.

Just gazing up at the ranks of velvet-clad boxes of the opera house was awe-inspiring enough! 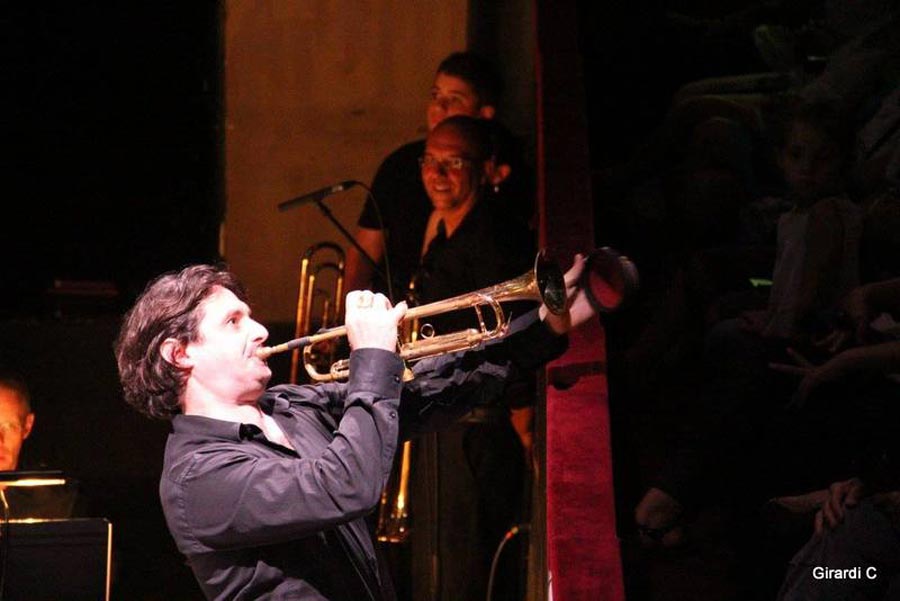 Time for a bit of a trumpet solo

Clearly, many in the near-capacity audience had family connections with the dancers and responded accordingly, but, just as with Tredegar at Sadlers Wells, so it was in Nice, where an audience mostly encountering a brass band for the first time responded with unbounded enthusiasm.

Such has been the response that riding on the success of this event there is now the future prospect of collaboration with the resident professional Nice Ballet. 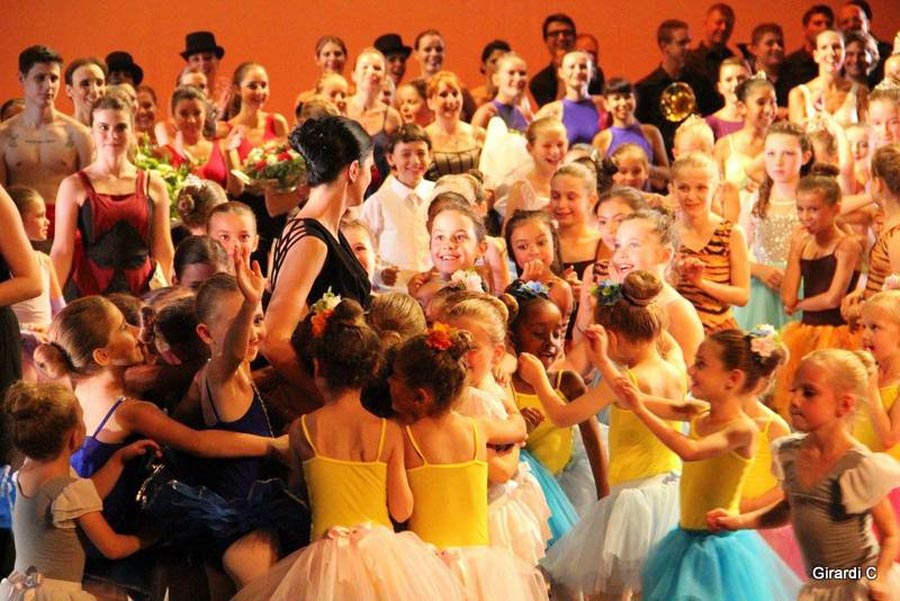 Happy smiles all round

Limitations mean that they normally have to perform with recorded music, but with the major advantage of a brass band of appropriate musical quality right on their doorstep, it is one that is filling everyone with endeavour and enthusiasm.

In fact, I am currently in discussion with Olivier Mauny about brass band repertoire which has the potential to be choreographed - so watch this space! 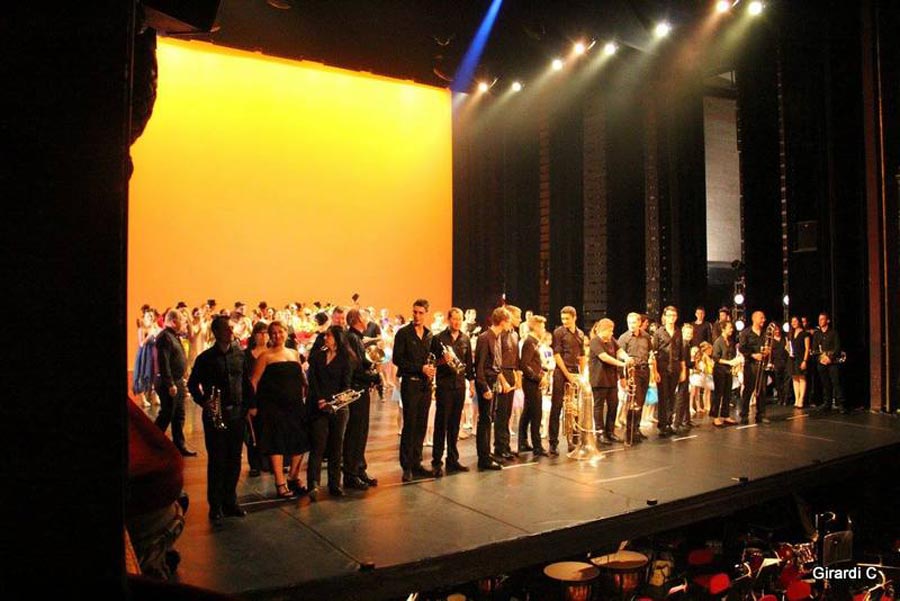 French brass banding is progressing at an amazing rate - with artistic projects such as Paris Brass Band’s forthcoming trip to South Korea forming the core of their future musical endeavours.

I have been fortunate to witness this explosion of talent over the years - from mountain tops to beautiful opera houses, and with further invitations to work with other bands I feel the future for French brass banding is highly encouraging.

There is certainly a keen musical appetite for it.