What unites us in music
2016 British Composer Awards

Roy Terry reports on the sense of reflective inclusion at the British Composers Awards in London — highlighted by Shri Sriram and Hammonds Saltaire winning the the Brass and Wind Band category with their cross-genre collaboration 'Just A Vibration' .

In his introduction to the evening, Tristram Hunt, the Chairman of the British Academy of Songwriters, Composers and Authors (BASCA), suggested that fifty years ago the thought of the United Kingdom producing an internationally significant roster of composers might have been regarded as ‘a bit of a joke’.

In comparison, the compositional achievement on display in 2016 was seriously remarkable - significant in its wide-ranging and diverse creativity.

As a result Mr Hunt gave due credit to the BBC amongst others for its crucial role in fostering and broadcasting the work of a new generations of composers - and while there were some familiar names among the shortlisted composers this year, half were bring shortlisted for the first time. 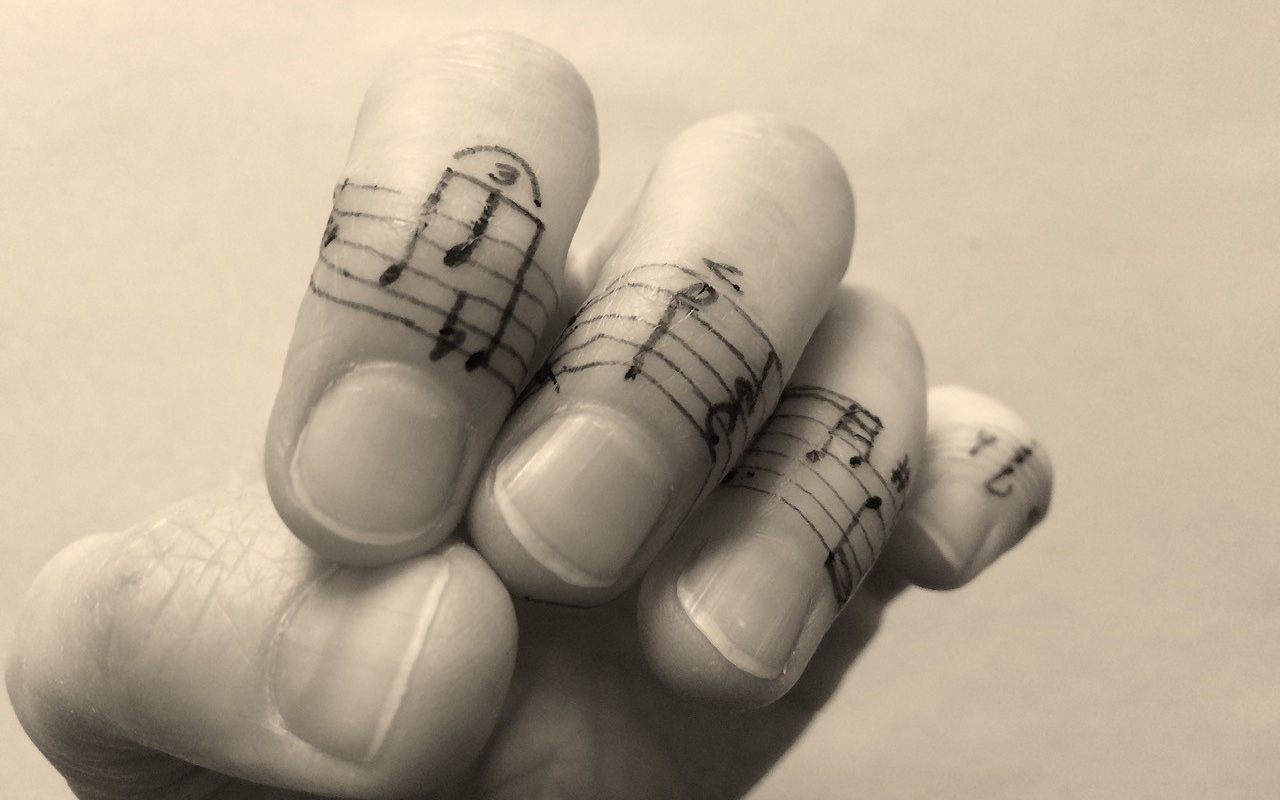 Creativity was celebrated this year such as by composer Claudia Molitor

Speeches at the British Composer Awards ceremonies are not filled with Oscar-type vapidity; in part because more of the current generation of composers are politically engaged in a way which was not perhaps as commonplace fifty years ago.

In his keynote speech composer Gerard McBurney was unapologetic that what he had to say was prompted by what he called, “...the current whirlwind in the political world”.  He was emphatic in his belief that music is inevitably connected: It can’t be used as escapism from the rest of the world.

He also saw the contemporary mood as difficult for composers because the labels ‘intellectual’ and ‘elite’ have become badges of shame in the context of what he referred to as, ‘the current gaudy firework display of intolerance’.

He provocatively challenged ‘too-easy thinking’ about diversity and inclusion; which he suggested was aimed at the individual finding themselves reflected in the music presented to them. It was as if they listener had to be surrounded by a wall of musical mirrors.

“On the contrary,” he added. “Music should take us on a journey to worlds far beyond ‘myself’. Strangeness rather than familiarity should be the goal - and ‘make it strange’ a fitting slogan for the composer.”

The awards are divided into twelve categories; from solo compositions through choral and orchestral to contemporary jazz and sonic art. 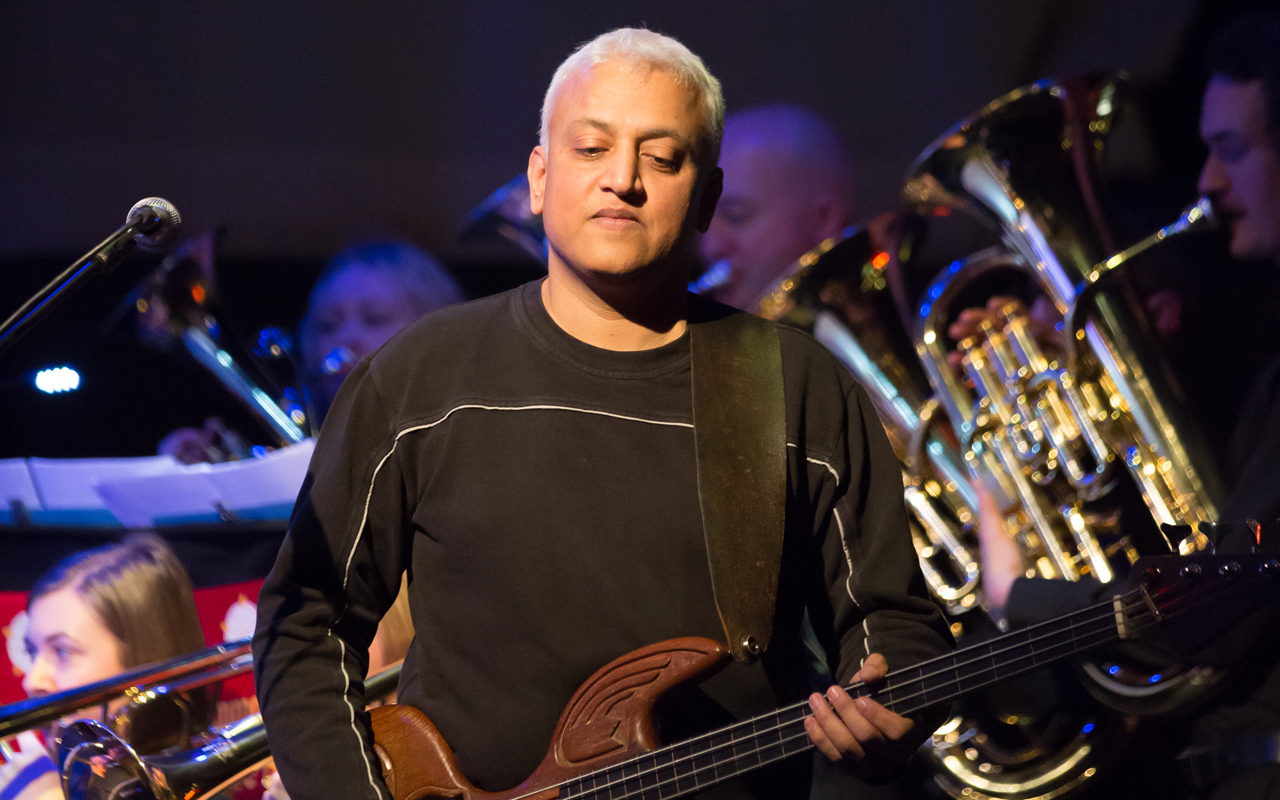 As reported on 4BR, the winner in the ‘Brass & Wind Band’ category was Shri Sriram for ‘Just A Vibration’ - the innovative, cross-genre collaboration with Hammonds Saltaire Band, which has received wide exposure in performances at the Huddersfield Contemporary Music Festival to the London Jazz Festival and beyond.

The other brass band work to be shortlisted in this category was Fumiko Myachi’s ‘Au79’, who already has commissions from the BBC Singers and Opera North among others.  ‘Au79’ (Gold) is part of her Transitional Metal Series arising from her fascination with the periodic table.  It was premiered by the Birmingham Conservatoire Brass Band under Ian Porthouse. 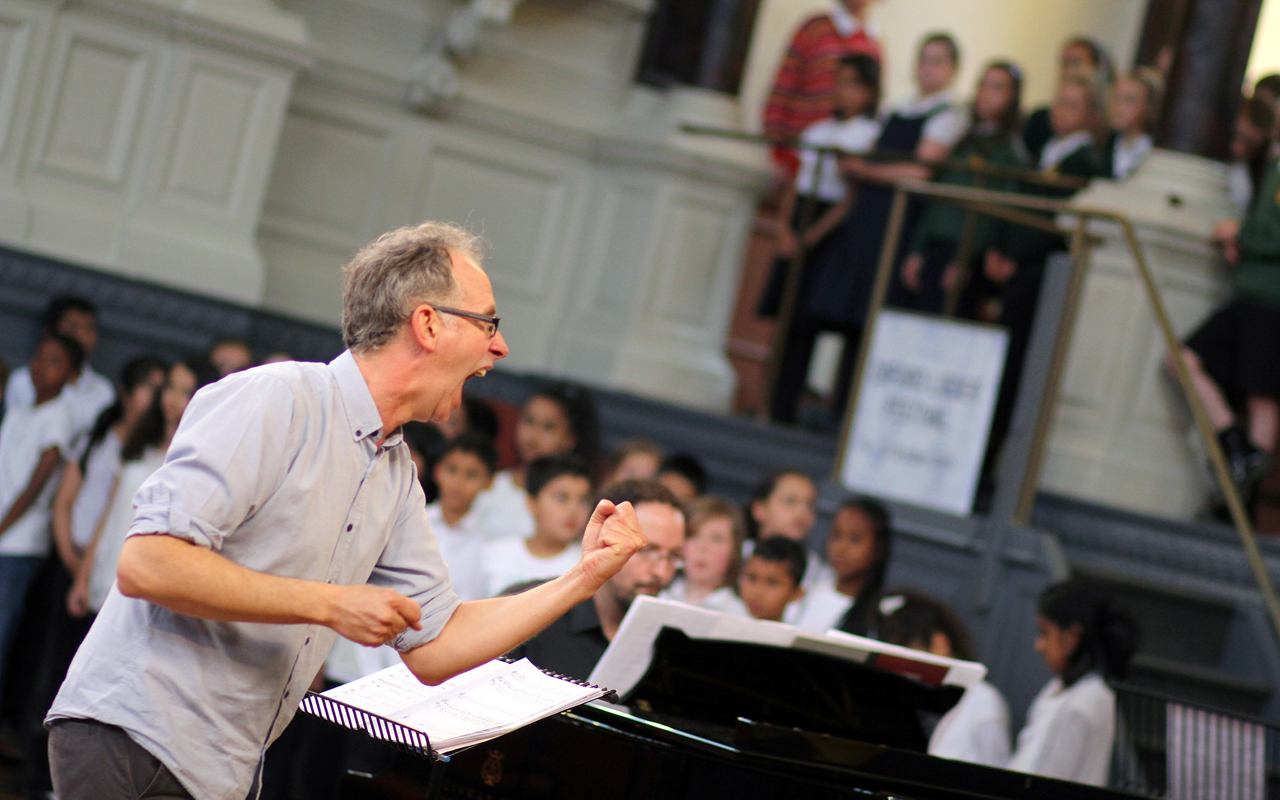 Making a point: Into the Light by composer John Webb

Nigel Clarke was the third shortlisted composer in the category for ‘A Richer Dust’, commissioned for Middle Tennessee State University and premiered in the UK by the Band of the Irish Guards.

A work for brass band was also shortlisted in the category of ‘Music for Community or Educational Projects’ (won by 'Into the Light' by John Webb).  Lucy Pankhurst’s ‘Brass Roots: Musical Wings’ was written for Macclesfield Youth Brass Band, incorporating rhythmic, melodic and structural ideas generated by the young people themselves, making it as much about compositional skills as performance. 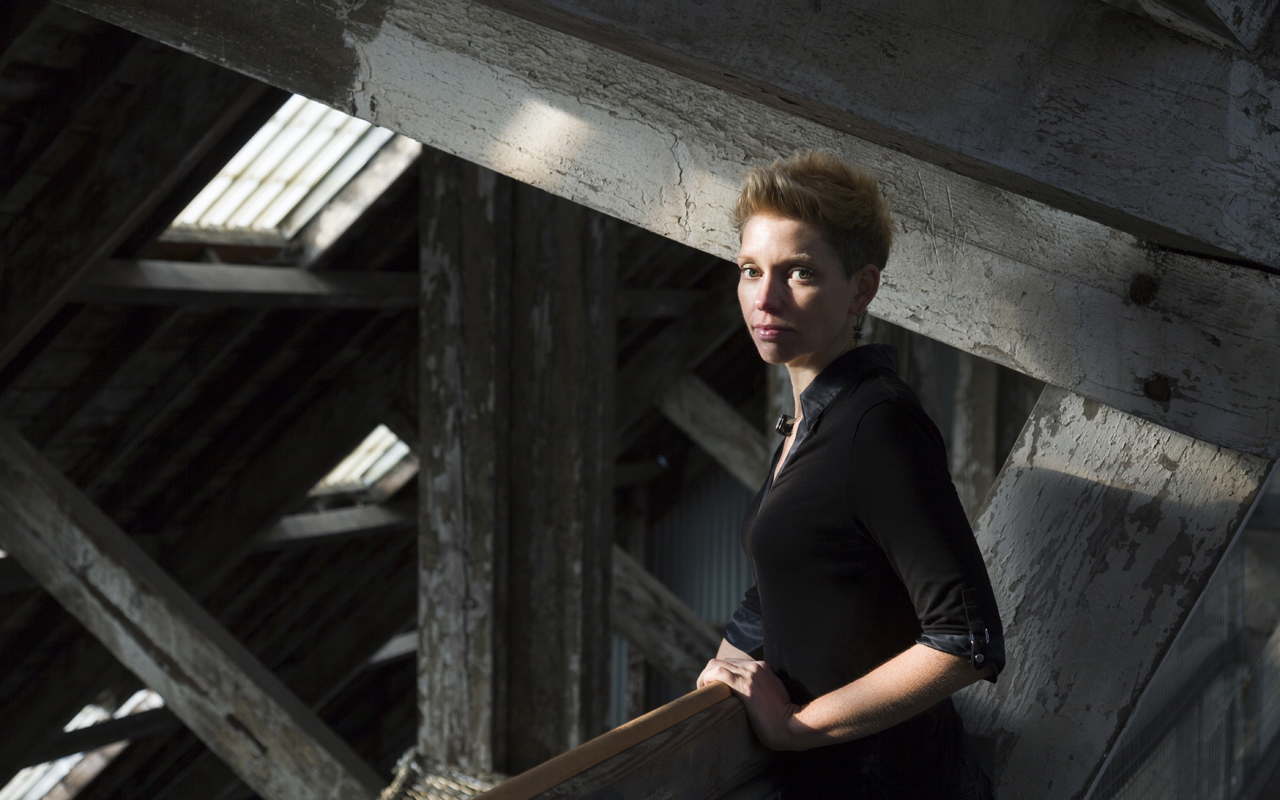 A composer to seek out: Tansy Davies who won the Stage Works category

Meanwhile, composers whose names have become familiar in the brass band context were also on the shortlists of other categories; most notably James MacMillan (in the Choral category) and Harrison Birtwistle for his opera ‘The Cure’.

‘Music for Amateur or Young Performers’ saw John Pickard’s ‘In Sea-Cold Lyonesse’, which was innovative in its use of technology to unite far-flung communities.  It was written for the Online Orchestra whose ambition is to create a new culture of on-line performance, opening up opportunities to musicians living in remote locations around the UK, giving people the opportunity to make music together with anyone with a broadband connection, anywhere in the world.

The winner was Jonathan Dove for his community piece ‘The Monster and the Maze’ (below).  Dove follows very much in the footsteps of Benjamin Britten in writing music of quality and challenge which is performable by young people and by amateurs working alongside professionals at the highest level.

Premiered in 2015, it demonstrates that musicians are truly ‘citizens of the world’. Earlier in the evening one of the speakers had pointed out that the music of Elgar, Holst, Vaughan Williams and Britten would have been unthinkable without the influence of composers from the rest of Europe and beyond. 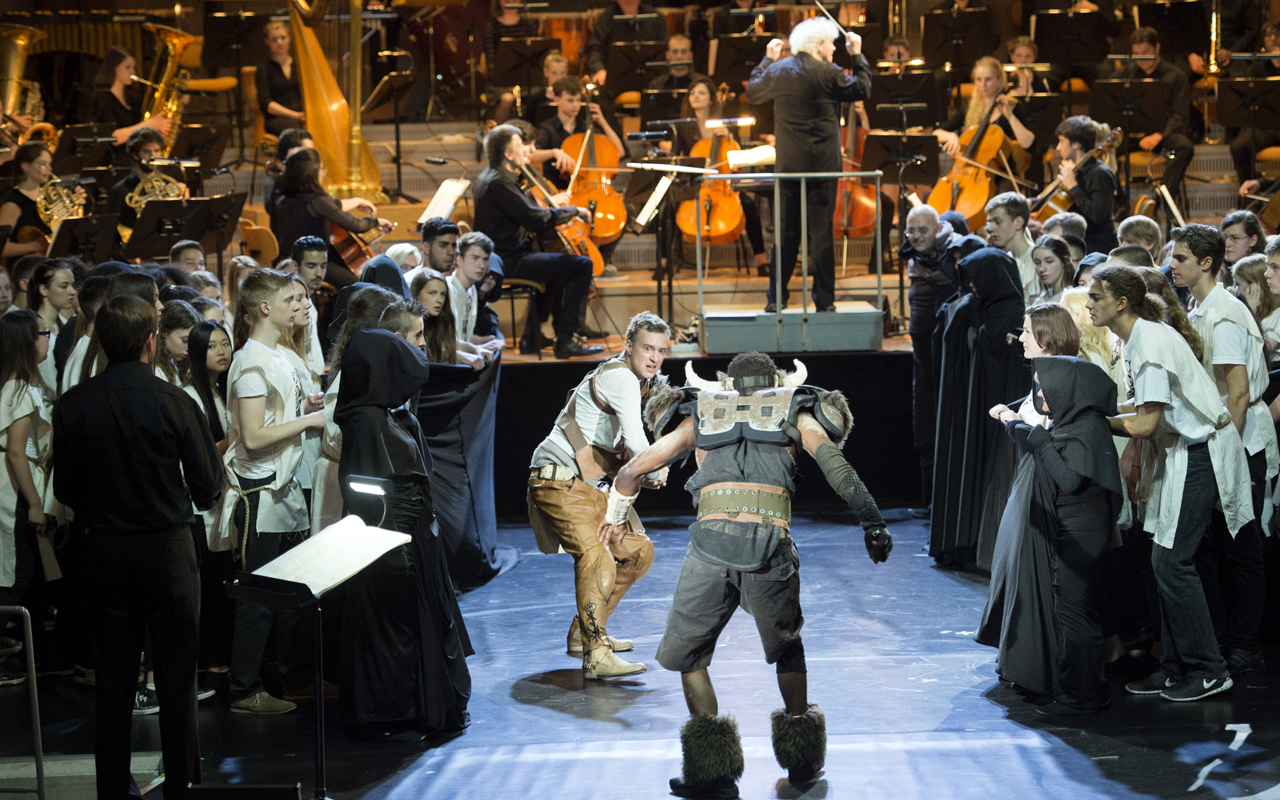 ‘The Monster in the Maze’ received three premieres all conducted by Sir Simon Rattle; in German in Berlin with the Berlin Philharmonic and local young people and amateur forces; in English in London with the London Symphony Orchestra and groups from the LSO Discovery outreach programmes; and in French at the Aix-en-Provence Festival the LSO, young people from the Aix-Marseille area, and players from the Mediterranean Youth Orchestra.

The Mediterranean Youth Orchestra meets in Aix every summer under the auspices of the Provence-Alpes-Cote d’Azur region and it draws its players from many countries bordering the Mediterranean, including North Africa, Israel, Palestine, Turkey, Greece and the Balkans.  Like Daniel Barenboim’s East-West Divan Orchestra it sees its purpose as breaking down barriers between nations and cultures which have all too often resulted in conflict.

Extending its global reach even further The Monster in the Maze is now due to receive a fourth premiere in Taiwan, with the text in Chinese.

Unites us not divides us

In his brief speech, Guy Fletcher, from sponsors PRS for Music, reminded the audience of music’s dual purpose both to entertain and inspire.

And at a time when we seem to be wondering what our values are, Tristram Hunt went so far as to suggest that the innovative, diverse and inclusive nature of the range of work on show at the Awards represented one way of forging a new British identity fit for purpose.

Reflecting the emblematic words of the murdered MP Jo Cox; music really can proclaim that what unites us is far more important than what divides us.