In the first of a new series meeting professional players in the Corps of Army Music, we find out more about Welsh Guards Band euphonium player Lance Sergeant Johnny Sproule. 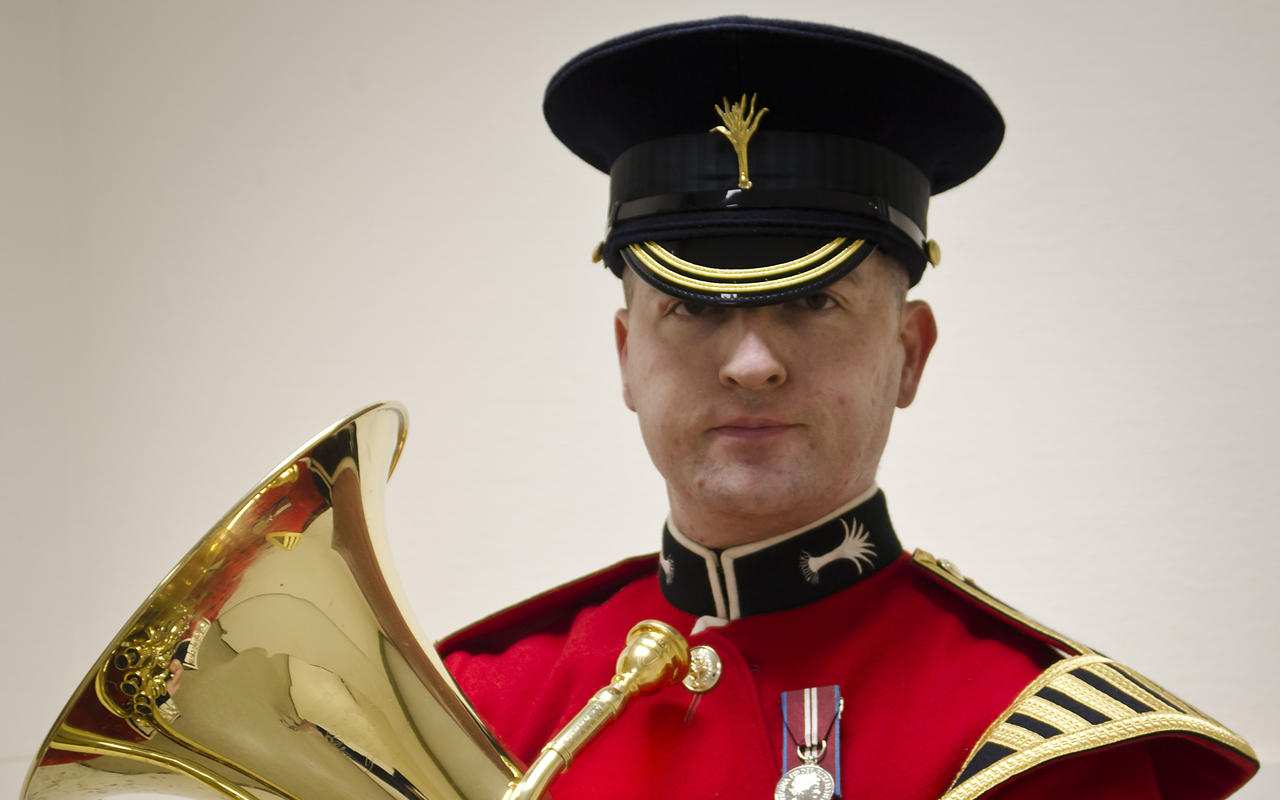 1. Tell us a little about yourself and your musical background?

Oddly enough I’m the only musical person in my family.  I actually started off on trumpet in secondary school and the reason was because my friend was learning it at the time and it seemed like the natural thing to do.

I had lessons from a great peripatetic teacher from the Belfast School of Music. She played in the 55th Old Boys Band at the time and was a brilliant inspiration.

My friend and I then joined a local brass band and received lessons from their principal cornet in a dark, smoky social club that resembled something out of ‘Phoenix Nights’.  I learned a lot though and managed to eventually move up to principal cornet.

Much later I moved to another band and took up the baritone. It was quite a change - especially as I found that I needed another lung! The cornet technique was very helpful though.

2. What made you decide to look into a career as a musician in the Corps of Army Music?

The Royal Irish Regiment Band gave a concert at my school and I sat in and played.

I really enjoyed the experience and so I decided to join the Reserve Band.  This was great as it meant I could continue school work and attend rehearsals when I could.  It gave me a good insight into military banding and the flexibility they encourage. I think a lot of people would be surprised.

I liked the idea of playing the euphonium professionally and the job security that the Army offered, so when the time was right it was an easy decision to make the leap across the water to join the regular Army and do it full time.

3. Tell us a little about the training levels or the musical standards you had to achieve to get accepted into the Welsh Guards.

Coming from a brass band background, I needed to learn bass clef, as military bands only use this.

I was initially put off by the thought of it, but soon found that it really isn’t that hard to master.  As far as standards go; no formal qualifications are needed, although you ideally need to be playing at around Grade 8 level.

It's all about potential though, and if you pass the audition you will have a fantastic opportunity to have lessons at The Royal Military School of Music under some of the finest musicians in the business.

The Welsh Guards Band take part in a number of very high profile engagements and rehearsal time is quite limited, so I'd say that your sight-reading skills definitely need to be decent.

4. What have been some of the highlights that you have experienced playing in the band in the last couple of years?

Without doubt it was performing at the annual Remembrance Ceremony at the Cenotaph in London.

Whilst it's a sombre occasion it's also very humbling to be a part of.  It really does make the hairs stand on the back of your neck.  I remember hearing other musicians tell me this, but it's only when you experience it for yourself that you get that feeling.

Another highlight would be performing at the Royal Edinburgh Military Tattoo.  The city hosts the Fringe Festival at this time so the place comes alive - especially at night! 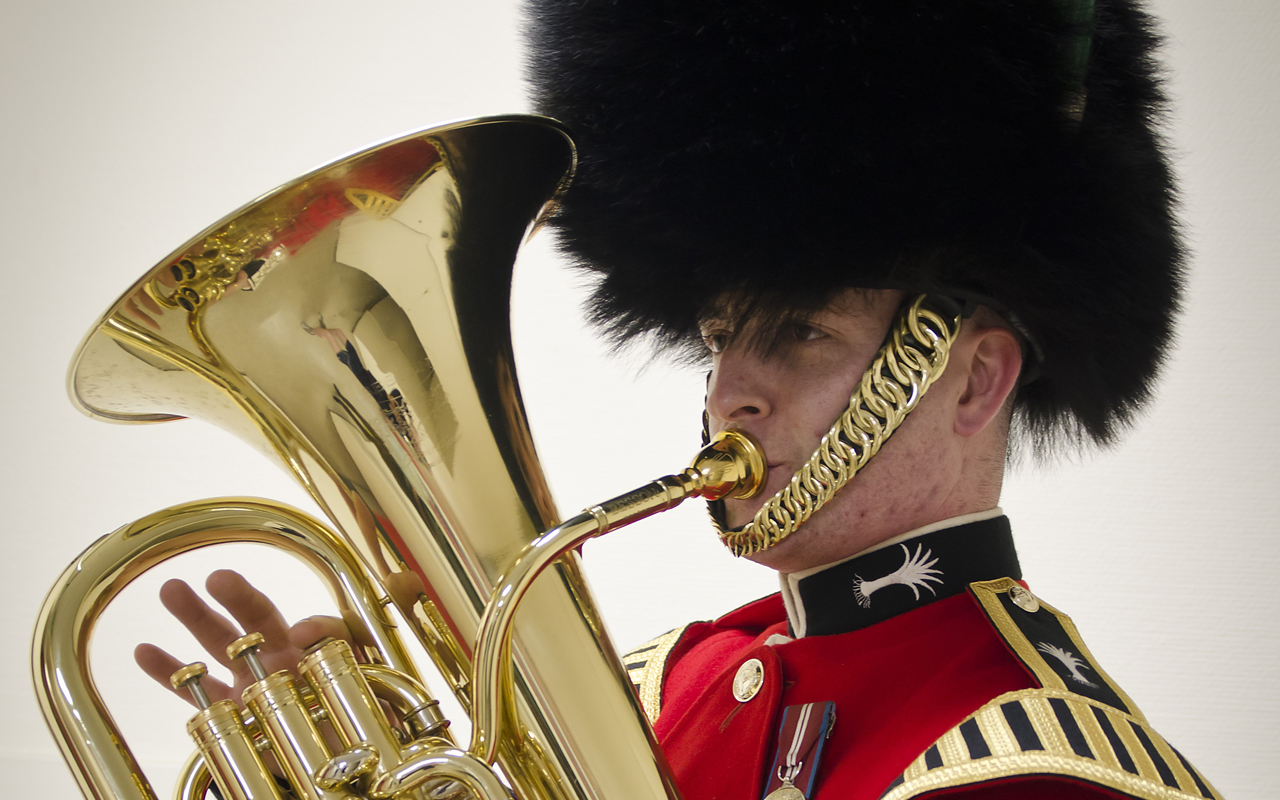 5. Has your decision to join as a musician lived up to your expectations?

Yes - and more. At the time I joined there were the glossy Army television adverts that showed the opportunities you could get to travel around the world.

It was true. I can safely say that I've travelled all over the globe and it's only when you chat to civilian friends that you realise just how much you've done.  I've performed solos in some great venues and met plenty of fantastic people along the way.

I've developed in so many ways, not just as a musician, and I wouldn't have gained that experience if I hadn't joined up.

6. What opportunities are available to you to improve as a musician and to seek career development?

If you fancy going further with your music there are a number of funding options to help. You can do diplomas that the Army will help fund the majority of it, but also university courses if you can.

Some of my colleagues have studied at the University of Salford and also in London, and had quite a lot of their fees paid.  You are expected to make a contribution of course, but when you think about it, if you weren't in the Army you'd be expected to fund the entire amount.

There are also opportunities to become a Bandmaster and a Director of Music.  If that doesn't suit you there are plenty of other roles too. The number of doors that can be opened is mind boggling.

7. What types and genres of music to do you play on a day to day basis?

This can vary quite a lot. This might be hard to comprehend coming from a euphonium player, but sometimes I find myself playing swing music and light jazz and then going straight to a performance of classical overtures or a solo. It’s a very eclectic mix - I love it.

8. What is a typical day (if there is one) like for you as a musician?

It’s very hard to define a typical day - as no two are ever really the same. It really depends on what we have coming up.

If we have a concert we have rehearsals along with sectionals and individual practice time.  It can be very intense or very relaxed.

You can also expect to have some personal fitness programmed into the day, and if we are on ceremonial duties we also have to make sure our uniforms are maintained to a high standard. It’s all about being very professional. 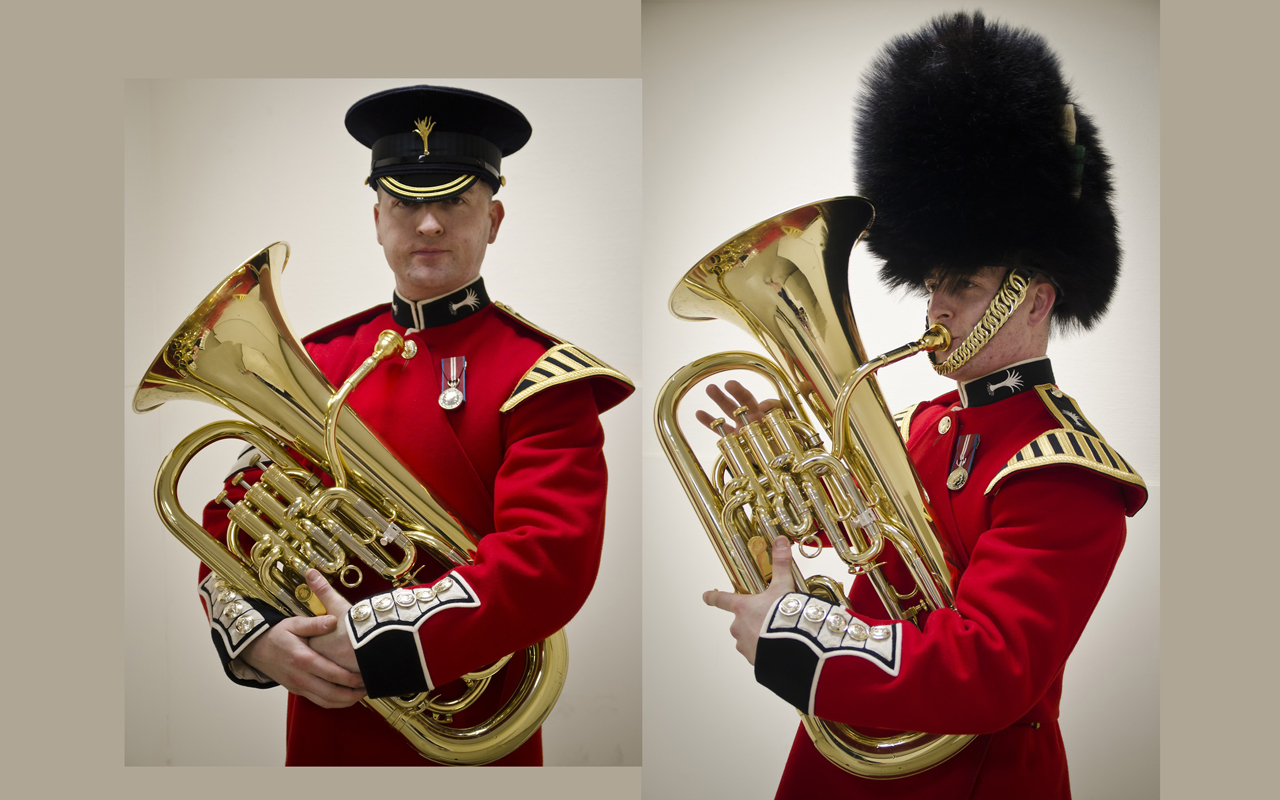 9. What does the immediate future hold for you and as a member of the band?

I’ve decided that I would like to become a Bandmaster and I've been preparing for the selection course which takes place in January 2017. The opportunities are there if you want to grab them.

10. What three tips would you give a young player to help them develop as a performer?

I could say practice, practice and then practice - but that would be a little unfair.

Good practice with a purpose is the key. Do not let the rehearsals be the time for practice.

Determination:  It can be very difficult at times to want to practice or to find time, but I always try to remain determined to do it - even if it’s with a practice mute somewhere unusual. I’ve had a few odd looks from people over the years!

Finally - inspiration. There's always somebody better than you out there and that's why I think it's so important to seek them out and learn from them. There are so many brilliant brass players around it will never be hard to get inspired.

To find out more about a career in the Corps of Army Music go to:
https://www.army.mod.uk/rolefinder/role/145/musician?campaigncode=n15x01100b&c3ch=internal-referral&c3nid=tumblr-tlg