4BR Editor Iwan Fox talks to Prof Nicholas Childs of Black Dyke as he looks back on becoming the most successful Championship Section winning conductor in Regional Championship history. 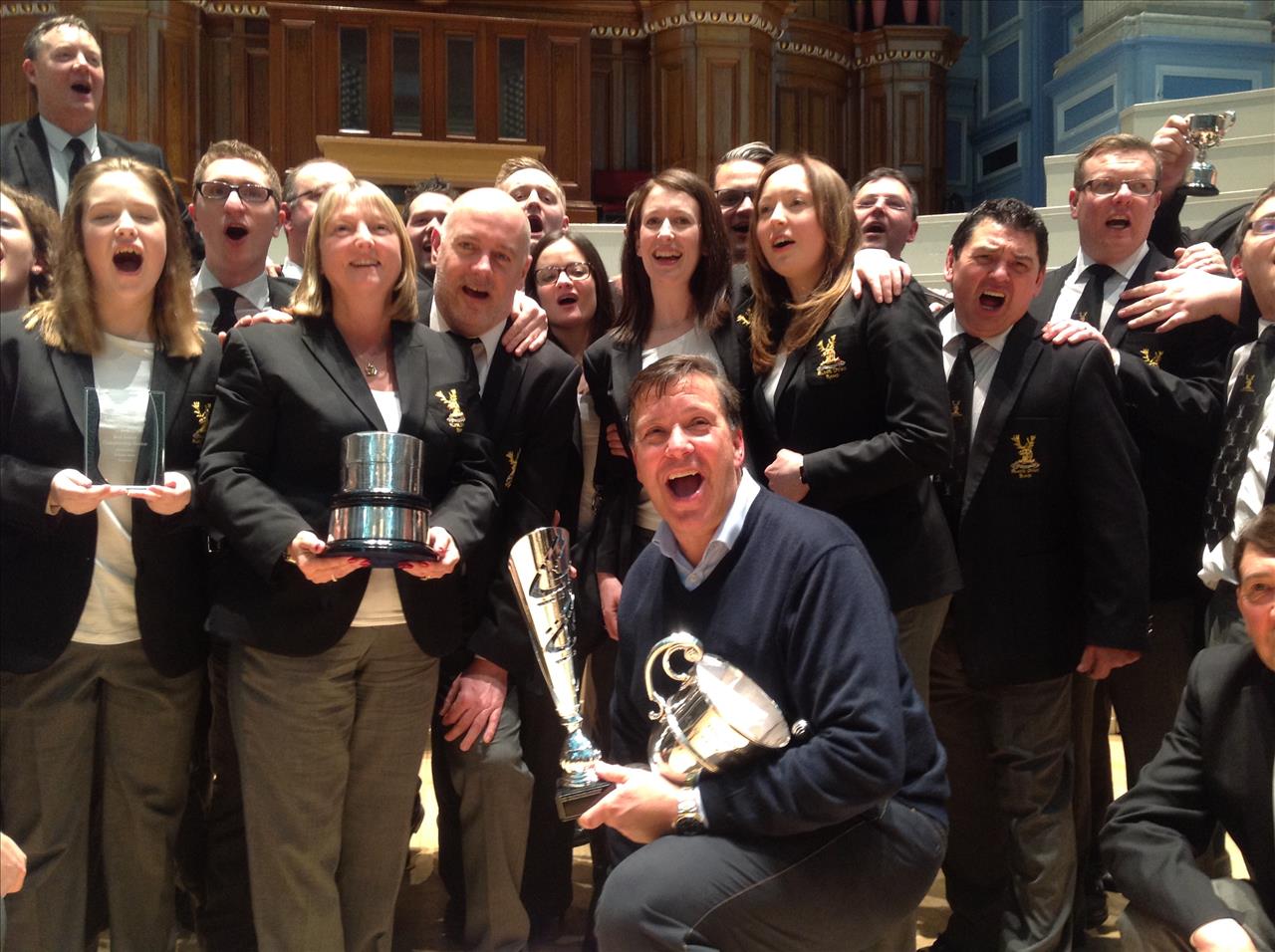 Even more to come: The Black Dyke MD is determined to add even more titles to his record of 31

Record breaking statistics can only tell half a story.

When Prof Nicholas Childs led Whitburn Band to victory on Herbert Howell’s ‘Pageantry’ at the Scottish Championships in Perth, he became the most successful top section conductor in Regional Championship history.

31 titles from nine different bands at six different Areas: It is a record that will undoubtedly last a generation or more - especially as the Black Dyke Director of Music is determined to extend it even further.

It was perhaps fitting that it came with a band that was once also directed by the former record holder - the great Black Dyke conductor, Major Peter Parkes. His eight Scottish titles with Whitburn formed part of a personal haul that started in 1980 and ended in 2003, and which in 1987 had seen him beat the then record held jointly by two other leviathans of the banding world – Harry Mortimer and Walter Hargreaves, each of whom notched up 16 wins.

Few people would have thought his eventual record of 30 titles in 23 years would ever be beaten. At the time of his last success with Desford Colliery Band, Prof Nicholas Childs had a mere 13 victories to his name.

Records, however imposing, are always broken though - and even the Bob Beamon-like leap into the regional stratosphere by ‘The Major’ was finally overtaken4BR

Records, however imposing, are always broken though - and even the Bob Beamon-like leap into the regional stratosphere by ‘The Major’ was finally overtaken, when, in a sustained period of emphatic title winning excellence from 2014 onwards, Prof Childs claimed seven titles in nine contest outings.

The 29th Area victory with Foden’s this year at Blackpool put him within touching distance. A week later in Huddersfield he equaled it with Black Dyke - his sixth Area win with the Queensbury band. The record finally fell at Perth Concert Hall. 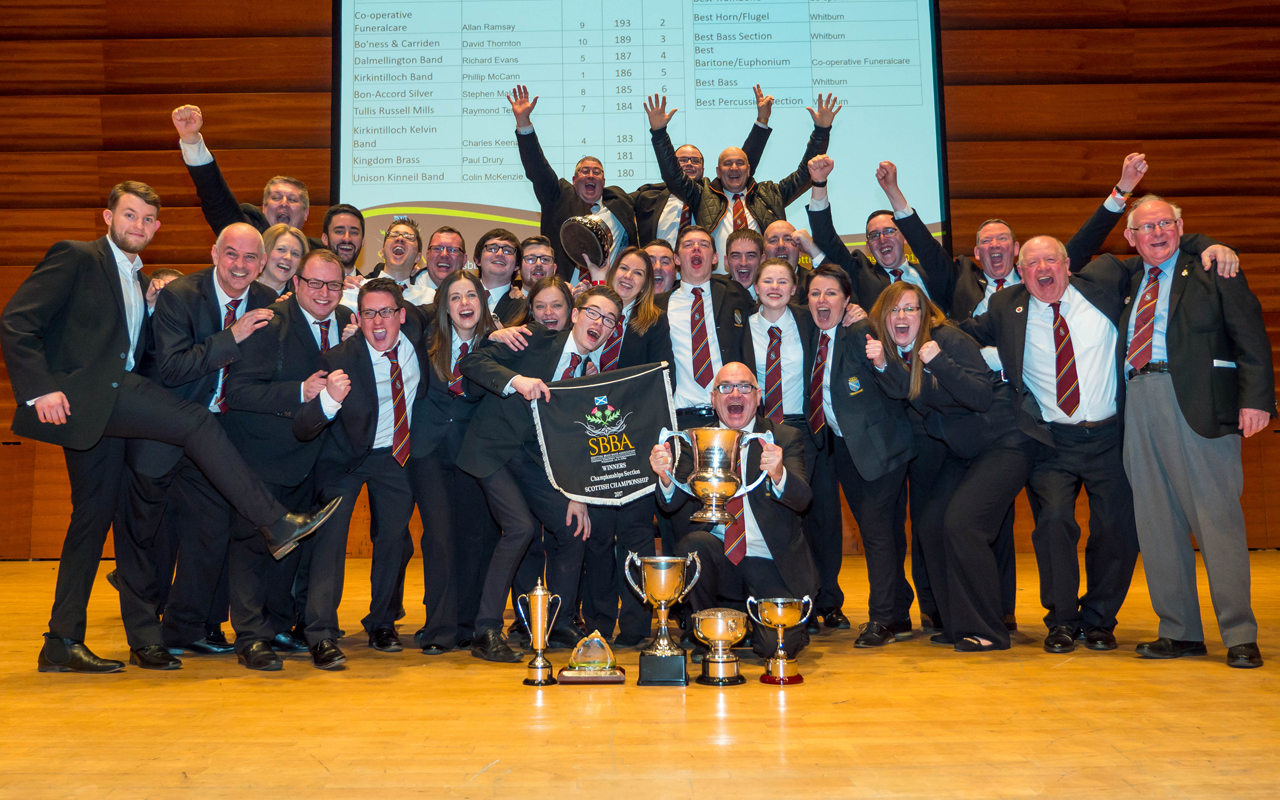 Now he stands alone. And with not the slightest inkling of his appetite being sated, the new figure could well reach 50 or more by the time the Welshman finally hangs up his baton.

However, speaking about the achievement to 4BR recently, he spoke of others not himself. “Each victory was down to the bands and the players”, he said. “I’ve always felt myself privileged to be asked to conduct on the contest stage. They place their musical faith in me - so any success reflects that belief.  It’s not my victory but theirs - always theirs.”

His reaction to the record also told you a great deal about a conductor who knows that it has come through a great deal of hard personal work. Hidden in those records are the names of bands, that although not as famous as Black Dyke, also have their tales to tell of how their Area victories came about. 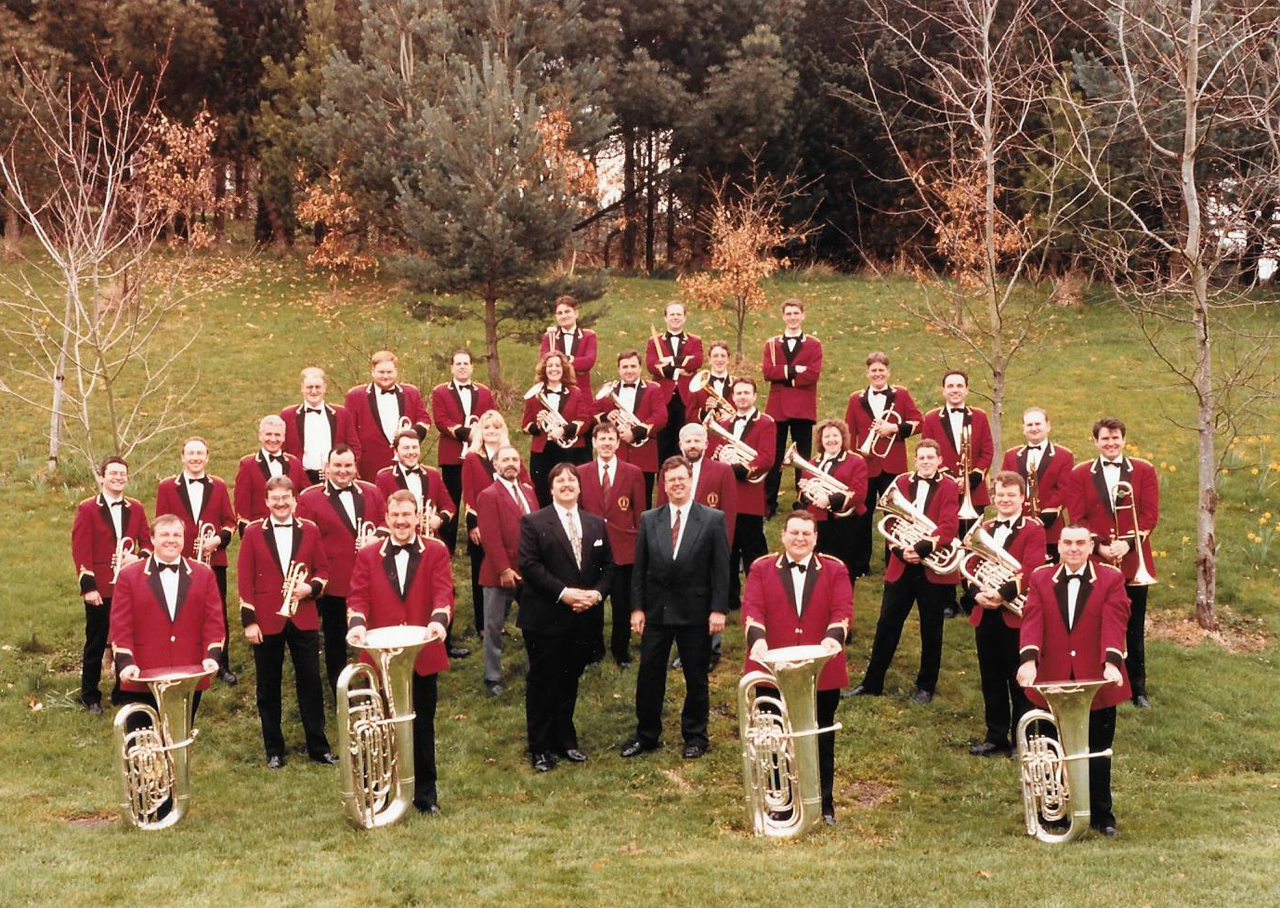 The first Championship success came with Tredegar in 1995

“Some of the early successes meant a great deal - like those at Tredegar,” he said as he reflected on the other half of the statistical story.

“They came with my father’s old band (and in a neat twist of fate, the record was broken by him using his old score of ‘Pageantry’ to study from), so that connection will always make them special. Then there were the journeys down to Bodmin and Mount Charles in Cornwall and more latterly at Woodfalls - great trips to meet up with genuine, hard working bandsmen and women - all so enthusiastic and determined to succeed.”

However, the most important regional contest outing was perhaps his first.

That came when he took Rochdale Band in the North West Championship Section in 1989. It ended in a sixth place finish, and saw him up against some pretty formidable conducting opposition with the likes of Howard Snell, Richard Evans and Roy Newsome.

That opened my eyes to what top section conducting was all about. From then on I knew determination wasn’t enoughProf Nicholas Childs

“That opened my eyes to what top section conducting was all about. From then on I knew determination wasn’t enough: So I took lessons and learnt from as many people as I could. Being conducted by Howard Snell at Foden’s and working with the likes of Roy Newsome and especially Elgar Howarth made a huge difference.

It was meeting Alison (his future wife) at Rochdale that was the hidden extra ingredient though. Without her love and support I don’t think I would have succeeded. Each success from that time on has been a real team effort together.” 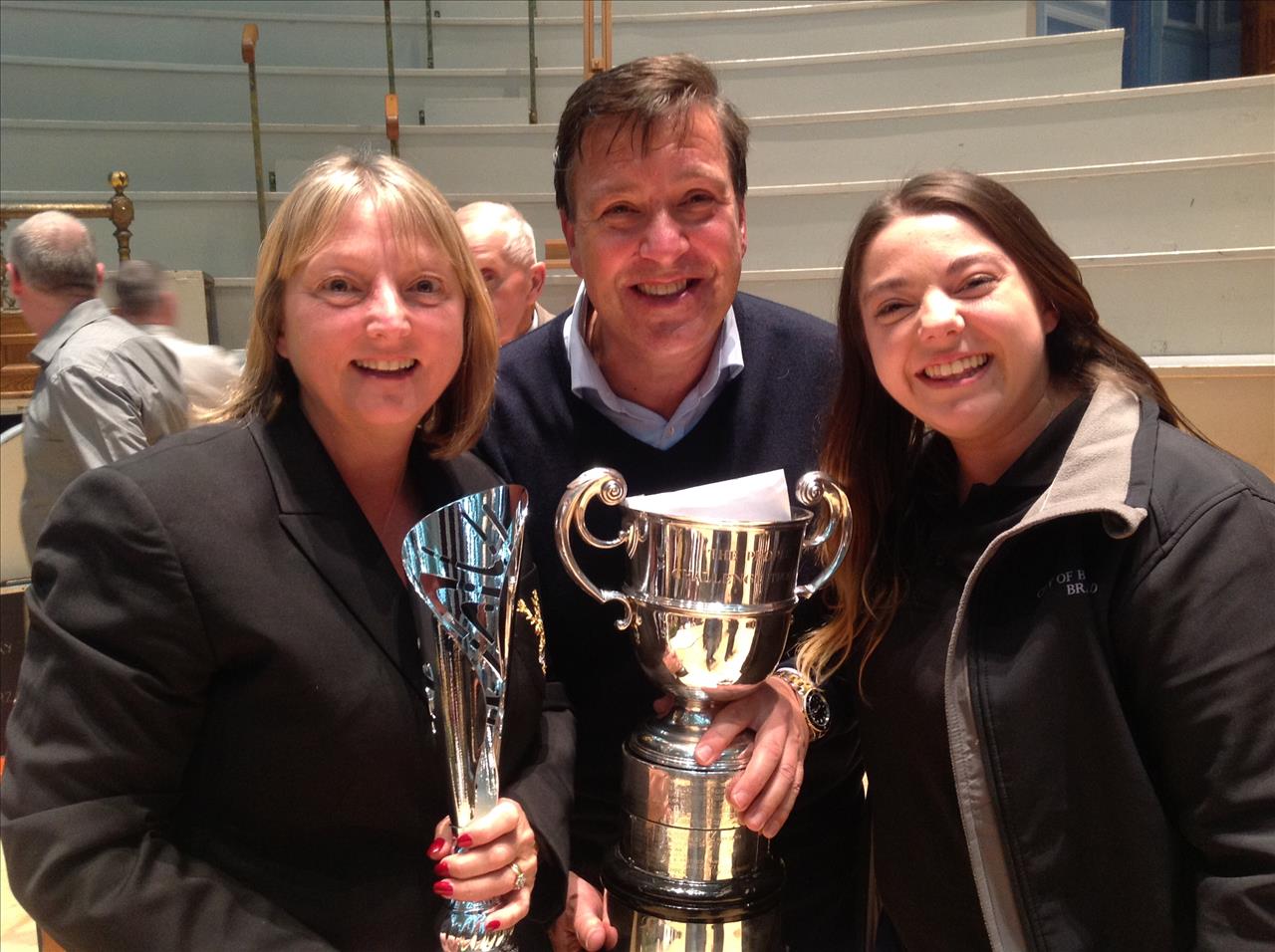 The importance of family: The foundation of support comes from wife Alison and daughter Rebecca

Following the Welsh Regional wins in 1995 and 1996 with Tredegar he quickly became an MD in demand, and in 1997 he conducted at five different events. However, by 1998 he had become MD at Foden’s and immediately led them to their first Area success in five years - a feat he repeated the following two years to help claim their first ever hat-trick of Regional titles.

“They were such exciting times at the band - and it was only the lure of Black Dyke that could have taken me away,” he recalled. “We also won the National title in 1999 and celebrated the band’s centenary with another Area win before I left. I was delighted to be asked recently to return to lead them to two more North West titles.”

It’s great to work with other bands. It keeps me motivated and you can build lasting friendships and musical connections that benefit everyoneProf Nicholas Childs.

His Area conducting statistics with Foden’s are remarkable: Five contest outings, five wins.  Not far behind though come the six victories in 9 appearances with Co-operative Funeralcare in Scotland and six from 11 with Reg Vardy in the North of England.

“It’s great to work with other bands,” he says. “It keeps me motivated and you can build lasting friendships and musical connections that benefit everyone.

That was the case at Co-op and Reg Vardy, where two very good bands really pushed themselves forward as major championship contenders. Every time I went there they were so well prepared and focused on the job in hand.

A great deal of the success I’ve enjoyed over the years has come from the preparation work put in by some unsung conducting heroes. I’ve got a great deal to thank them for.” 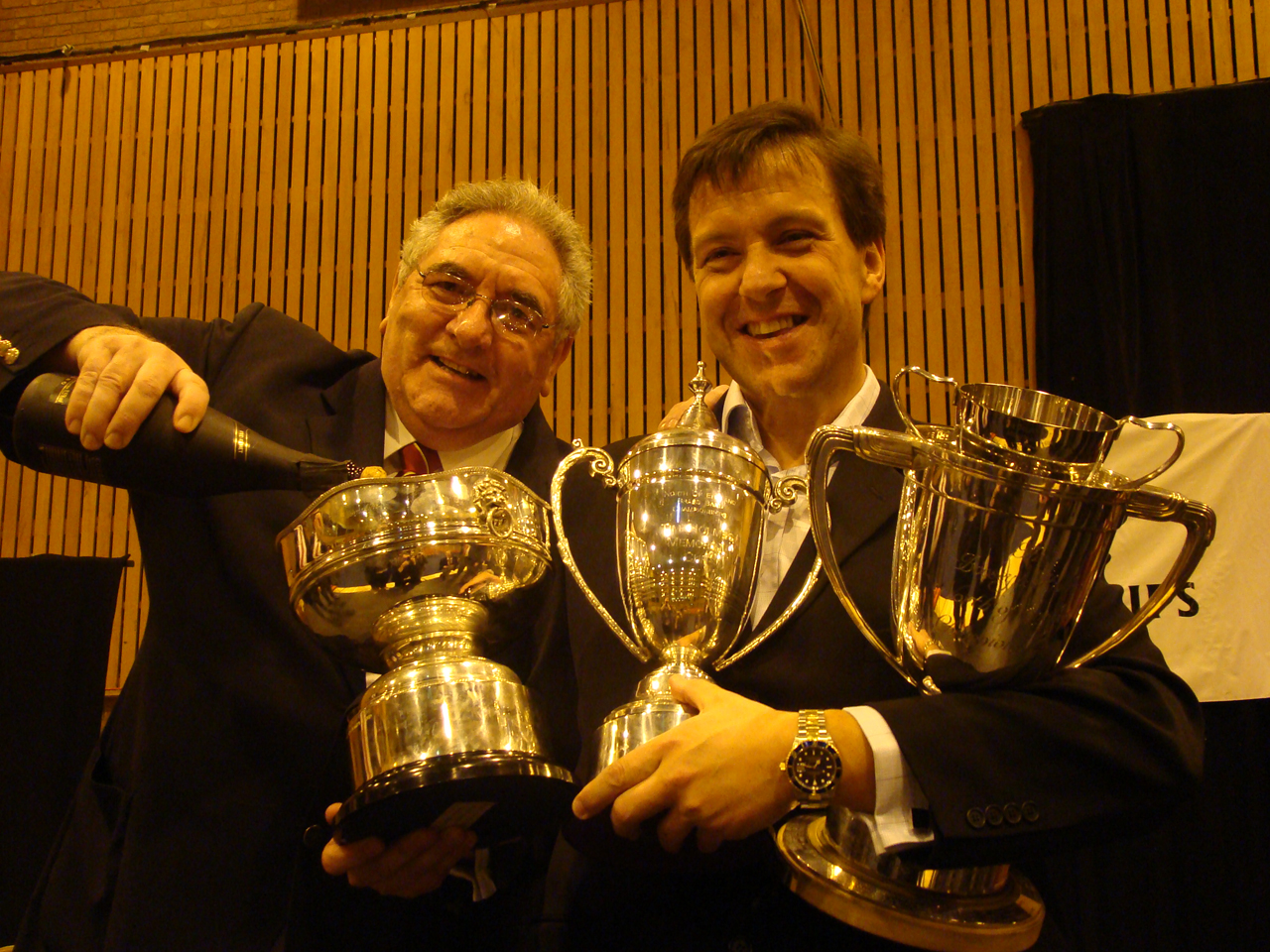 Statistics can also occasional reveal the occasional anomaly, and Prof Childs gives a wry smile when reminded of a few of them - such as his ‘first’ Area win, which was not in the Championship Section at all.

“I’ll always secretly add one more to the list,” he says with a laugh, after recalling taking EYMS Band to the North of England First Section title in 1995. “That was a great victory as it came with the band my brother formed. He had to play with Black Dyke at the Yorkshire Area, so I took them in the day.”

Not many people would also know that he also made an appearance in the Second Section with Markham & District in Wales in 1998 - “I was asked by a friend to step in and really enjoyed it despite the result!” - whilst he is one of a very small group of conductors with a ‘disqualification’ against his name with Black Dyke in 2015. ”One to forget there!” he says with a grin. 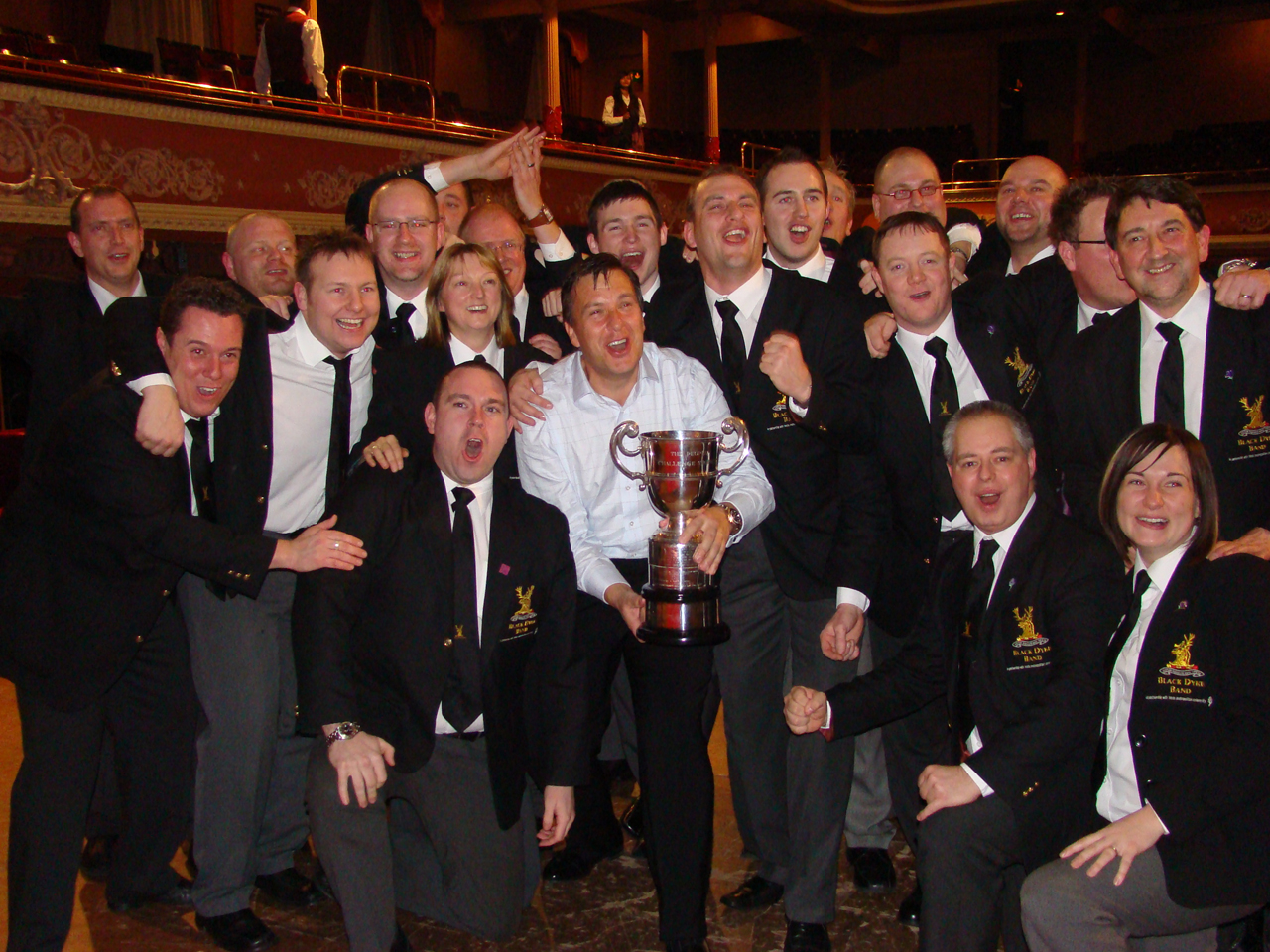 However, it has been that 18 year tenure at Black Dyke that has defined him as a conductor; one that has not only seen multiple European, National, British Open and English National titles successes, but six Yorkshire Regional titles victories - the first of which came at his first attempt in 2001.

“There was a great deal of pressure and expectation that day,” he recalled. “We had come second at the British Open a few months before, but we were undergoing major changes in the band.

That victory on ‘Jazz’ was as important as any we have since enjoyed at Black Dyke. It gave me the extra confidence to mould the band the way I wanted and to put in the foundations that we have since built 18 years of success on.” 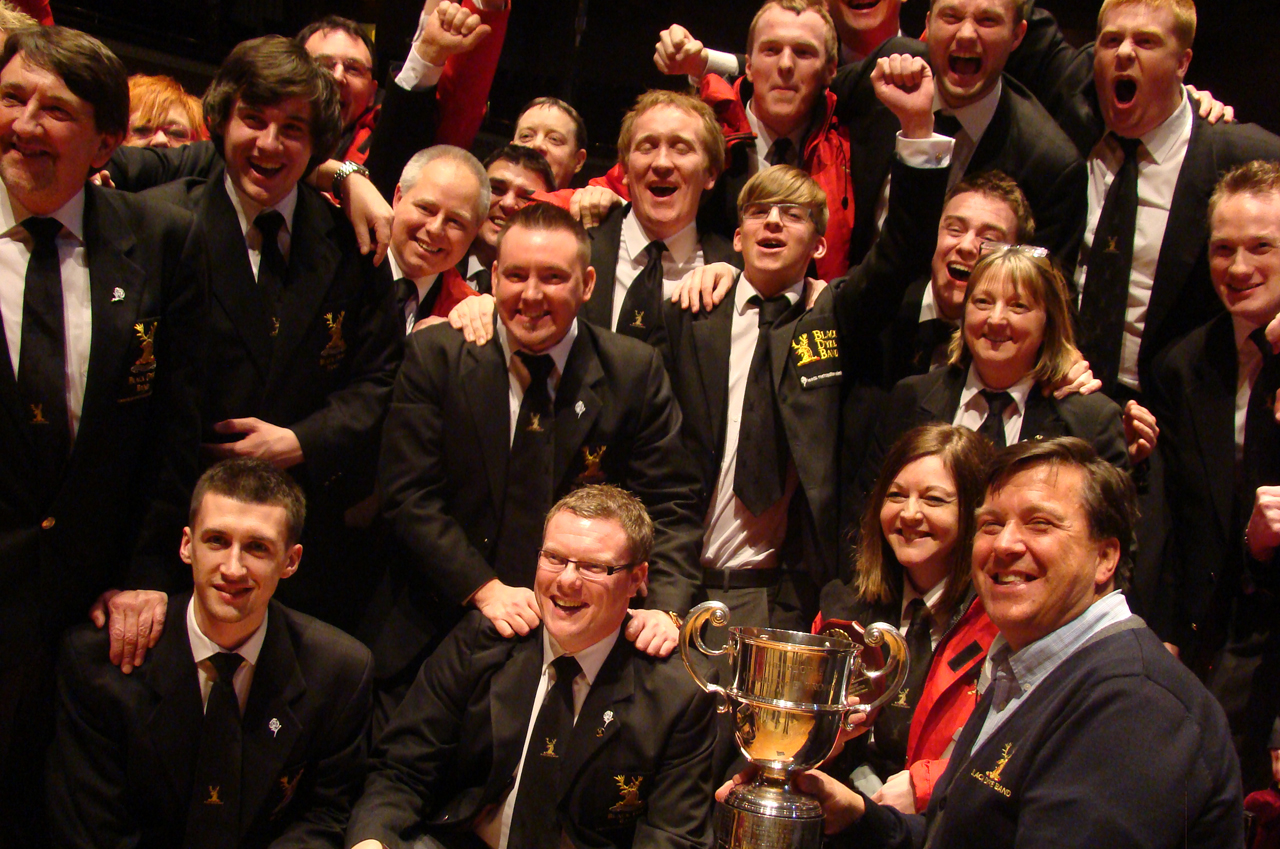 Same title different music: The band's 2012 success came on 'The Devil and the Deep Blue Sea'

“We haven’t been able to claim a hat-trick yet,” he says. “We missed out in 2003, and as it’s Yorkshire, it’s perhaps the most difficult Area contest to even win. Expectations are always high with Black Dyke, but each of those six victories have come through the sheer hard work and dedication of the players.  We are all determined to create a little piece of extra Black Dyke Area history though.”

Expectations are always high with Black Dyke, but each of those six victories have come through the sheer hard work and dedication of the playersProf Nicholas Childs

Now comes the opportunity to seal his own legacy (he is rapidly closing in on a remarkable century of contest wins) with a record that will perhaps take even longer to beat than the time it took him to overtake Major Peter Parkes.

Iwan Fox (with thanks to Gordon Simpson)