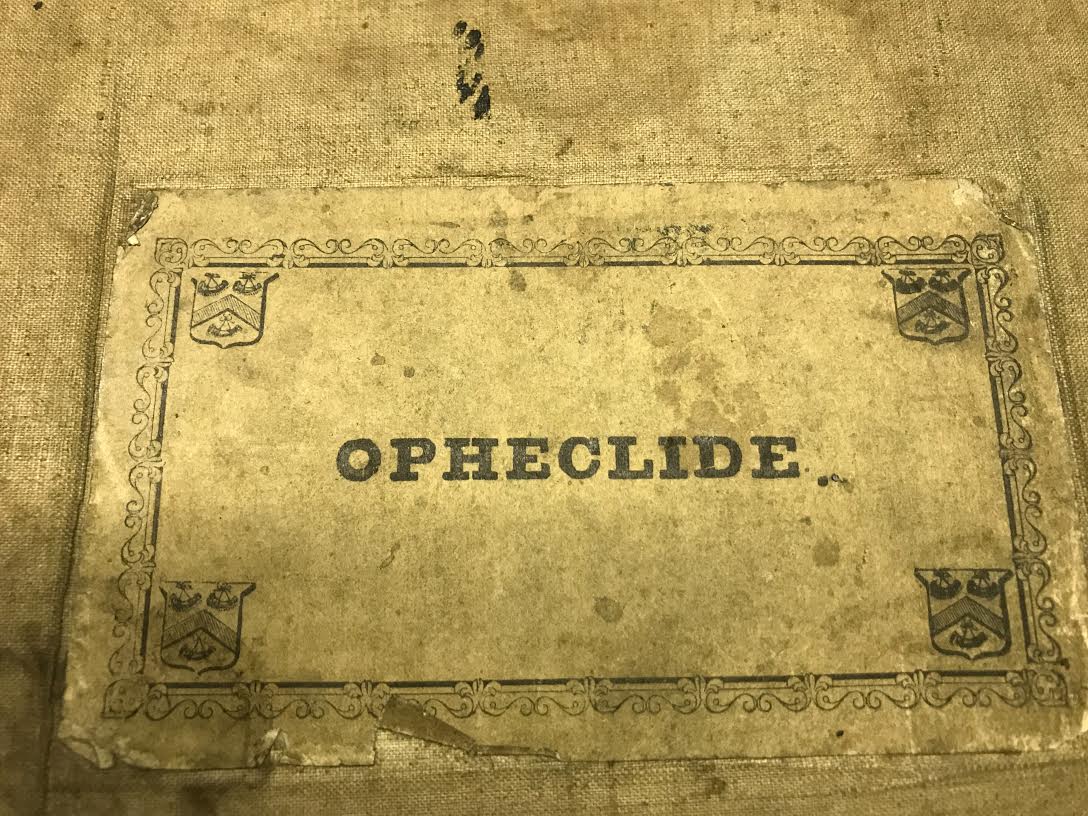 As if written on papyrus: One the 1855 Black Dyke part books of the John Foster & Son, Black Dyke Mills Band

On entering the darkened library room of Black Dyke Band you get just an inkling of the feeling the great archaeologist Howard Carter must have experienced on breaking the seal to Tutankhamen’s tomb.

As the heavy fireproof door swings open and the blinking overhead light flickers into life, your eyes focus on a repository of treasures the like of which no other brass band in the world can surely match. It may not contain a golden sarcophagus, but it is still packed from floor to ceiling with manuscripts and music that to banding historians are just as priceless.

On the bowed, groaning shelves lies 160 years of musical history - all in numerical hieroglyphic sequence, waiting to reveal their hidden secrets - 4BR

On the bowed, groaning shelves lies 160 years of musical history - all in numerical hieroglyphic sequence, waiting to reveal their hidden secrets.

It was not always like this - but due to the decision of Director of Music Prof Nicholas Childs to ensure the library wasn’t left to fall into terminal dusty decay, and aided by over 15 years of dedicated work by Black Dyke cornet player and official librarian Keith Britcliffe to catalogue and decipher, record, arrange and preserve over 5000 different items of music, it has become one of the Queensbury band’s greatest assets. 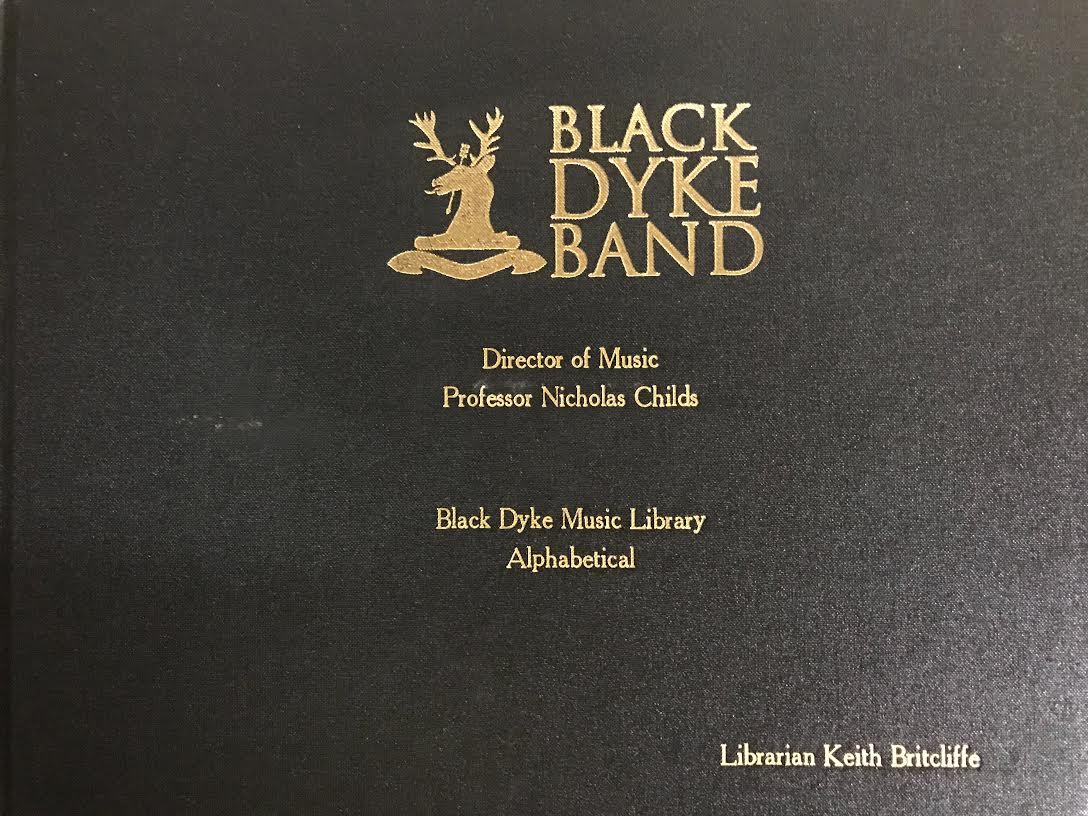 The book of musical assets: The new library book is still increasing in size

It is however, still a renovation work very much in progress - although one that has already benefitted greatly from the investment received from the band’s successful Heritage Lottery Fund (HLF) project.

That has started to make a vast collection of memorabilia and banding artefacts accessible to the world - including the long term undertaking to digitalise the huge collection of original compositions written for and performed by Black Dyke since its earliest days.

“This was one of the most import decisions I made when I first came to the band,” Prof Childs says. “So much music had been lost or misplaced, never returned when it was borrowed or simply thrown out.  The library was Black Dyke’s lifeblood, but we were in danger of it haemorrhaging away by simply not appreciating what we had.”

So much music had been lost or misplaced, never returned when it was borrowed or simply thrown out.  The library was Black Dyke’s lifeblood, but we were in danger of it haemorrhaging away by simply not appreciating what we had.

At first it was a question of recovery and resurrection, before the hard graft of re-organising and cataloguing could take place. It took months before the full extent of what was needed to properly preserve the library could realistically be addressed.

“We had to protect things before we started any other work, so we invested in fireproofing the library and then set about recovering works that had gone missing,” Prof Childs says. “So many people helped, but Keith Britcliffe has been the day to day key. The dedication he has put in has been staggering.”

“It’s become both a labour of love and a bit of an obsession,” Keith admits as he delves into a box to unearth one of the oldest musical relics - one of eight, bound ‘Part Books’ labelled ‘Black Dike Military Brass Band’. 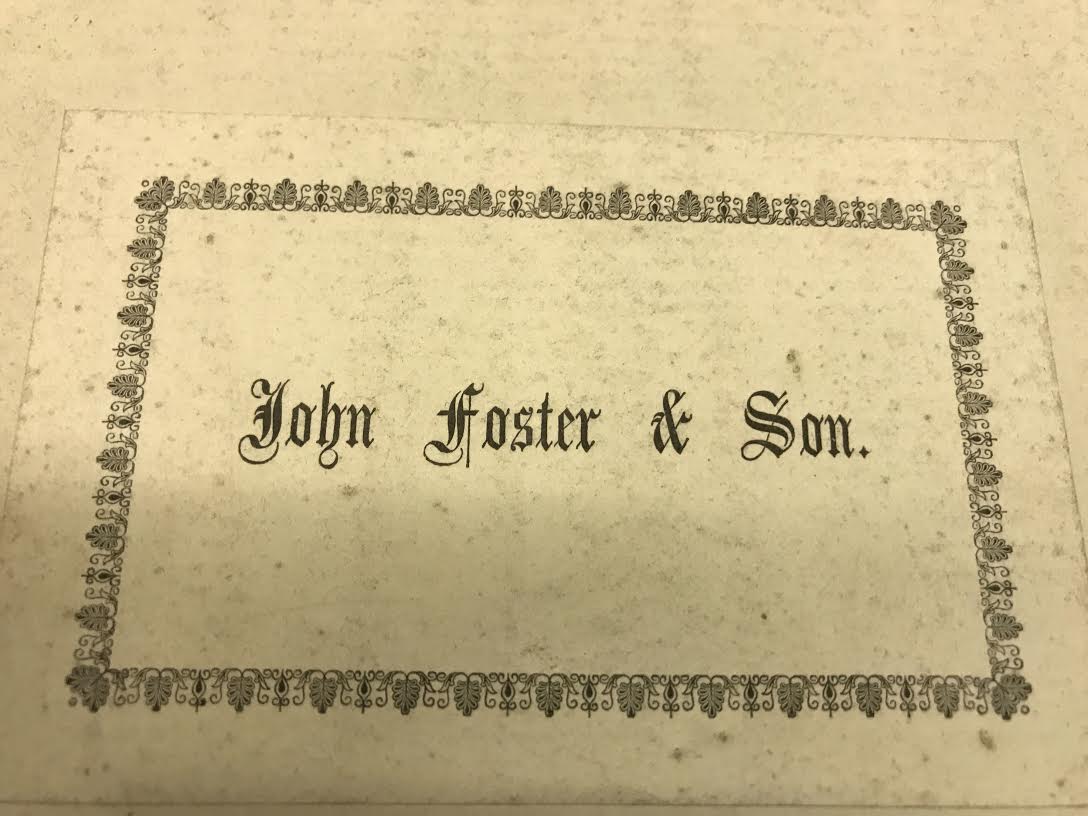 The maker's name says it all in banding history

Written for opheclide, its pages contain 42 original works; waltzes and polkas, quadrilles and gallops, overture excerpts and selections from composers such as Verdi, Donizetti and Bellini.

“This really is living history,” Keith explains. “This is music played by John Foster’s Black Dike (sic) in 1855 - the year of its formation. One of the pieces ‘Yorkshire Waltzes’ was used as a test-piece in Hull 1856, so this takes us back to the very beginnings of the band.”

It is also music that has been resurrected for modern performance, with 10 pieces recorded for the first of two special Heritage Lottery Fund CDs.

‘Gems from Queensbury: Volume 1 - Mighty Oaks’, will be available to visitors when the Black Dyke Heritage Centre is officially opened later this year. A second, ‘...Between Commentary to Tribute’, records original repertoire from 1870 onwards written or arranged by giants such as Edwin Swift, William Rimmer, John A Greenwood, Arthur O Pearce, George Willcocks and the truly remarkable J Weston Nicholls. 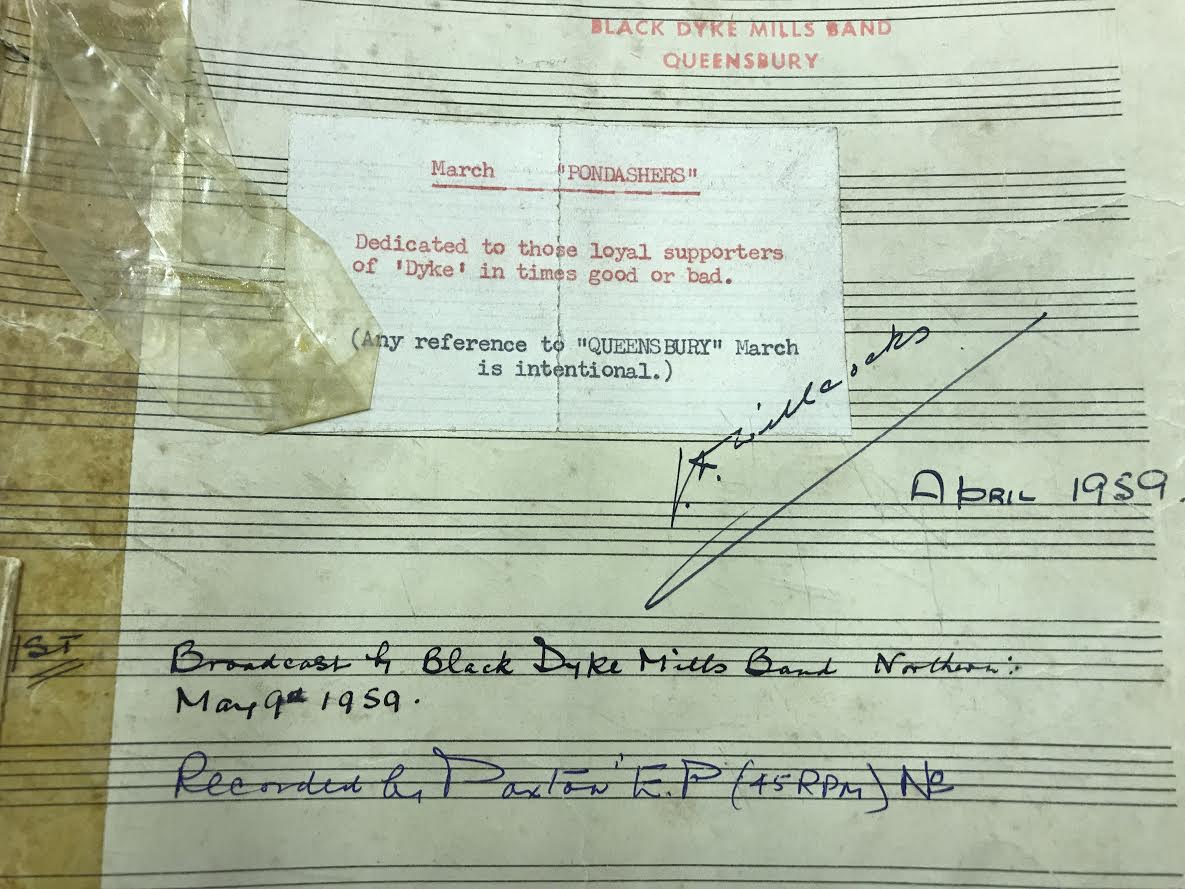 Dedicated to Pondashers all over the banding world

Prof Childs explains why he feels the Heritage project is of such importance. “It’s an enourmous task, but one that will have such a lasting legacy, not only for Black Dyke, but for the whole of banding movement.

By digistising and also recording some of the most important works to start we will be able to open up our musical history for others to enjoy for generations to come. The technology is now enabling us to do that, and with expert help from professional curators, it also has great academic resonance.”

It is tantalising to think what gems still await to be unearthed, but the project has already come up with some amazing finds from Black Dyke’s past.

They are in pristine condition - as if played yesterday, let alone over 140 years ago.

This is the music that was played by Black Dyke in securing their first ever British Open ‘hat-trick’ under the baton of Alexander Owen.  Beautifully printed on a large folio sheets it still retains the pencil marks of the players. It was still being played in concerts by the band 20 years after their success.

Even more significant though are the parts to the ‘Grand Selection from Gounod’s Opera - Cinq Mars’ – also ‘expressly arranged’ by Charles Godfrey for Belle Vue in 1881.

This is the music that was played by Black Dyke in securing their first ever British Open ‘hat-trick’ under the baton of Alexander Owen.  Beautifully printed on a large folio sheets it still retains the pencil marks of the players. It was still being played in concerts by the band 20 years after their success. 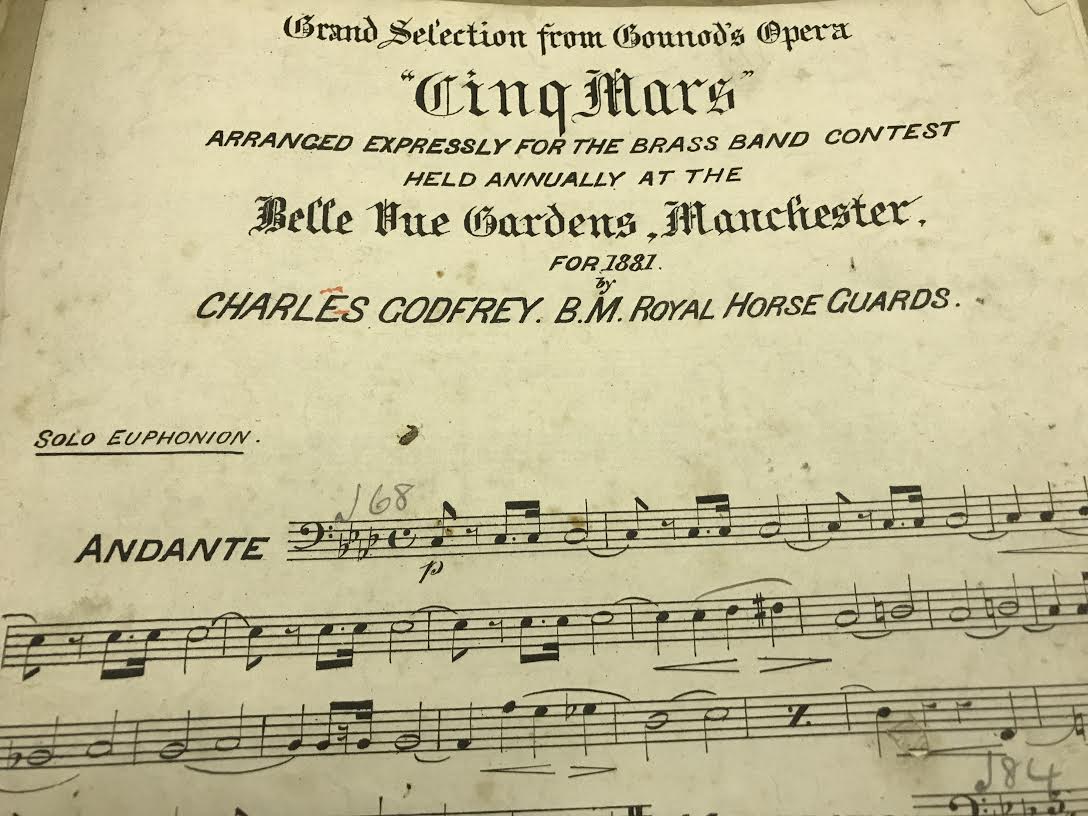 No less significant you feel is a faded conductor’s part of the ‘Suite from Hiawatha’, written in the elegant hand of William Halliwell - perhaps as his own homage, or even as a better version of the piece on which the band claimed its first ‘Double’ in 1902, whilst fast forward through the decades and the box files reveal another side to the legendary contest successes.

Just as evocative (as well as slightly whimsical and even a little bit rude at times) are the parts of individual players who made those memorable victories and performances possible.

Just as evocative (as well as slightly whimsical and even a little bit rude at times) are the parts of individual players who made those memorable victories and performances possible.

The front page of the score to ‘Benvenuto Cellini’ - the work on which they won the 1970 World Championship title, is covered with reminders and directions – possibly from Geoffrey Brand himself, whilst a slightly yellowing repiano part bears the notation; ‘D W Horsfield - London 1970 - First Prize’; a touching reminder of the popular former player, adjudicator and Kirklees Printer David Horsfield who died in 2016. 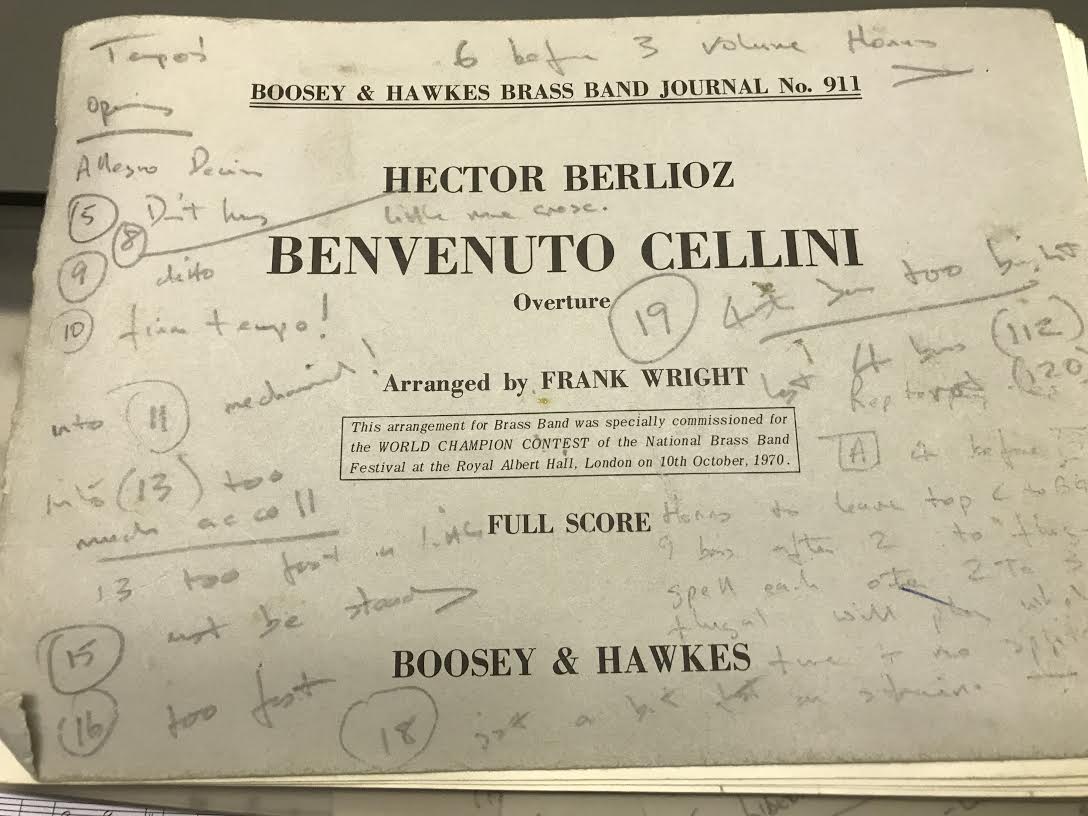 How to become a World Champion...

Then there is the simple ‘Jim’s Part’ which adorns the solo cornet part of ‘Pandora’ - the one that the great Jim Shepherd would have played off when making his iconic recording as principal cornet on the celebrated ‘High Peak’ album in 1970.

You can also take a guess at who were the solo cornet duo of ‘Batman & Robin’ on the band’s first European success in 1978 on Morley Calvert’s ‘Introduction, Elegy and Caprice’ (Messers McCann and Ken MacDonald apparently), or just how many legends have played off the original copies of the march ‘Queensbury’ which are now safely stored away as fragile as Egyptian papyrus. 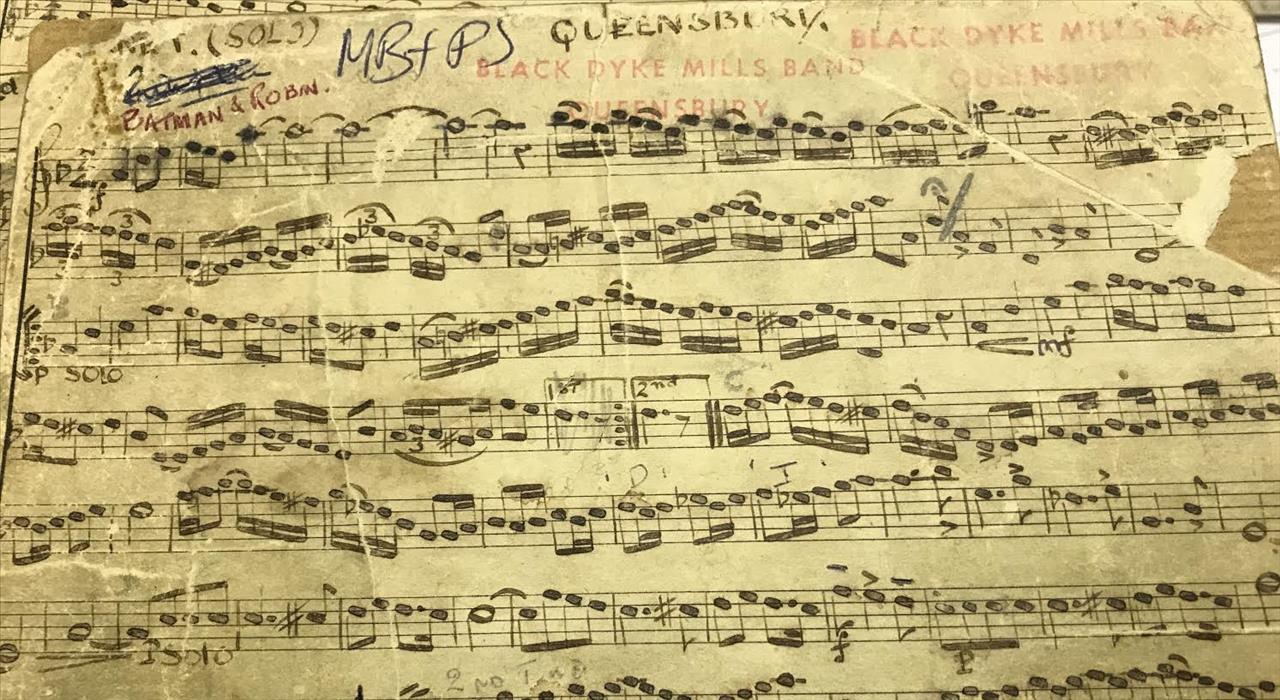 All greats and legends have played the fragile originals of 'Queensbury'.

Recently the band excavated the concert march ‘Pondashers’, written by Major George Willcocks (see above) - one that bears the conductors dedication in typed red ink; ‘... to those loyal supporters of ‘Dyke’ in times good or bad’.

Given that it was written in April 1959 – just a few months prior to one of their most famous National victories on ‘Le Roi d’Y’s’ - Major Willcocks must have perhaps known the good times were just around the corner. 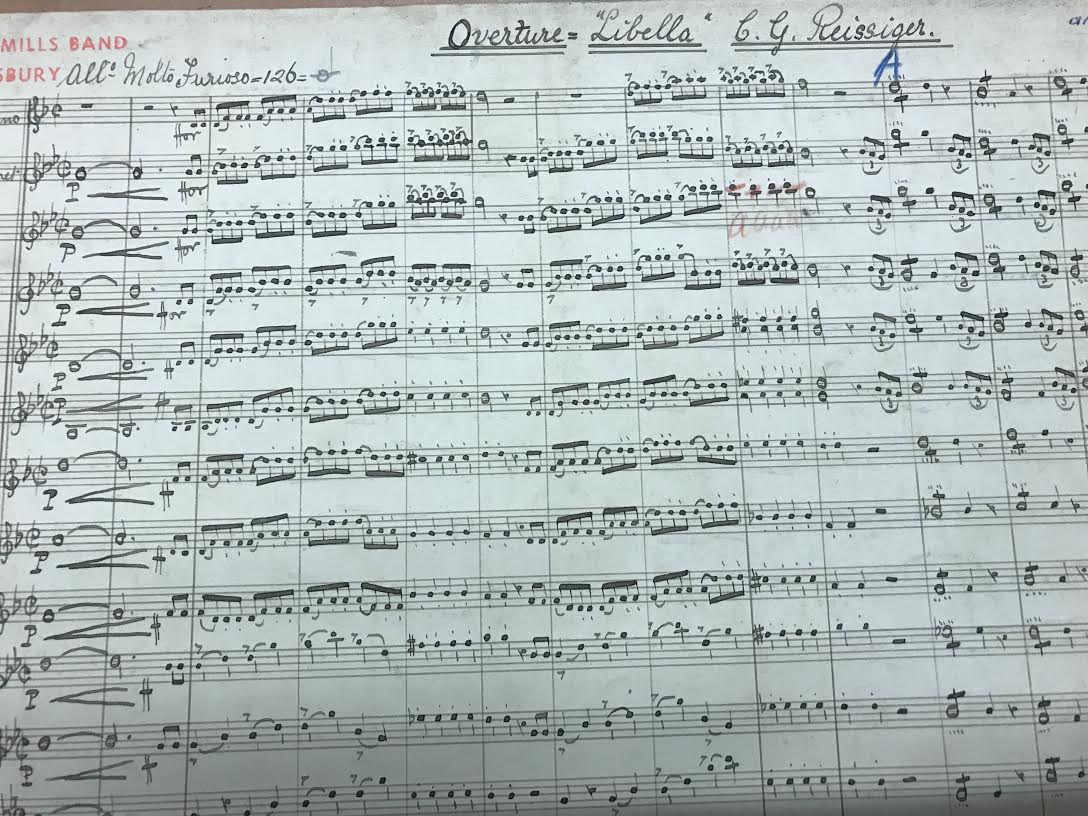 Then there are the amazing scores by J Weston Nicholls and John Gladney not to mention autographed parts to ‘Love Away’ by a certain Paul McCartney.  There has been so much found, and so much more still to find.

Only until you look at your watch do you realise that you have just spent two hours as the band rehearsed below you merely scratching the surface of a priceless trove of musical history.

Only until you look at your watch do you realise that you have just spent two hours as the band rehearsed below you merely scratching the surface of a priceless trove of musical history.

Thankfully though, it will now be one that will be conserved, celebrated and enjoyed by the banding world thanks to a timely piece of foresight and hour upon hour of hard work.

You close the heavy door eagerly anticipating the next time you are given the opportunity to explore it treasures once more.