4BR looks forward to the action at the Winter Gardens in Blackpool on Saturday — the arterial gateway to potential British Open glory. 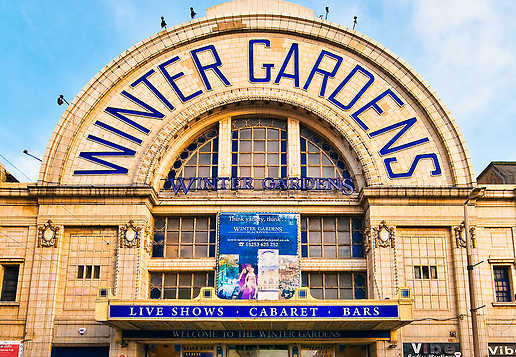 After the European delights of Utrecht this weekend it’s back to the domestic drama of Blackpool and the 98th British Open Spring Festival Championships in Blackpool.

Valaisia may have booked their place at Symphony Hall in 2019 (if they retain the British Open title the potential invite goes to Stavanger, if not, the result at the TivoliVredenberg means they return themselves), but come Saturday evening, the focus will be on which two UK bands could join them in Birmingham this September and those that may take a step closer to fulfilling their ultimate ambitions.

The prize of lining up with the likes of the newly crowned European Champion, the Norwegians of Eikanger Bjorsvik and an elite group of rivals means no seriously minded top flight contender at the Winter Gardens wants to miss out on that future chance.

Only two can ultimately get through this year, but with the clearly defined pyramid system of promotion and relegation linked to an easily understood qualifying process to get to Blackpool itself, every band knows that they are potentially just three years away from doing just that.

The prize of lining up with the likes of the newly crowned European Champion, the Norwegians of Eikanger Bjorsvik and an elite group of rivals means no seriously minded top flight contender at the Winter Gardens wants to miss out on that future chance.

No wonder then that the Spring Festival has become such an intensely attractive event (aided by three excellent set-works this year), and why the hard working contest organisers are starting to field requests from an ever increasing number of overseas bands wishing to look at spending a weekend in B&B accommodation in Blackpool over the next few years.

Blackpool may not have the beautiful canals of Utrecht to meander around without a care in the world, but it does provide the arteries of competitive travel to a destination everyone wants to get to.

The Opera House
Test Piece: The Triumph of Time (Peter Graham)
Adjudicators: Announced on the day 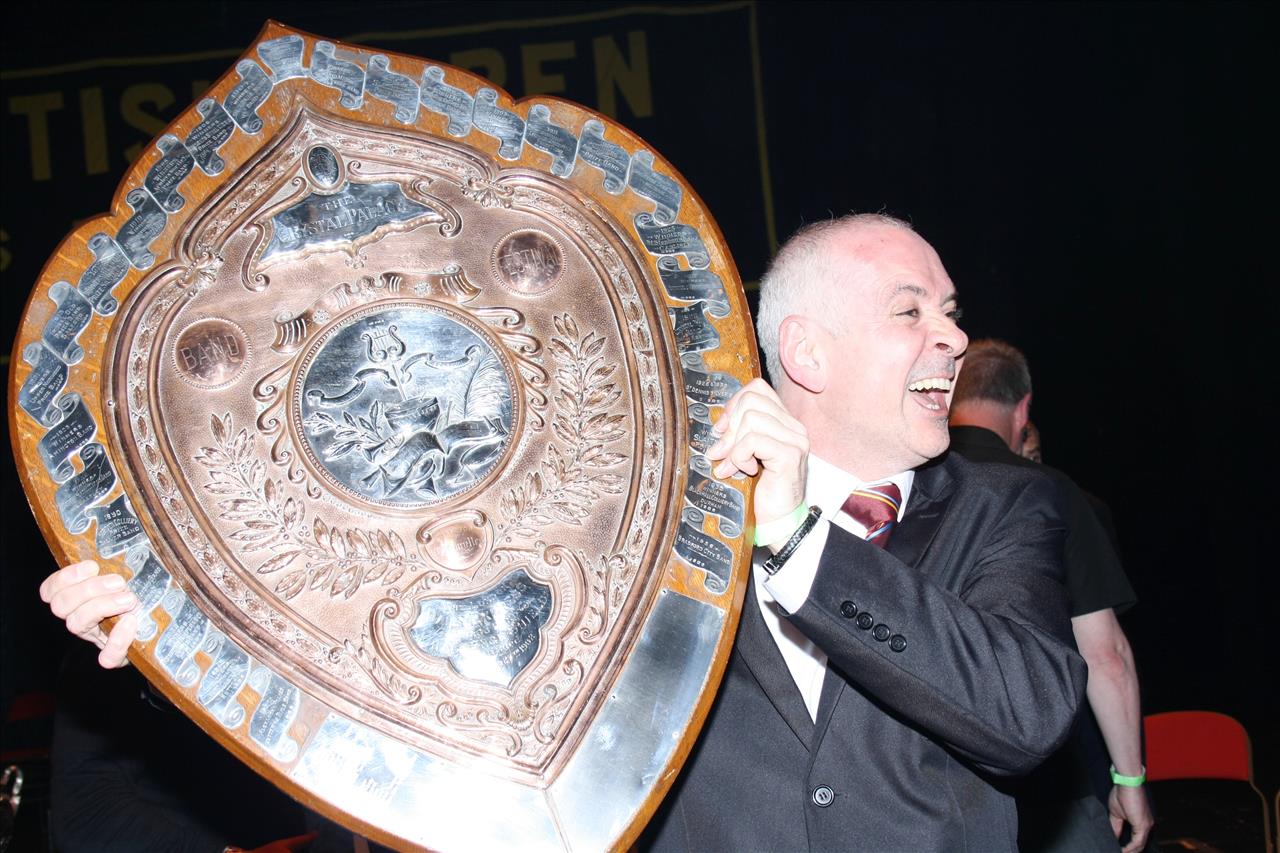 Who will emulate Whitburn in 2018?

Last year it was Whitburn who claimed the famous old Grand Shield - a result that ignited a remarkable run of form that saw them very nearly make it a ‘Double’ at the British Open itself.

Wingates joined them there, whilst dropping through the relegation trap door was Jaguar Land Rover and Milnrow.  There is so much to gain and so much to lose out on at this event. Second place is celebrated just as much as victory, whilst coming third hurts more than any other contest in the world.

This year the 20 contenders are faced with one of the most testing of set-works; Peter Graham’s ‘The Triumph of Time’.

Commissioned by Black Dyke to play at the 2014 European Championships, it was subsequently used at the British Open in 2016, and now, as is usually customary, it provides the acid test of true ambition that could burn through sheet steel let alone misplaced confidence.

It’s a fascinating work – a ‘Director’s Cut’ release that deliberately reveals its schematic musical narrative from the word go.

The transparency of the composer’s writing is linked to his craftsmanship – lucid, detailed and god-damn virtuosic:  Sales of Dr Charles Colin’s famous ‘Advanced Lip Flexibilities’ have most probably made Richard and Judy’s ‘Book of the Month’ in recent months.

It never lets up - from the pounding energy of its Jerry Goldsmith American cop show snapshots to its expressive solo spotlights; all coming to a climax of ‘Here to Eternity’ proportions.

The transparency of the composer’s writing is linked to his craftsmanship – lucid, detailed and god-damn virtuosic:  Sales of Dr Charles Colin’s famous ‘Advanced Lip Flexibilities’ have most probably made Richard and Judy’s ‘Book of the Month’ in recent months.

So who which pair will bask in the qualifying surf of consummated qualification glory like Burt Lancaster and Deborah Kerr then?

With the Scots of Kirkintilloch unfortunately dropping out, the Welsh of Llywdcoed retain their place in the starting line-up alongside the promoted quartet from the Senior Cup of Filton Concert, Friary Guildford, East Yorkshire Motor Services and City of Cardiff (Melingriffith) as well as the relegated British Open duo of Jaguar Land Rover and Milnrow.

The field also contains five confirmed National Finalists (including three Area winners), last year’s National First Section champion and a host of contenders all with realistic hopes of pushing closely for one of the two qualification spots on offer.

A hard one to call then (when isn’t it?) - with the bookie’s fancied runners perhaps coming in the shape of a back to form Virtuoso GUS and a determined Reg Vardy.

Woodfalls will want to give Dr Robert Childs a reminder of what he will be missing in future, whilst NASUWT Riverside could be right in the mix once more as they link up with Black Dyke’s Director of Music, Prof Nicholas Childs.

Milnrow, who were a tad unlucky to lose their Open status last year are a band not to under-estimate, whilst the strong looking Yorkshire duo of Hepworth and Hammonds and the increasingly impressive Friary Guildford may be worth a few bob as an each-way top-six bet. 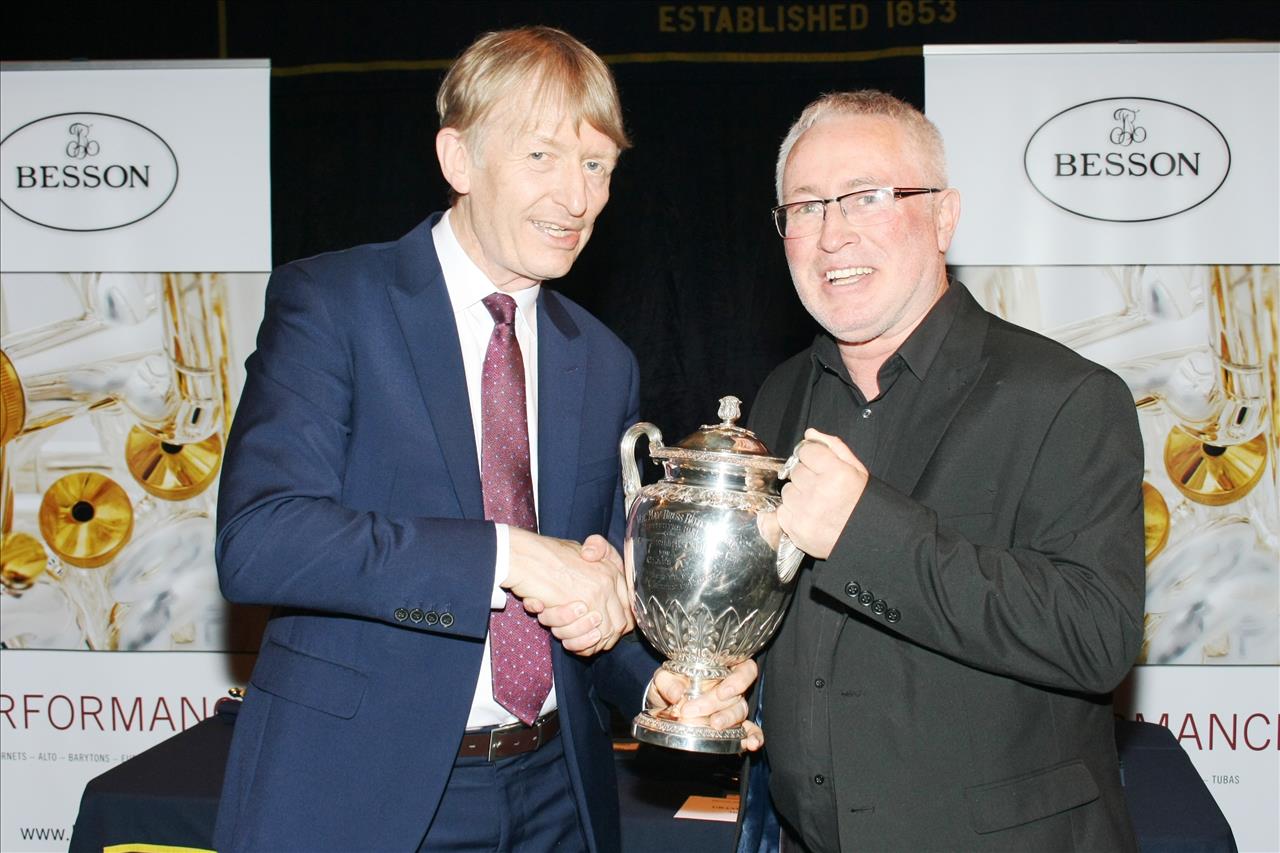 Who will emulate Filton Cocnert Brass in 2018?

20 bands will be faced with a wonderful test of their musical abilities in the Senior Cup, with Frank Wright’s arrangement of Guillaume Balay’s ‘Diadem of Gold’.

Its true brass banding provenance is still something of an enigma, although it’s unquestionably as French an import to these post war shores as Sacha Distel and the breakfast croissant.  The rather clumsy attempts to anglicise its identity so that it could be used at the 1953 National Championships of Great Britain should at last be replaced by a newly informed sense of musical ‘entente cordiale’.

All that because despite its age and dodgy passport credentials, it’s still a great work for both performers and listeners to enjoy; from the ominous opening fanfares and sense of dramatic tension, to the fleet footed soprano and cornet filigree work, the passionate, yearning central section and the all guns blazing ride for home.

It’s the type of music to be played marching down the Champs Elysees after a Gallic victory against the English at rugby – all bluff splendour, showmanship and sheer joie de vivre.

It’s also a piece that shouldn’t be taken lightly either – and not just for the sop players who are asked to display two integral aspects of their craft – sweetness of tone and a light fingered technique that would make the Artful Dodger ‘vert de jalousie’.

The MDs will also know that pacing that growing deep seated drama without losing dynamic control in the process is a hard trick to pull off. Diadems are fragile things of beauty – not a clumping bit of metalwork you see on the head of the dodgy Los Angeles rap artist.

It’s the type of music to be played marching down the Champs Elysees after a Gallic victory against the English at rugby – all bluff splendour, showmanship and sheer joie de vivre.

Those who get it right will gain one of the four promotion places to the Grand Shield, whilst the four that fail to impress the most will head through the relegation trap door to the Senior Trophy.

It promises to be a cracking contest in the Pavilion Theatre with any number of contenders more than capable of taking a step closer to Symphony Hall, or even raising the trophy itself.

Kirkintilloch’s withdrawal from the Grand Shield had the knock-one effect of keeping Redbridge in this contest and you feel that despite a disappointing showing at the Areas they could be the band to watch out for under Richard Ward.

The Scottish trio of Dalmellington, Newtongrange and Kingdom Brass could also travel south with high hopes of doing well on a piece that may inspire something of a musical ‘Auld Alliance’ in the hands of Richard Evans, Anne Crookston and Ian Porthouse, whilst the increasingly impressive St Dennis under Darren Hawken will be keen to go one better than they did last year and book a qualification berth.

Solid outfits such as Hatfield and TCTC Group are worth an each-way bet for a top-six place or better, whilst Northop Silver, Lydbrook and Oldham (Lees) could be the dark horses. 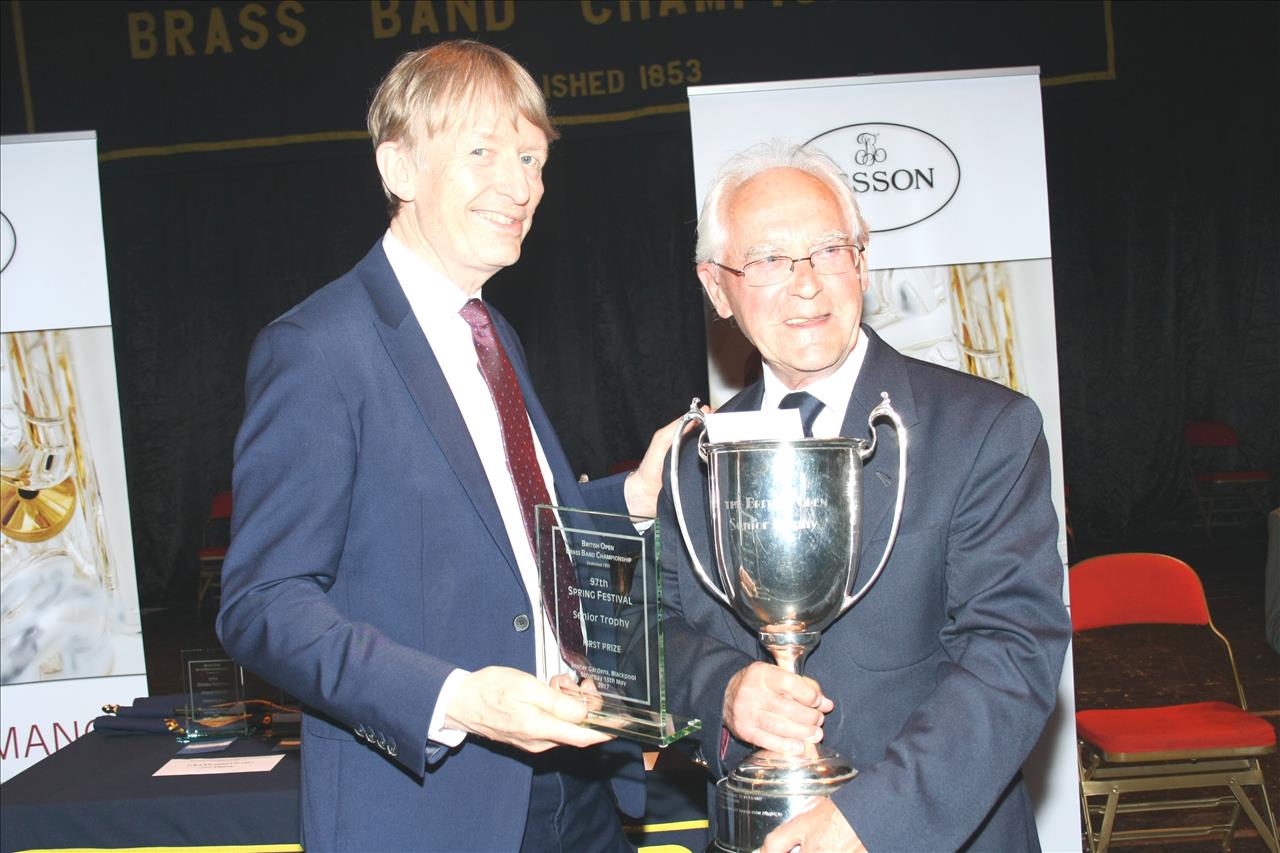 Who will emulate Dalmellington in 2018?

The first rung of the Spring Festival ladder is always difficult to take a step up from - as just about every one of the 20 contenders here wears as the same sized musical boots.

Meanwhile, the organisers have also ensured that they are subtly tested with a work that takes a great deal of intellect to master; Eric Ball’s affectionate Kensington portrait of times and friends past ensuring that any steroid enhanced attempts to bludgeon a way through to one of the four qualification places on offer will be an exercise in vacuous stupidity.

It’s not hard to work out why: You rather suspect his ‘... gay company of friends, now scattered, who in times past met annually in the Royal Albert Hall, London, on the occasion of the National Brass Band Championships’ weren’t exactly a bunch of ‘good time charlies’ who enjoyed a knees up down the Old Kent Road on a Saturday night, let alone a stag night blow-out on the Golden Mile.

Refinement, elegance and an inherent deep-seated sense of musical appreciation is needed to conquer ‘A Kensington Concerto’ – oh, and a solo cornet player with the appendages of a pawnbroker’s sign to play the deceptively easy, but treacherously ‘simple’ opening stanza.

The Spanish Hall can be a lively old place to play in at the best of times, but with its temporary cladding it may need an extra touch of delicacy in the dynamic stakes.  Get it right and the music glows with emotional recall, but get it wrong and can blow up in your face like the exploding head in Arnold Schwarzenegger’s ‘Total Recall’.

Refinement, elegance and an inherent deep-seated sense of musical appreciation is needed to conquer ‘A Kensington Concerto’ – oh, and a solo cornet player with the appendages of a pawnbroker’s sign to play the deceptively easy, but treacherously ‘simple’ opening stanza.

As Eric Ball was at pains to state; there is no ‘story’ to be told with ‘A Kensington Concerto’ - no narrative other than that of the unfolding ‘essay’ of sound, technique and emotion. Sounds simple then?

Plenty of bands with eager ambition here, and many of them are certainly on the upward curve of improvement and top flight solidity, with perhaps City of Bradford the stand out candidate in what looks a well-matched field.

They are an exciting outfit under Lee Skipsey to listen to, so if they can keep the adrenaline controlled they could be the band to beat.

Their Yorkshire counterparts Elland Silver and Marsden Silver are two strong looking contenders, with experienced MDs at the helm, as do Fishburn and the London & Southern Counties duo of Wantage and East London Brass who could be in the hunt for a promotion place or two with our dark horse of Ebbw Valley.