The joy of sax
2019 Saxhorn Fest makes a worldwide impression...

Almost half a million people know a bit more about the musical joys of the tenor horn and baritone thanks to the success of the Saxhorn Fest led by Katrina Marzella-Wheeler and Helen Varley. 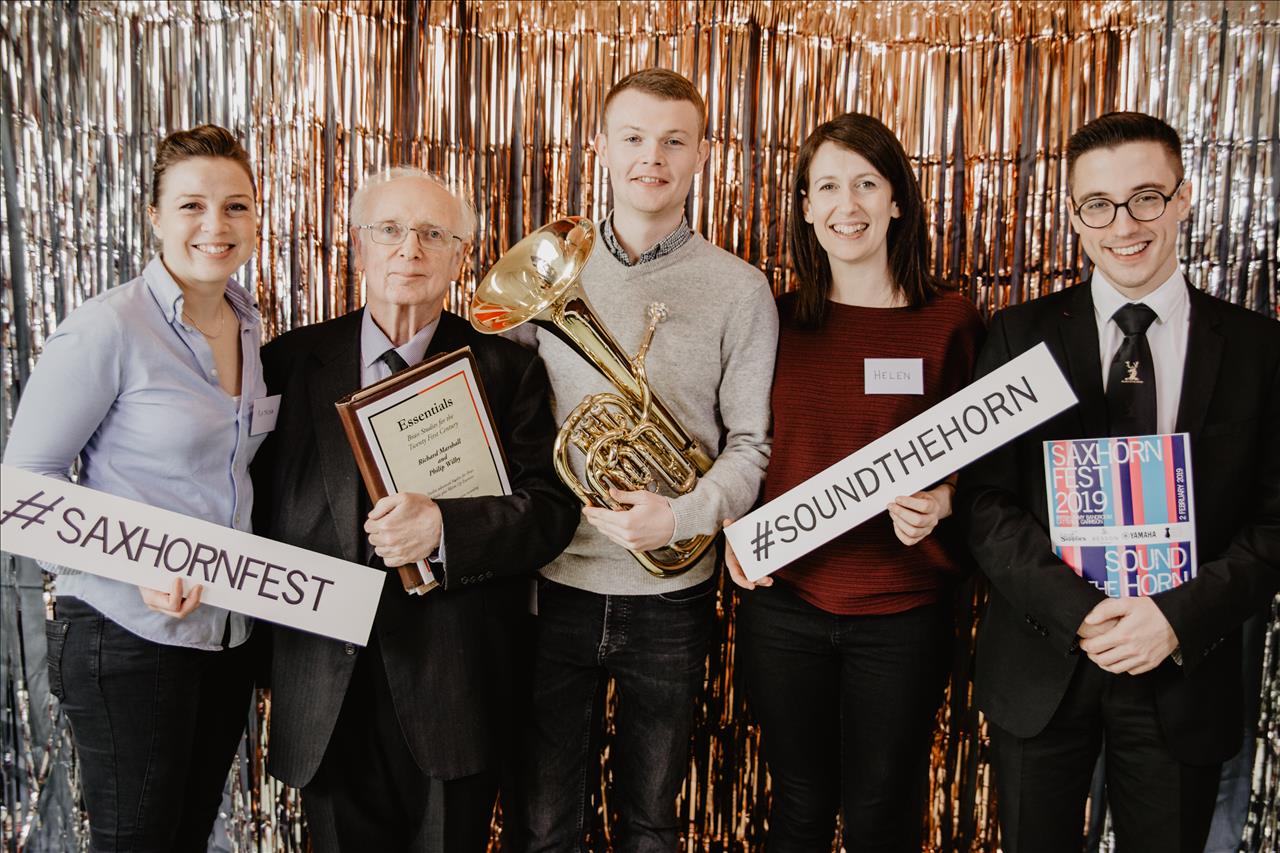 As the snowy conditions in parts of the country brought travel chaos and a day at home hibernating from the cold for many, over 60 brass players braved the weather to head to Richmond in North Yorkshire to take part in the second ‘Saxhorn Fest’.

A special event celebrating the unique characteristics of the tenor horn and baritone, it attracted delegates not only from the UK but also from as far afield as the USA, Sweden and Australia.

Not only that, but nearly half a million people read all about it on Sunday morning too...

Little wonder then that founders Katrina Marzella-Wheeler (Black Dyke) and Helen Varley (Grimethorpe Colliery) were delighted with its success.

“Saxhorn Fest is only in its second year of existence, yet its momentum is growing so strongly,” Helen explained.

“We’ve worked hard to capture the imagination of a wider general public and it was brilliant to find out that a picture taken by the respected press photographer Lorne Campbell was used in The Sunday Telegraph newspaper - meaning well over 450,000 people read about it.”

“We’ve worked hard to capture the imagination of a wider general public and it was brilliant to find out that a picture taken by the respected press photographer Lorne Campbell was used in The Sunday Telegraph newspaper - meaning well over 450,000 people read about it.” 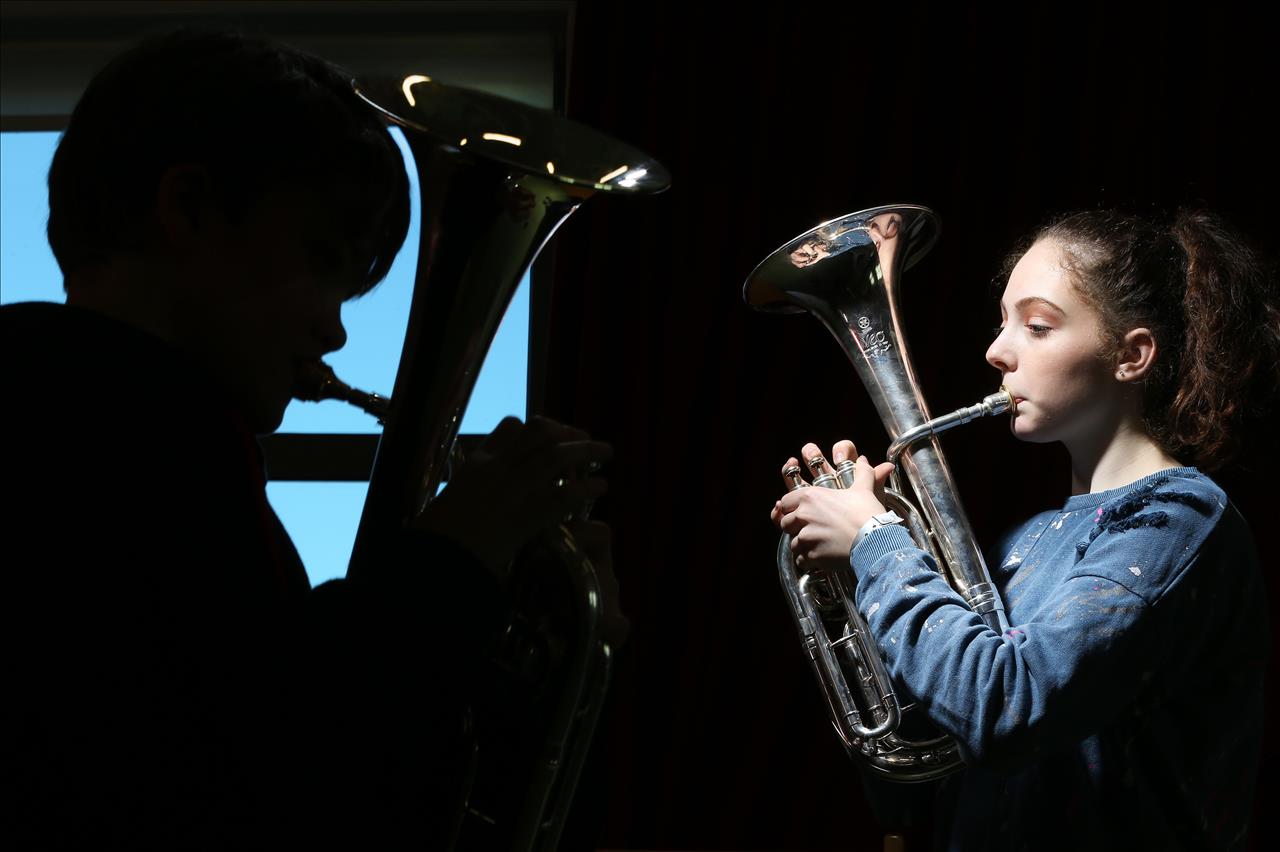 Katrina continued: “It goes without saying that Helen and I are passionate advocates of our instruments, and are lucky enough to play in two of the UK’s best bands.

With that however comes a responsibility to help promote our instruments, develop the repertoire and encourage other enthusiasts to learn and develop, no matter their age or level.”

She added: “The Saxhorn Fest is about bringing everyone together for a day of celebration, featuring guest speakers and masterclasses, as well as it being a showcase of leading talent in an evening recital.

It’s a true collaboration between our sister instruments and, I have to say, bringing these horns and their players together works brilliantly!”

Katrina and Helen led workshop masterclasses alongside massed ensemble workouts and a masterclass showcase by guest soloist, Michael Cavanagh of Grimethorpe Colliery and the award-winning A4 Brass Quartet.

Katrina and Helen are the best advocates the instruments could ever have and they organised a brilliant event.

He was also thrilled to be involved and believes the event has an important part to play in promoting the profiles of two vitally important brass instruments.

“It was a fantastic day,” he told 4BR. “Katrina and Helen are the best advocates the instruments could ever have and they organised a brilliant event.

It shows that there is a clear demand for a focus on these instruments, and I particularly enjoyed how it brought together like-minded players of all ages from all over the world.

It was a pleasure to lead a masterclass and perform in my role as guest soloist.” 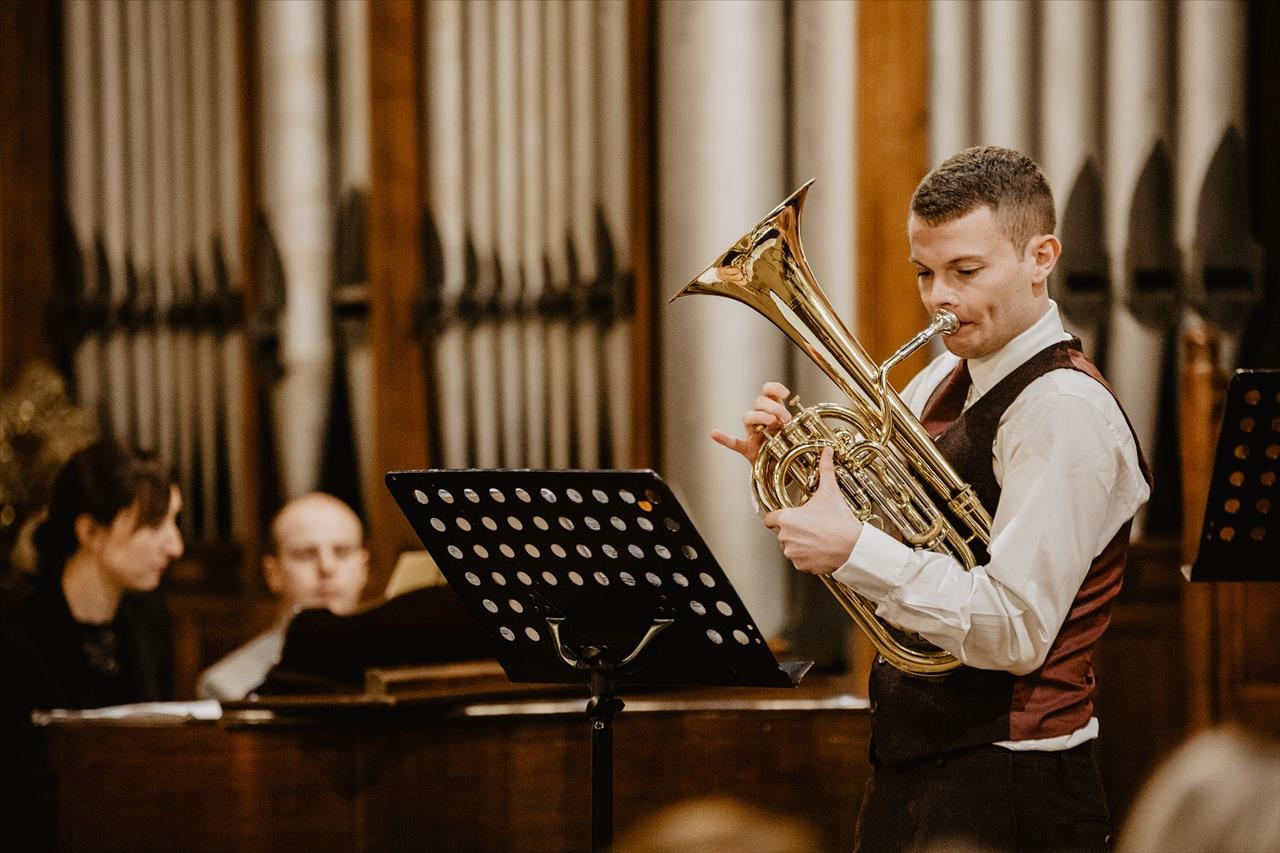 This year a successful development came in the form of a special ‘Saxhorn Youth Focus’, supported by Ronnie Tennant of Band Supplies Ltd.

It was led by the inspirational figure of Fiona Casewell, the respected solo baritone of Reg Vardy Band and a tutor at Durham University.

The youngsters gave an informal performance at the end of the day, which included the lovely sounds of Ingrid, a talent youngster from Sweden, as well as from the youngest delegate, Skye, at just 9 years of age.

At a time when there are well publicised pressures on music tuition services and with youngsters able to choose from any number after-school activities, Katrina was delighted that playing the horn and baritone is seen as being ‘cool’ with a new generation of players.

“That was the most heartening thing of all. The pride, endeavour, enthusiasm and love of playing the baritone and horn especially with the youngsters was fantastic. To see them proudly showing off their emerging talents was an inspiration in itself.

I think there were more than a few players here who the big bands will need to keep their eyes on.”

The pride, endeavour, enthusiasm and love of playing the baritone and horn especially with the youngsters was fantastic. To see them proudly showing off their emerging talents was an inspiration in itself. 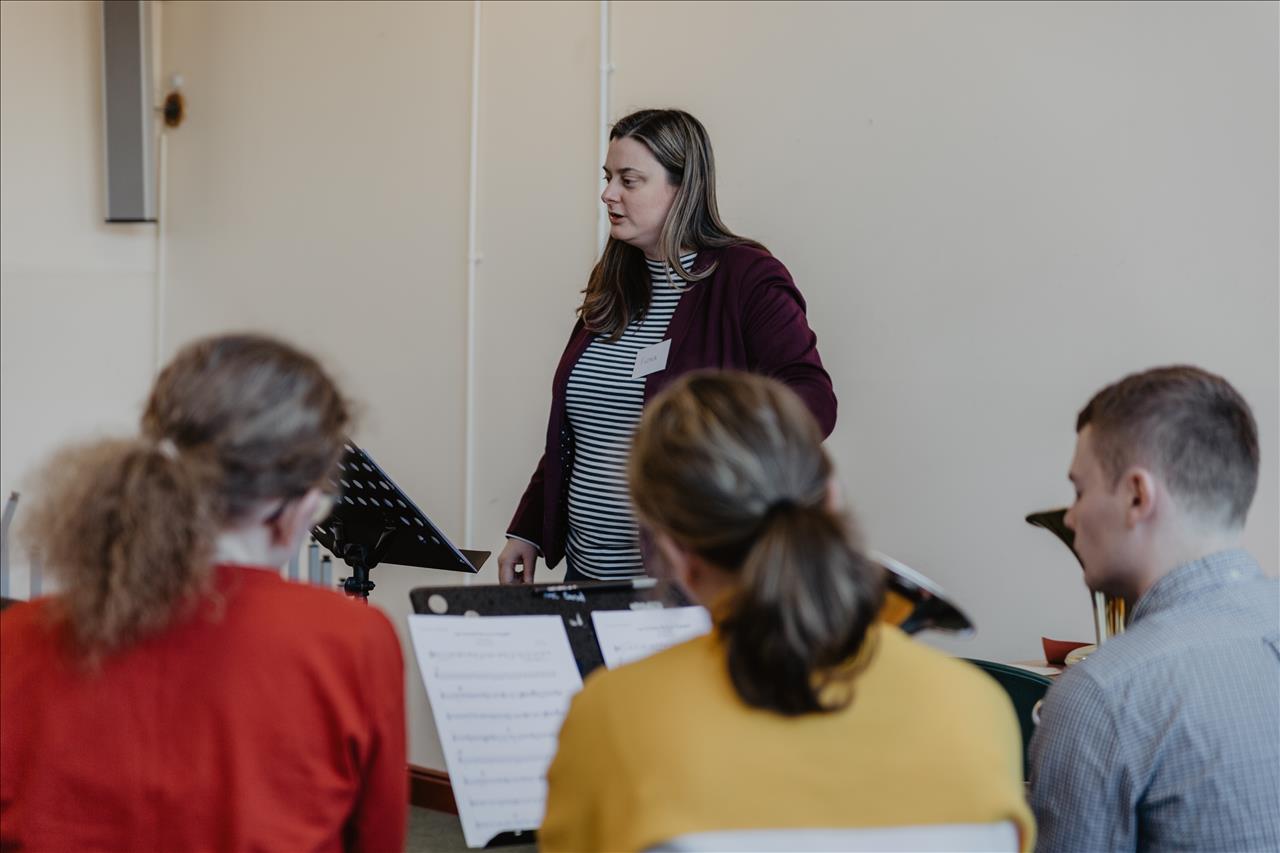 Katrina added: “We were delighted that instrument manufacturers, Besson and Yamaha agreed to sponsor the event and supported our vision, both from a musical and educational perspective.

Their involvement in Saxhorn Fest was pivotal and we want to extend a heart-felt thanks to them for their open-mindedness and generous support.”

The day sessions concluded with a jazz set and drinks at the Saxhorn Fest Bar.

Nat Martin (horn at Foden’s Band) and his band ‘4 Odd Dogs’ delighted the delegates with their set, which featured jazz standards and original compositions, as well as stunning solos from Nat and his band, all current students at the RNCM. It was certainly a party atmosphere! 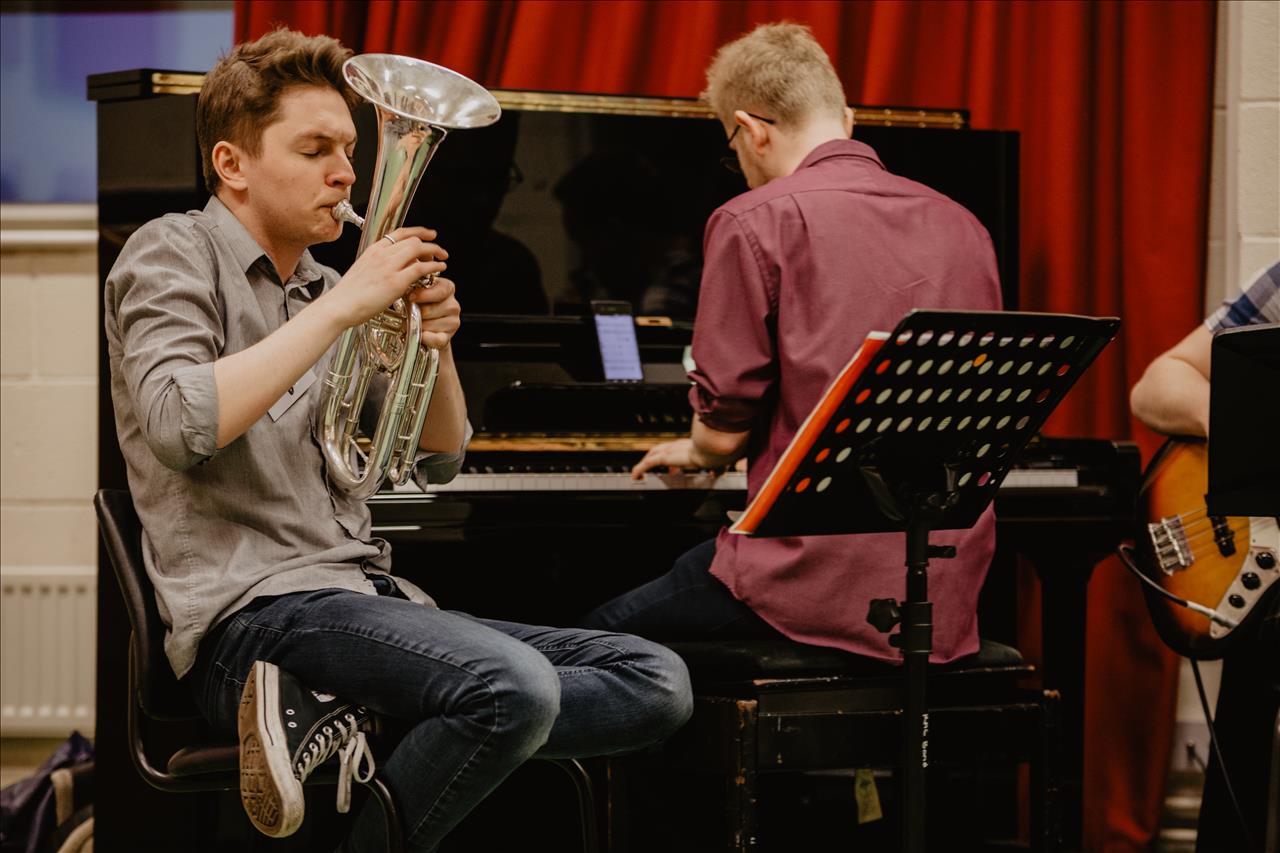 A great highlight however was the inspirational workshop given by composer Prof Philip Wilby, who talked about compositional techniques and his approach to writing for the middle band, as well as sharing stories about his test-pieces and his involvement in the brass band movement.

He later told 4BR: “It was a real winter’s festival; cold outside and warm indoors. It had super fellowship and great commitment from the delegates.

Also, we all enjoyed a stellar gala concert, crowned with a top class commission from Black Dyke’s new young composer Andy Wareham. It was a privilege to take part.”

It was a real winter’s festival; cold outside and warm indoors. It had super fellowship and great commitment from the delegates.

Meanwhile, Helen added: “We must also thank our hosts at the British Army, including the Band of the Royal Armoured Corps, who supported community music-making in this way, with many soldiers giving up their own time to be there on the day.” 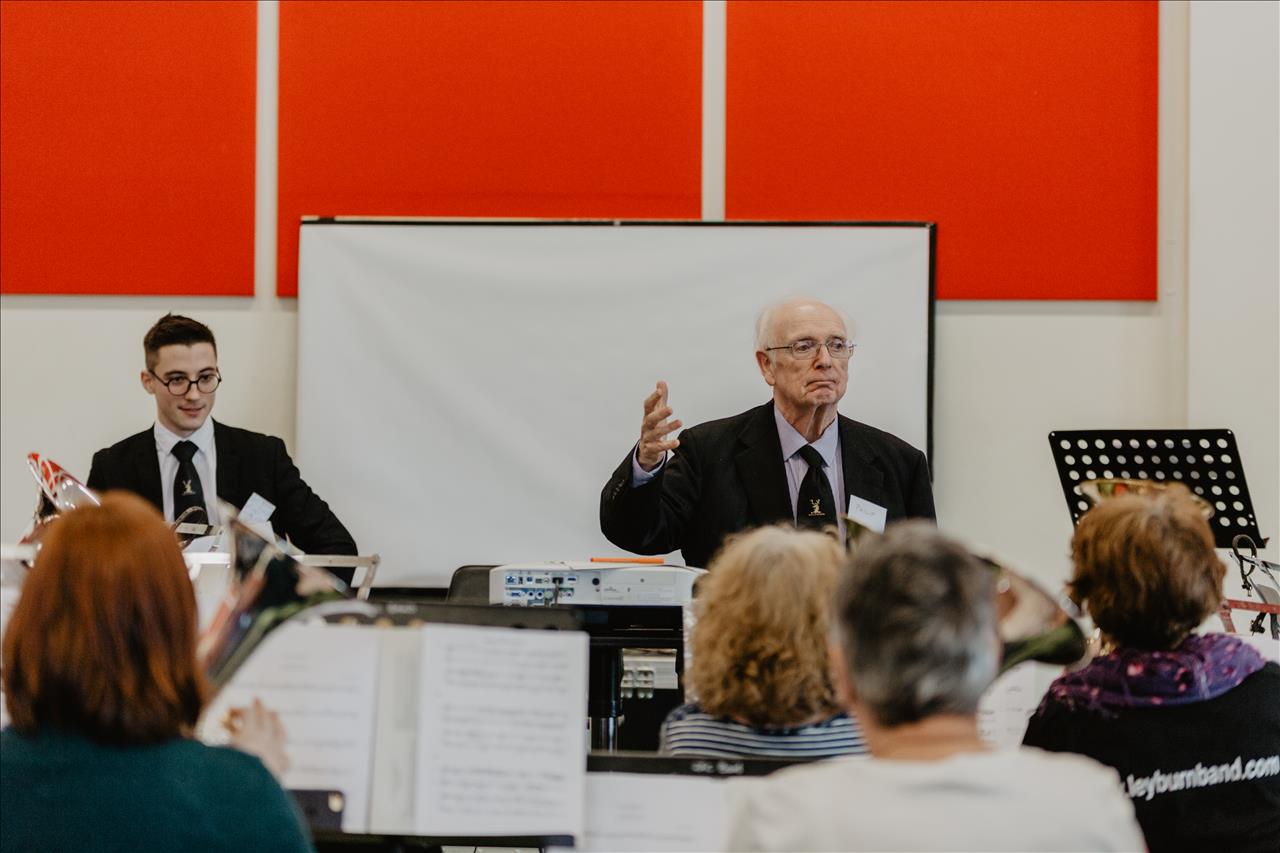 The player’s hard work certainly paid off in terms of sponsor support – with the event attracting a number of local businesses, including Hazel Whittal Photography, Nero Music Press and Kirklees Music.

Giving something back was important however and the Saxhorn Fest team nominated Create Boltones as their Charity of the Year for 2019, with delegates donating their spare change as well as taking part in a raffle, with prizes donated by Katrina, Black Dyke and Grimethorpe.

Marrianne ‘Maz’ Garbutt, of the Saxhorn Fest committee told 4BR: “We are pleased to report that Saxhorn Fest raised over £170 for Create Boltones.

It’s nice to do something to help this wonderful charity and we want to thank our delegates for their kindness.” 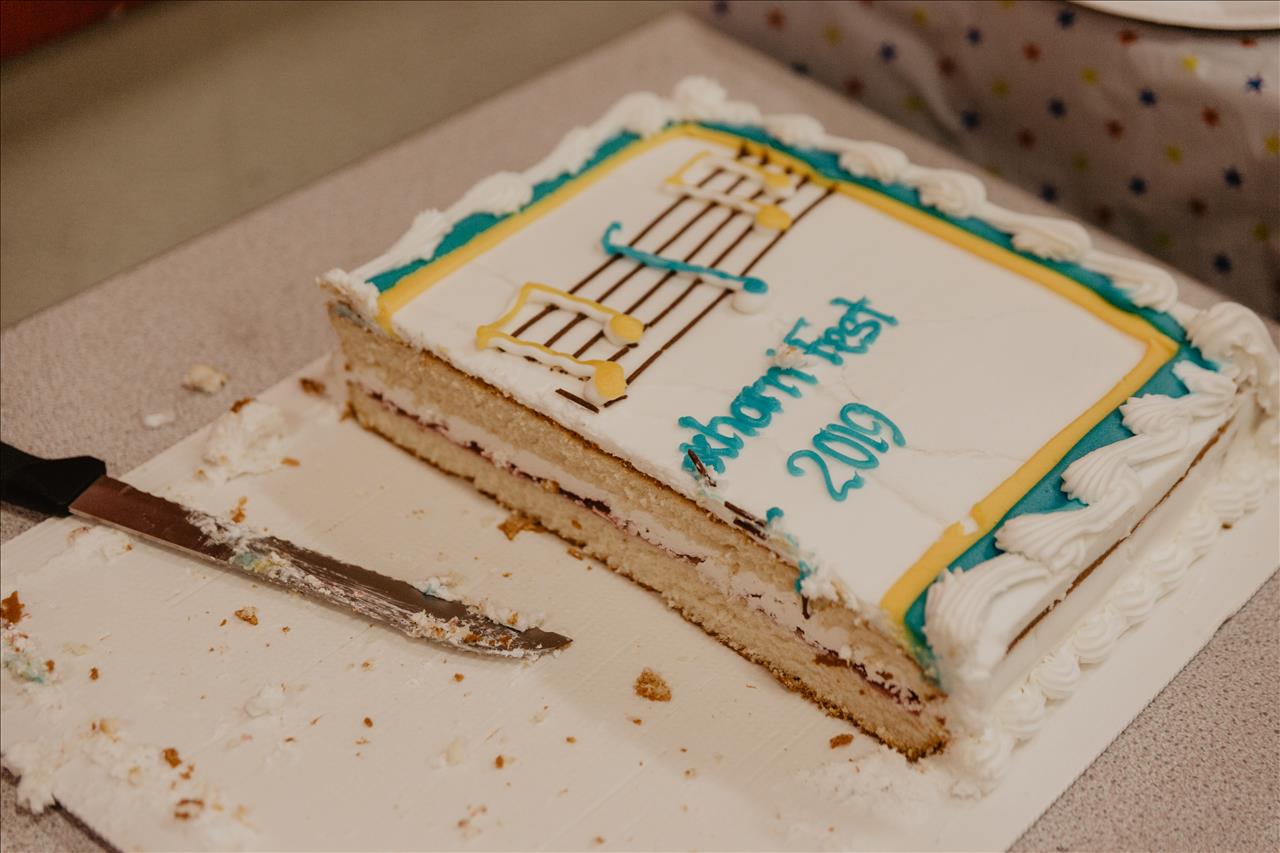 Having their cake and eating it...

​The beautiful St Mary’s Church in the centre of Richmond was the setting for the gala concert, appropriately entitled, ‘Sound the Horn’.

Many local music-lovers joined the delegates for the recital, which featured solo spots from Katrina and Helen, as well as guest soloist Michael Cavanagh, all accompanied by Ruth Webb on piano and Graham Mitchell on guitar.

For the finale, the soloists were joined by Nat for the first performance of the Saxhorn Fest 2019 Quartet. 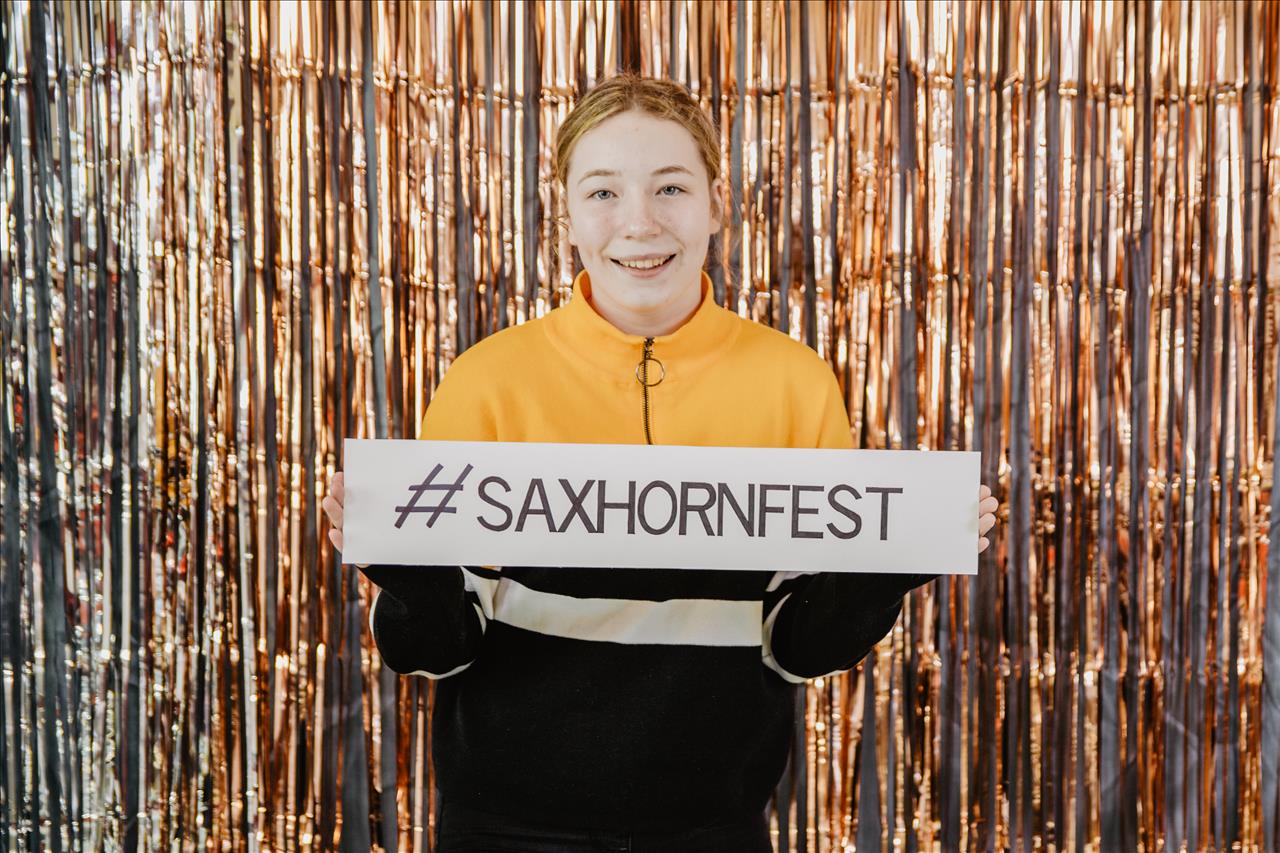 Getting the message out to players of all ages and abilities...

Katrina stated: “One of the aims of Saxhorn Fest was to showcase new music and in new settings for our instruments.

This year, Helen and I enjoyed duetting with guitar accompaniment, and the concert featured three world premieres of original music - Edgar Thompson (‘Fanfare: Sound the Horn’), Peter Graham (‘Tide & Torque’) and Andy Wareham’s ‘Minibeasts’, composed for Saxhorn Quartet and piano. What a cool score that was!”

The event was so well organised and made for a fantastic day of music making and learning.

In response Andy said he was delighted to add to the event. “This was my first experience of Saxhorn Fest and I was so impressed.

I think it’s a fantastic step forward for the banding movement.

The event was so well organised and made for a fantastic day of music making and learning. The evening concert was a particular highlight for me and it was a real privilege to hear my new work ‘Minibeasts’ premiered by such a brilliant quartet.” 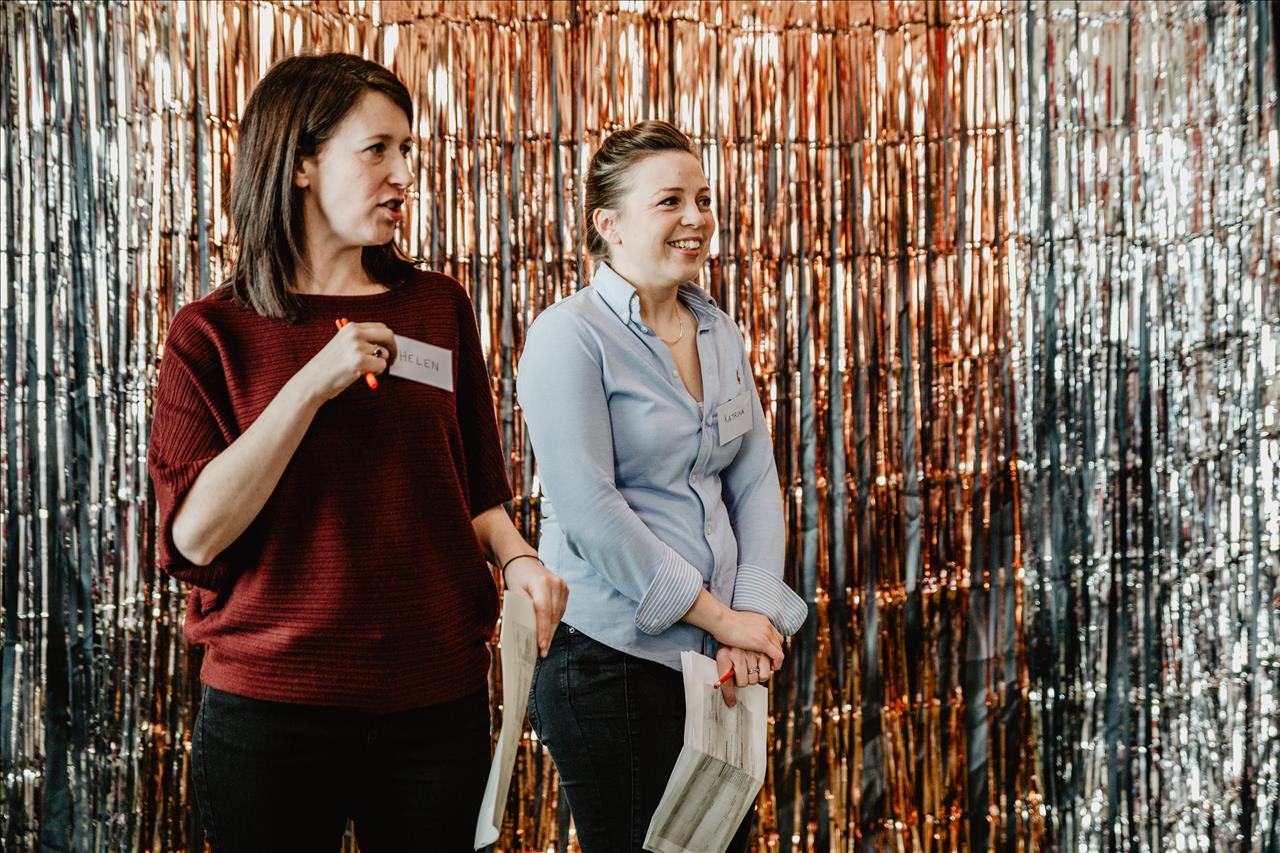 Leading from the front: Helen Varley and Katrina Marzella-Wheeler

Looking back, two delighted but exhausted founders told 4BR: “We counted after and realised there was an additional seven new arrangements in the concert, and even more from the sessions during the day, from musicians such as Sandy Smith, Philip Wilby and Liz Lane.

It was quite something - even the locals loved the variety of styles and sounds, with one trombonist jumping on eBay to buy a baritone straight after the gig!”

Helen said: “That summed up really what we wanted achieve - to inspire people to come and enjoy making music playing the tenor horn and baritone.

We want players to feel that they belong to a group that is vibrant, interesting and inspiring, so we will be updating our Facebook page and using social media all the year around to keep in touch until we meet up again.”

With thanks to Helen Varley and Katrina Marzella-Wheeler
Images: Courtesy and copyright of Hazel Whittall Photography - http://www.hazelwhittall.com