4BR Editor Iwan Fox previews the five different competitions being held in Montreux — and goes all Cassandra with his prophetic predictions. 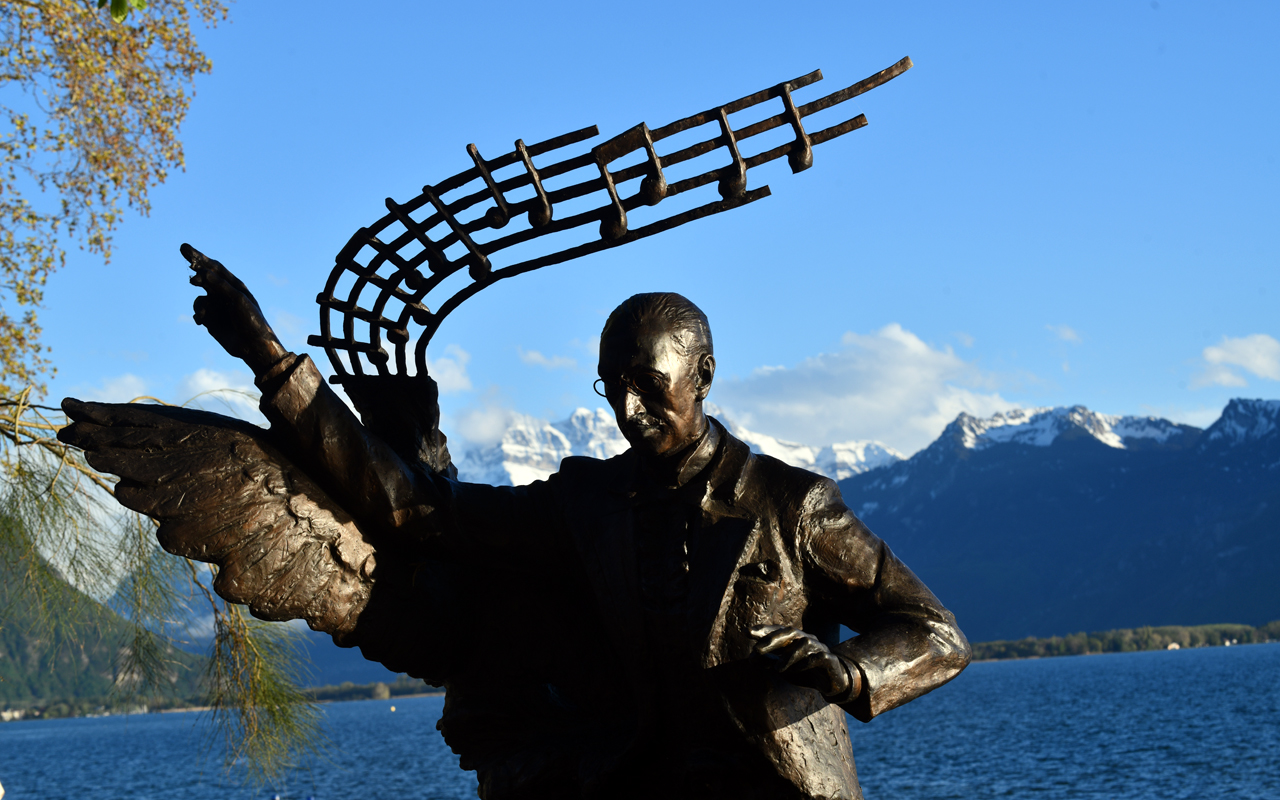 Stravinsky keeps an eye on the music

There are five fascinating competitions to look forward to this weekend in Montreux.

The aperitif at the local casino no less is dealt up with the seventh European Composer Competition on Thursday evening, when a trio of talented writers for the medium will have their works performed by Brass Band Treize Etoiles.

One of Stijn Aertgeerts, Daniel Hall and Paul Saggers will walk away with a prize worth 2,500 Euros for their efforts – hopefully without being tempted to double their money on the roulette wheel.

It should make for a highly entertaining start to the competitive proceedings. 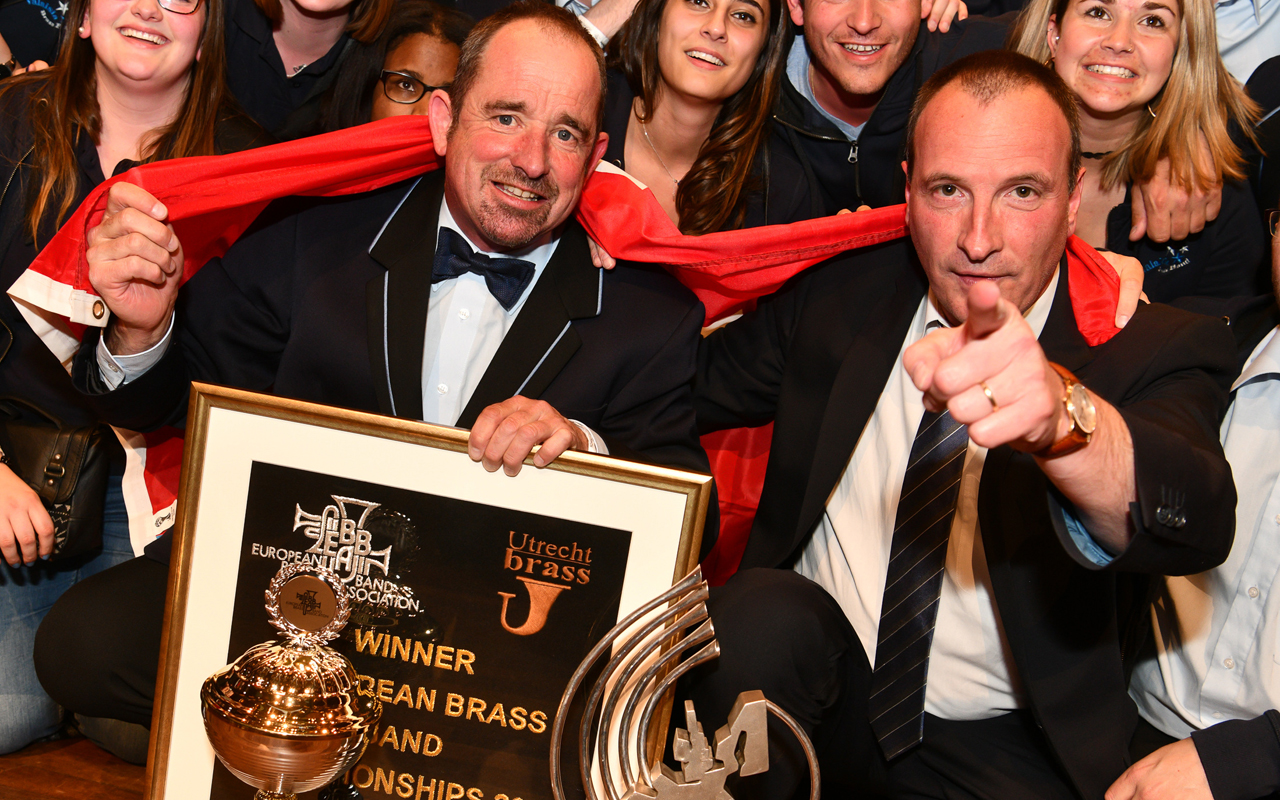 The main focus of attention will of course be on the 13 bands battling for the Championship Section title and the honour of being crowned 2019 Champion Band of Europe.

Friday sees them faced with Ludovic Neurohr’s prophetically fearsome ‘Dear Cassandra,’ - a set-work that will have taken some working out let alone playing, whilst Saturday is the traditional ‘Blockbuster Day’ and the own-choice selections that are sure to raise the roof of the Stravinsky Auditorium.

Supporters will each have their favourites, but the only people that count when it comes to deciding the destiny of the title will be Ian Bousfield, Herve Grelat and Bert Van Thienen on the set-work, and Jan Van der Roost, Thomas Reudi and Rieks van der Velde on the own-choice selections.  It won’t stop everyone else having an opinion though.

The defending champion is on home soil and in the finest of form.

Valaisia is a remarkable banding organization led by a remarkable conductor in Arsene Duc.  From almost nowhere in the past decade they have risen to become arguably the best contest band in the world (they have come either first or second at their last seven events - including two Europeans, two British Opens and three Swiss National Championships).

Their primary focus is competition.  Nothing else matters: It is the DNA of their existence.  And they will be the favourites here without a doubt.

Valaisia is a remarkable banding organization led by a remarkable conductor in Arsene Duc.  From almost nowhere in the past decade they have risen to become arguably the best contest band in the world

If they can handle the pressure of expectation (and there were a few little cracks shown when they were pushed hard to retain their Swiss title in November) they will be very hard to beat.

The band that very nearly topped them was their domestic rival Brass Band Bürgermusik Luzern, led by their inspirational MD Michael Bach.

They were in thrilling form at that contest - pushing Valaisia all the way to the line with the type of swashbuckling playing that saw them claim the European crown in 2014. That may an ominous sign for rivals, but a timely one for their legion of fans.

Talking of former champions, Cory will not want to leave Montreux empty handed.

Uncharacteristically wayward in losing their grip on the Welsh Area title in March, they still remain an immense contesting force under Philip Harper. Those who write them off do so at their peril. Over the two legs here they remain the most formidable of challengers.

So too Eikanger Bjorsvik, led by Ingar Bergby. In 2017, brimming with musical confidence they were unbeatable, in 2018 and bubbling with a touch of hubris they came fifth.  They won’t make that mistake a second time.

Neither will Brighouse & Rastrick.

Their last appearance in 2017 was undermined by an own-choice work that ill suited them - the result a lowly eighth place finish when they had been in contention after the first day. Prof David King will surely have had his say this time around. It could make all the difference.

In terms of consistency Brass Band Willebroek cannot be discounted from claiming a fourth title under their remarkable MD, Frans Violet. Whether they quite have that extra little bit of magic at present to take the title back to Belgium is open to debate, but their record is one to fear and respect by rivals.

These six seem to be the bookies favourites to feature in the prize lists, although the likes of Paris Brass Band (despite losing their grip on their National title earlier this year) and a re-emerging Brass Band Oberosterreich could be the dark horses to make a significant mark.

These six seem to be the bookies favourites to feature in the prize lists, although the likes of Paris Brass Band and a re-emerging Brass Band Oberosterreich could be the dark horses to make a significant mark.

And whilst it may be a major surprise if the likes of Provinciale Brass Band Groningen, Concord Brass, Gota Brass Band, Italian Brass Band (who have made such great progress in recent years ain the Challenge Section)  and 3BA Concert Band force their way into the prizes, there is more than enough quality about them to make a substantive impression.

As for a potential winner, we think it could well be a battle between the leviathan champions from Norway, Switzerland, Wales and England for us - and you suspect there is likely to be very little to choose between them.

It could come down to the narrowest of margins then, with Eikanger just a nose ahead of Valaisia, Cory and Brighouse & Rastrick with Luzern and Willebroek making up out top-six. Our dark horses are the French and the Austrians. 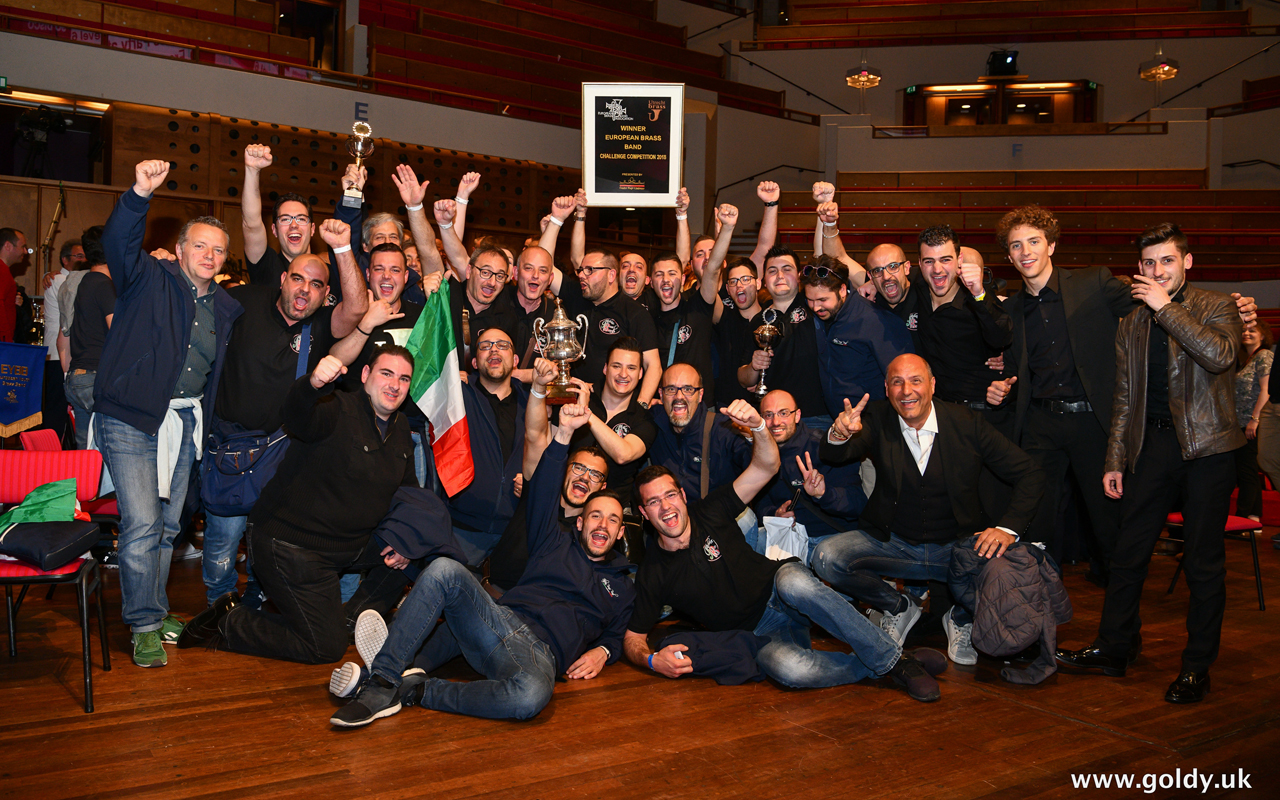 The Challenge Section continues to offer a stepping stone for emerging nations to enjoy the European Championship experience whilst allowing established countries to field a representative band if they cannot find a suitable representative for the Championship Section.

That accounts this year for the warm welcome offered to Malaga Brass Band from Spain, Brass Band Regensburg from Germany and Brass LT from Lithuania, in addition to 1st Old Boys from Northern Ireland and Annan Town from Scotland.

Malaga is a great success story - inspired by the evangelical musical zeal of Lito Fontana (who did so much to establish a sustainable Italian banding movement) as well as EBBA’s hopes of establishing a sustainable brass banding community in the country.

Both Regensburg and Brass LT are part of banding movements that are now growing deeper roots into their nation’s musical soil, whilst 1st Old Boys is a beacon of excellent organisation and youth development in Northern Ireland – now inspiring others to follow their example.

Malaga is a great success story - inspired by the evangelical musical zeal of Lito Fontana (who did so much to establish a sustainable Italian banding movement) as well as EBBA’s hopes of establishing a sustainable brass banding community in the country.

Annan in contrast keenly took up the invitation from the Scottish Brass Band Association after Scottish Champion Whitburn declined the invitation to compete in the Championship Section and no replacement band offered to replace them.

It’s an early start on Saturday morning (9.00am local time) with the band’s having to perform the evocative set-work, ‘Terezin’, by Mario Burki, which is inspired by a fortress built by the Emperor Josef II, ruler of the Austro-Hungarian empire from 1780-90.

He was also a noted patron of the arts and music, commissioning works from both Mozart and Beethoven. Although the building named after his mother Maria Theresa was supposed to be used for defence, it became infamous first of all as a prison, and later during the Second World War as a Jewish ghetto and concentration camp.

Much the for the adjudicators Ian Bousfield, Herve Grelat, Bert Van Thienen to compare and contrast then, and especially with the ambitious own-choice selections made, which include two performances of ‘Spectrum’ (Gilbert Vinter), ‘Sinfonietta No 3’ (Etienne Crausaz), ‘A London Overture’ (Philip Sparke) and ‘Essay’ (Edward Gregson).

It’s always a hard one to call with this contest, but we think it may just unfold with LT from Lithuania led by Russell Gray just having the edge over 1st Old Boys and Brass Band Regensburg with Annan Town and Malaga close on their heels. 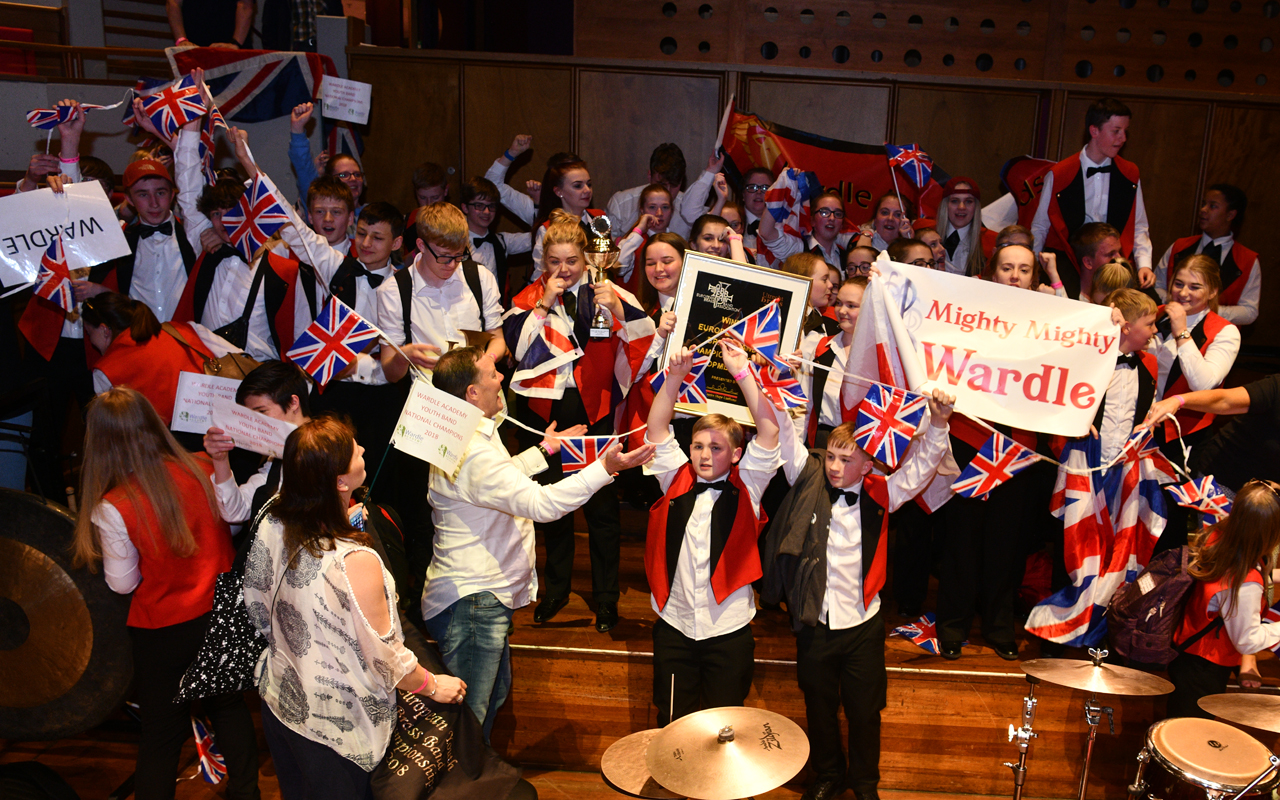 There is so much to look forward to with the European Youth Championships - although the band’s performances will hopefully be enjoyed by a packed audience in the Stravinsky Auditorium on Sunday.

The Development Section contenders will perform their own-choice work plus 'Argos' by Stephan Hodel, which was initially commissioned by the Luzerner Kantonal-Blasmusikverbandes LKBV.

Completed in 2009, it was the set-test piece in the Third Section of the 2010 Lucerne Cantonal Music Festival, Willisau.

Argos is one of the oldest cities in Greece, and was a powerful rival of Sparta, Athens, and Corinth. The word Argos can also be translated as 'bright' or 'shining', which is the meaning that Stephan Hodel has adopted for his bright, festive suite.

Approximately 8 minutes in duration it is in three parts; a fanfare-like opening, followed by a song or chorale-like middle section and a light-hearted final movement. 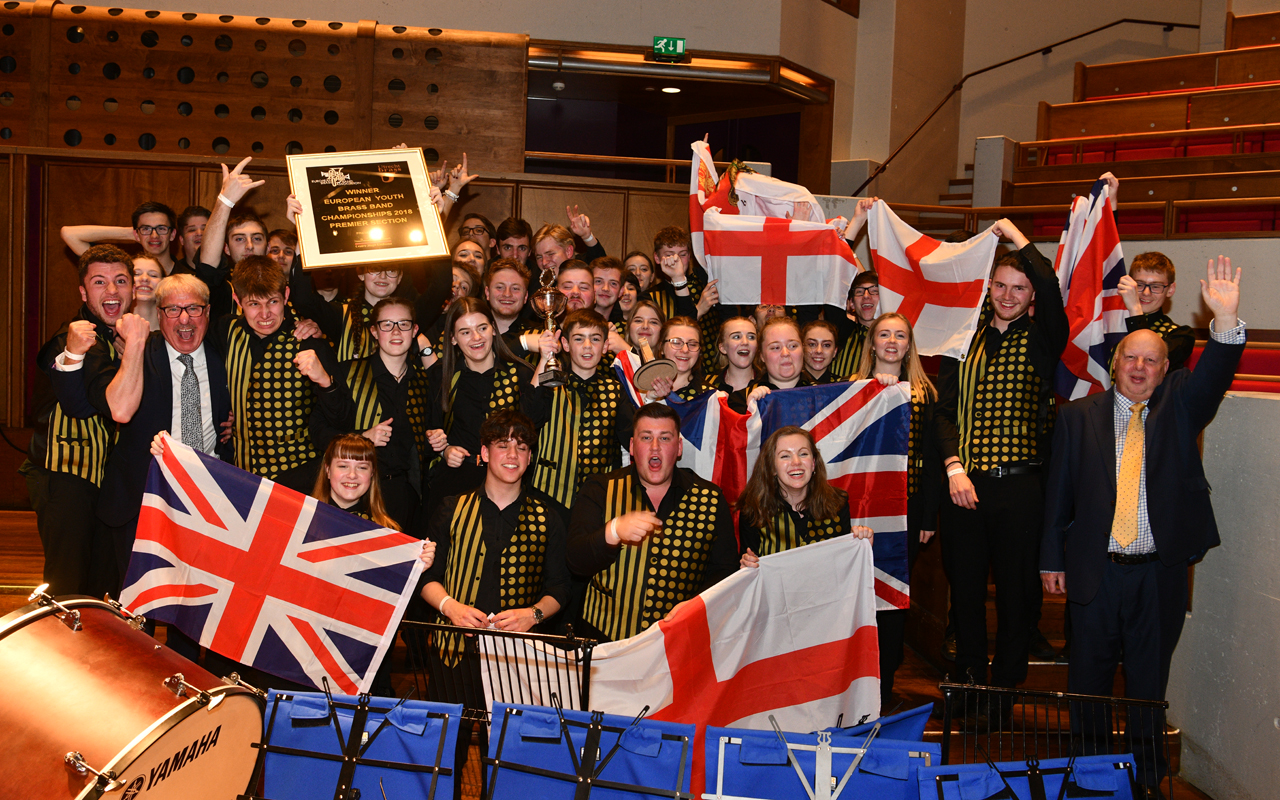 The Premiere Section contenders will perform their own-choice selection as well as 'Sanctuary!' by 21 year old Cornish composer Daniel Hall will test the bands in the Premier Section.

The work is inspired by Victor Hugo's famous Gothic novel, 'The Hunchback of Notre Dame', written in 1831. The title refers to the cry of the heroic bell ringer Quasimodo as he temporarily saves the heroine Esmerelda from the gallows.

The 10-minute three movement work is dominated by the sound of bells. The first, 'Cour des Miracles', depicts the colourful festival when the bells of Notre Dame ringing joyously.

The second, 'Miséricorde', is an ardent song from Quasimodo to his adored Esmerelda, declaring his unbounded love.

The final movement, 'ANANKH', refers to the message that Hugo intended for the book - describing fate and destiny (Esmerelda is betrayed, captured and consigned to death a second time).

The work concludes with a reprise of the love song, signifying hope and restoration.