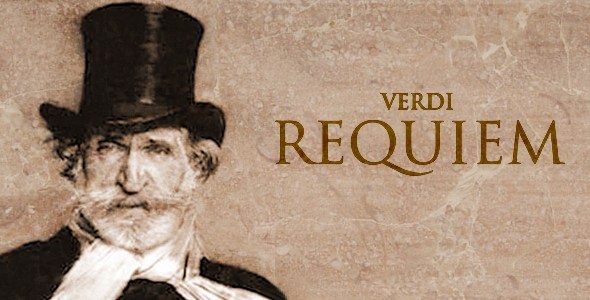 Popular because gorgeous and awe-inspiring - that’s the Verdi ‘Requiem’, a choral blockbuster inspired by death but pulsating with life.

It has been performed many times since its 1874 premiere in Milan, usually with an orchestra, the massed strings leading the way in the ‘Dies Irae’ (Day of Wrath), a musical roller-coaster descent.

But recently, in a tranquil spot in Weardale, you’d have found Steve Robson putting the finishing touches to something different for Durham County Council’s Durham BRASS festival – a transcription of Giuseppi Verdi’s famous creation to be performed by choirs and brass band.

Steve knows his brass band history. It was his dissertation subject when working as a mature student for his degree in brass band studies. “It became a bit of a passion of mine. But I majored in composition which I didn’t know a thing about when I started the course.”

Now it is composition that consumes him, and particularly the current task of transcribing Verdi’s orchestral score for the Reg Vardy Band to play at a special concert in Durham Cathedral.

BRASS artistic director Paul Gudgin is excited by the idea of two musical traditions deeply rooted in the area, choral and brass banding, coming together in this grandest of buildings.

Now it is composition that consumes him, and particularly the current task of transcribing Verdi’s orchestral score for the Reg Vardy Band to play at a special concert in Durham Cathedral.

Adding a frisson of internationalism to what promises to be a memorable affair will be a visiting American choir. The singers from the Preston Hollow Presbyterian Church in Dallas, Texas, will line up with the local Festival Chorus. 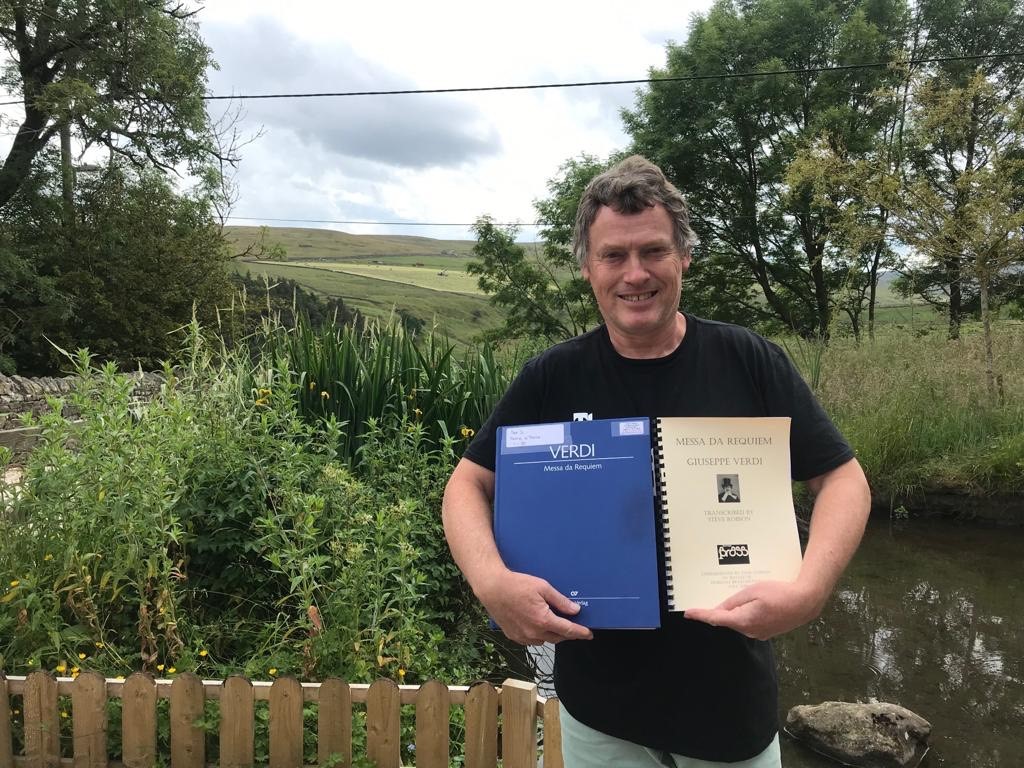 The new man behind it all - composer Steve Robson

Music is Steve Robson’s passion. He is organist at local High House Methodist Chapel in Ireshopeburn, near Stanhope, but is steeped in the brass band tradition, having played trombone since the age of 11 and, more recently, tuba.

That said, it has been largely a hobby until recently, he says. Caring for people with learning disabilities, who shared the family home, was the demanding full-time job.

“But I became conductor of Stanhope Silver Band which I did for 20 years. We took kids from the band to a summer school which is where I met Richard Evans, a fantastic conductor and my absolute hero, a man who walks into a room and everyone listens and learns.

He told me, ‘I run this brass band degree course and you’d be perfect’, so I enrolled on this four-year course at Accrington and Rossendale College.”

Steve, a self-confessed ‘Mr Mediocre’ at school, was thrilled to graduate in 2006 with first class honours accredited by Sheffield University.

Since then doors have swung open. Steve got involved with InterOpera which stages opera in town halls and needed someone to look after community engagement.

After productions of ‘Carmen’ and ‘Tosca’, Verdi’s ‘Rigoletto’ was next up. “But the funding went up the creek. They turned up on my doorstep and said, ‘Do you think there’s any way you could transcribe it for brass?’ That way it could be performed by people from the local community.”

Steve’s introduction to Verdi proved to be a rewarding baptism of fire. “It was a fantastic educational process for me, transcribing every note into a brass band score. You got to see how he composed the piece, the musical patterns with the same fragments of tune coming in different guises.”

“It was a fantastic educational process for me, transcribing every note into a brass band score. You got to see how he composed the piece, the musical patterns with the same fragments of tune coming in different guises.”

Steve talks about other triumphs – transcribing operatic pieces for a concert marking the 70th anniversary of the liberation of Bergen-Belsen and a performance of his own ‘Condatis’, inspired by a Celtic god, at Ushaw College, the splendid former Catholic seminary near Durham.

His first encounter with Paul Gudgin was when he asked Steve if he would be interested in transcribing ‘Belshazzar’s Feast’, William Walton’s choral classic, for the Reg Vardy Band at Durham BRASS 2017.

“It took me about half a millisecond to say yes,” smiles Steve. 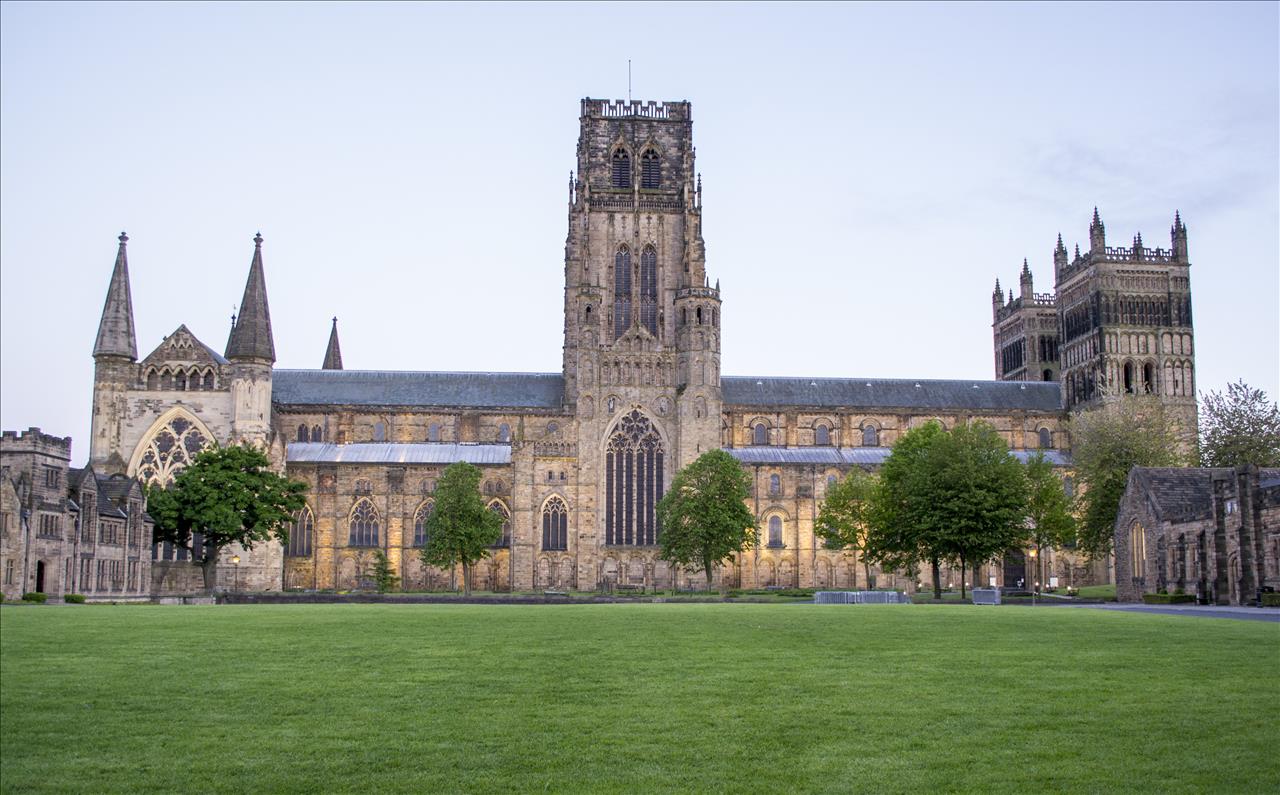 The magnificent Durham Cathedral will be the venue for the performance

No need to ask how it went. Paul returned to Steve for a similar treatment of the Verdi 'Requiem' with the Reg Vardy Band again booked to play and the cathedral again the venue.

To the question “When did you start?” Steve half-jokes: “Not soon enough.” The task “totally takes over”, he says.

The art of compromise

Certainly, it was not one to be sniffed at.

“If you look at an orchestral score the violins tend to be the lead and some of the music they play is so fast and furious.

The piccolo plays the highest notes. We’ve got a soprano cornet but no instrument that goes as high as a piccolo. Basically, I don’t have as many octaves of music to work with or the speed.”

In the ‘Dies Irae’, the problems are particularly acute. “It’s the art of compromise,” says Steve, demonstrating on-screen via his Sibelius annotation software.

“There isn’t a brass instrument that can go from up here to down there so I have to dovetail things, starting a run with one instrument and moving to another.”

In the ‘Dies Irae’, the problems are particularly acute. “It’s the art of compromise,” says Steve, demonstrating on-screen via his Sibelius annotation software.

Frustrations aside, Steve calls the project “a total and utter joy” and adds that he is beside himself with excitement awaiting the concert on July 20th.

He hopes it will win over devotees of brass to “some of the most fantastic music ever written” and appeal to classical music fans who love the work. 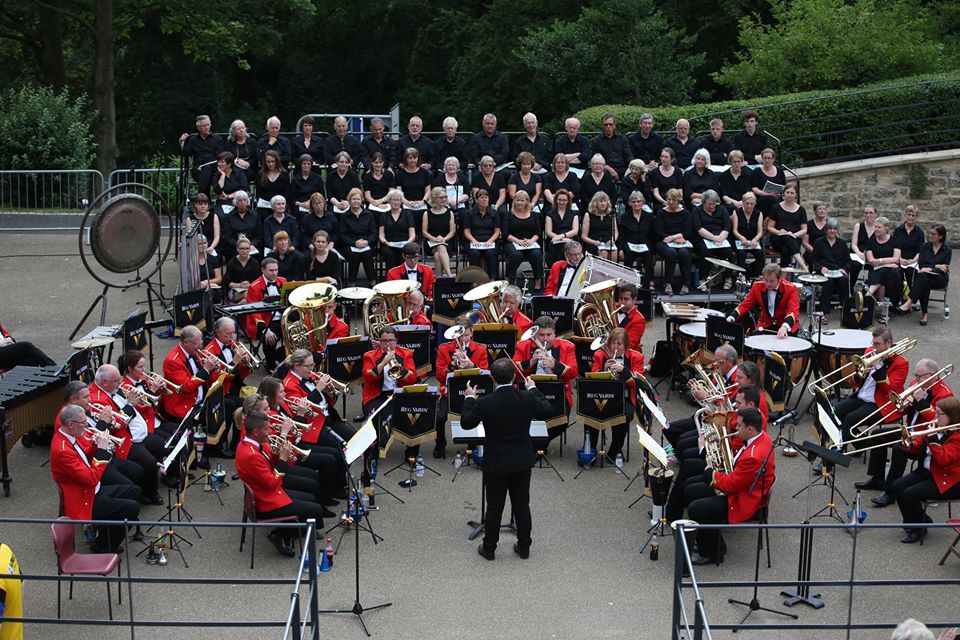 Paul Leddington Wright will be the conductor on the night. Steve will be listening, as will the man who, as chorus master, has been preparing the Festival Chorus for its role.

Mike Summers, head of Durham and Darlington Music Service, is also conductor of Durham Choral Society which has a lot of Festival Chorus members.

“We did this piece 18 months ago so it’s familiar,” he says. “I was chorus master for that because it was my choir doing it.”

That was ‘Defiant Requiem: Verdi at Terezin’, a homage to conductor Rafael Schachter and fellow inmates who performed Verdi’s famous work 16 times, though poignantly not with the same personnel, at Theresienstadt Concentration Camp (Terezin) during the Second World War.

“It’s really interesting how the same piece can be done in the same venue but will be so different,” says Mike.

“That performance was very reflective and sad but this won’t have such a strong social or political message. With the brass band I think it’ll be really uplifting with a completely different timbre.”

“It’s really interesting how the same piece can be done in the same venue but will be so different,” 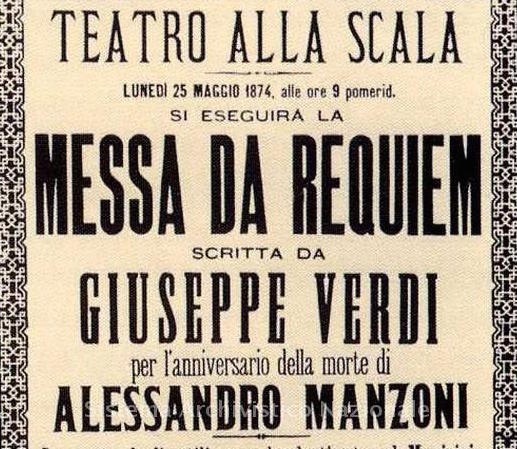 The poster for the world premiere performance in 1874

Touching on one of the problems Steve has had to overcome, he points out that human voices and brass instruments often occupy the same place on the musical register.

“The tenor horn, for instance, has a similar range to a tenor voice. You need to allow space for each to be heard.”

Both Steve and Mike are aware that Verdi declared himself to be agnostic.

“I always find it ironic, performing this requiem in a church,” says Steve. “Verdi didn’t write choral music. He was an operatic composer so I always prepare this piece as an opera. The choral elements are more dramatic than a Mozart or a Bach.”

Mike says his 80-strong choir will be joined by the 70 Texans with barely any time to rehearse together.

“But that’s the great thing about choral music – it’s worldwide. They’ll know the notes and hopefully we’ll slot in together.

The fact both choirs will be singing in Latin is a nice leveller. It should be a really interesting experience.”

Hear the Verdi Requiem in Durham Cathedral on Saturday, July 20 at 7.30pm. For ticket details and the full Durham BRASS programme, go to http://www.brassfestival.co.uk or tel. 03000 266600.