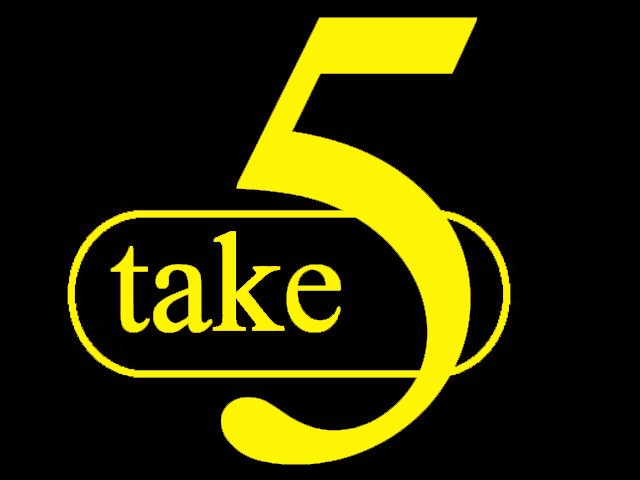 Every National title winning performance is memorable in one way or another – to the participants obviously, the listeners too, even rivals who may look back and wonder just how their own efforts were pipped at the post.

However, recall can play tricks on the memory, and what once was brilliance can fade in luminescence on renewed hearing.  In contrast, performances that may not have made an indelible mark first time around can grow in retrospective stature.

There are no commercial recordings from the contest itself prior to 1979 - although a swag-bag of surreptitious (to use a generous adjective for an illegal act) recordings were made by enthusiastic supporters and listeners over the years.

There are also several ‘Lap of Honour’ recordings made soon after triumphs (a number of which suffered due to ‘celebratory factors’) and some may well be hidden away in the vaults of the BBC from years gone by – although none we believe from the contests held at Crystal Palace.

There are also several ‘Lap of Honour’ recordings made soon after triumphs (a number of which suffered due to ‘celebratory factors’) and some may well be hidden away in the vaults of the BBC from years gone by – although none we believe from the contests held at Crystal Palace.

What a pity then that there isn’t a treasure trove to explore from 1900 onwards.

These then are five we think are well worth seeking out since 1979. 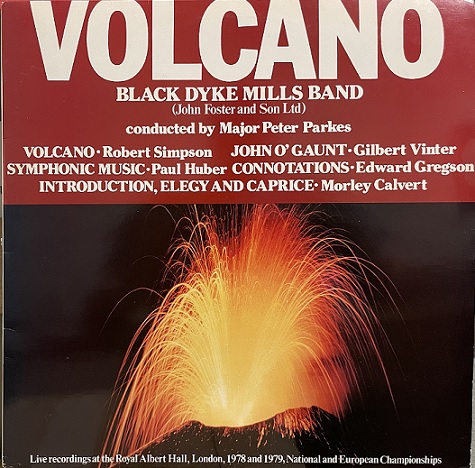 Robert Simpson (1921 - 1997) remains a rather enigmatic compositional figure within the brass band movement; his writing imbued with a deep affinity for the medium yet his works seemingly detached from mainstream trends.

‘Volcano’ is perhaps the most enigmatic of all; the propulsion of energy and flow (like lava from what he called “an evocation of a volcanic temperament”) intermittent and fluctuating.

The unease imbued by the different tempi is difficult to master - as is the sense of fearfulness that is broken by the two Meno mosso sections that separate the violent Allegros and the opening and closing Calmissimo sections.

‘Volcano’ is perhaps the most enigmatic of all; the propulsion of energy and flow (like lava from what he called “an evocation of a volcanic temperament”) intermittent and fluctuating.

At the 1979 contest Major Parkes and Black Dyke completely commanded the challenges of the score – despite the tonal vibrato textures at times being at odds with the composer’s intentions.

However, it is a quite remarkable performance – a veritable force of nature on a work that deserves to be heard again in all its glory. They won the title by 5 points. 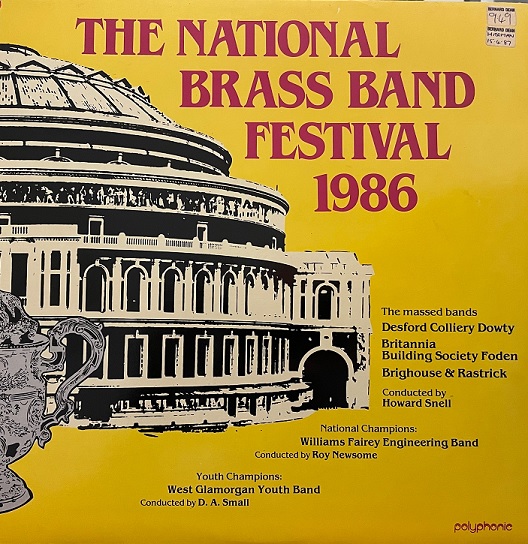 Recently re-released on the Wobplay.com recording platform, Roy Newsome’s only National title success as a conductor with Fairey Engineering is one of complete mastery of interpretation and execution.

‘Diversions’ is perhaps Bourgeois’ (1941-2017) most accessible work for the medium - eschewing many of the familiar tropes that were to be found in his later test-pieces.

Described in his obituary in The Guardian newspaper in 2017 as “the natural successor to Malcolm Arnold” it has a lucid tonality and structure, that, like Arnold at his best sets it apart - the dark humour sly and telling.

Newsome and Fairey captured it perfectly on the day – the opening bold but telling, the central section flowing with melancholy (and featuring a quite remarkable piece of lyrical artistry by soprano cornet Alan Wycherley), the finale, paced with growing energy and joyfulness.

They won by a point – but it was the clearest single point victory you could imagine. 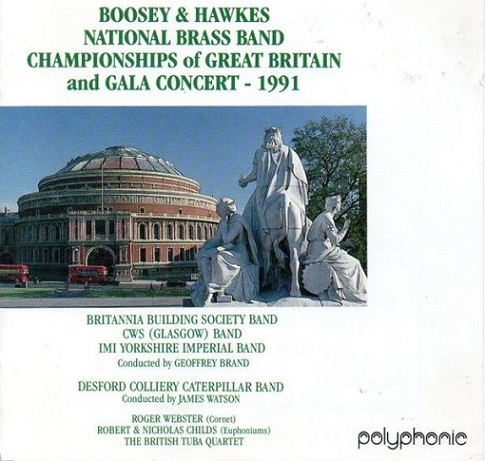 It's said that winning off an early draw at the Royal Albert Hall is an almost impossible feat – and the statistics do reinforce that opinion over the years.

However, it would have been a travesty if this performance from the number 3 draw by Desford Colliery was to have been beaten on the day.

Robert Simpson’s ‘Energy’ is an intellectual as well as musical masterpiece – as fresh and as challenging today as it was when first commissioned for the World Championships in 1971.

Robert Simpson’s ‘Energy’ is an intellectual as well as musical masterpiece – as fresh and as challenging today as it was when first commissioned for the World Championships in 1971.

It is literally a single, unbroken accelerando, similar in construct to the second movement of his ‘Symphony No 3’ (1962) and the concluding fugue of his vast ‘String Quartet No 9’ (1982) – the five short sections underpinned by a basic pulse that inexorably grows in momentum.

In 1991 it caused all sorts of troubles for the 23 competing bands – none managing to keep such a constant sense of the increase in calibrated energy as James Watson did with his fantastic band.  It’s playing of symphonic scope and understanding.

This was a band at the very peak of its combined powers in winning the title for a fourth time in five years (including the hat-trick which barred them in 1990) – and not even an early draw could have denied their rightful victory. 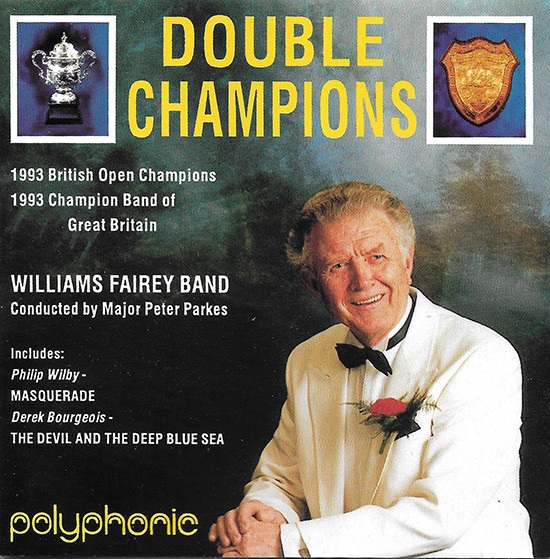 The last of the seven National title winning performances of Major Peter Parkes – and what a stunning one it was too.

This was Bourgeois at his most idiosyncratic as a composer for the medium – paying a form of Devil’s Advocate ‘homage’ to everything from Walton’s ‘Spitfire’ fugue to the 1970 Eurovision Song Contest winning entry ‘All Kinds of Everything’ by Irish singer Dana.

The piece though was much more than sardonic mockery – fiendishly difficult, stamina sapping and possessed of unexpected stylistic turns.

Parkes revelled in it; perfectly understanding the balance to be made between wit and virtuosity, the evocative drama of the opening and the calm repose of the end.  By the time Fairey (who was playing at a peak of performance perfection during the year) played off the number 9 draw they were three points ahead of the eventual runner-up. 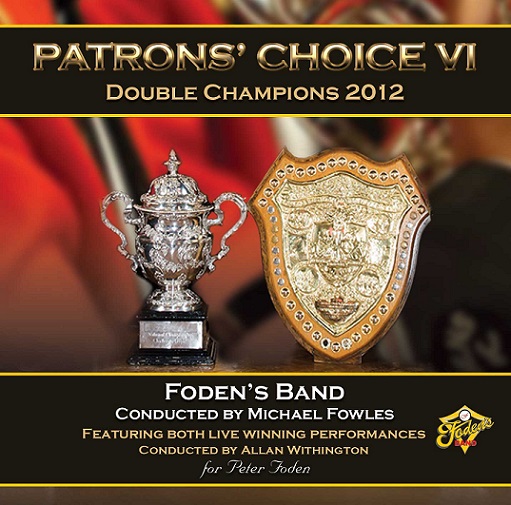 A reminder that the very best brass bands can give brilliantly inventive and colourful performances of orchestral works that on the face of it seem way beyond the tonal and textural scope of the medium.

That was due to Howard Snell’s genius for innovation as an arranger/adapter, as well as Allan Withington’s intuitive appreciation of just how to mix the sound palette together.

Snell’s masterful realisation made its first indelible impression in 1986 when he led Desford to the European title in Cardiff.

A quarter of a century later it still made your eyes pop open when the very best bands and MDs brought the full panoply of their talents to bear on it.

A quarter of a century later it still made your eyes pop open when the very best bands and MDs brought the full panoply of their talents to bear on it.

None though quite managed to mix the music so evocatively as the Bergen based Englishman – making it sound like a piece of French impressionism painting; tinted and flecked by the subtlest shades of colour and texture in the opening ‘Daybreak’, the emotion kept in check, yet the drama flowing through the veins – the ‘Danse Generale’ to close whipped with controlled fury.