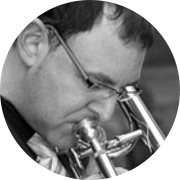 "The name Brett Baker has become an established, household name in the world of brass, not least for the level of commitment and focus that this outstanding musician has given to his craft." Commented Professor David King.

Englishman Brett Baker (B. 1973), is viewed internationally as a leading brass performer and educator. He is passionate about encouraging composers to write pioneering new repertoire being one of the most recorded brass soloists.

Brett is General Manager for the Geneva Group, he continues to be an ambassador for Michael Rath Brass Instruments and is Principal Trombone of the Black Dyke Band.

He was Festival Director of both the Singapore and Thailand Low Brass Festivals (2013-2017) and is a Past-President of the British Trombone Society (2010-2012). Brett has performed with singers such as Alison Goldfrapp and Hayley Westenra, trumpet soloist Alison Balsom and other world class trombone soloists including; Ian Bousfield, Wycliffe Gordon, Christian Lindberg and Joseph Alessi.

Brett has played as a soloist at the International Trombone Festival in the USA and Trombonanza in Argentina, the American Trombone Workshop in Virginia, the Great American Brass Band Festival in Kentucky and the Singapore, Philippine and Thailand Low Brass Festivals.

Originally from the Forest of Dean, Gloucestershire, Brett studied at the University of Salford, simultaneously joining the Fairey Band, conducted by Major Peter Parkes in 1992. He had many contest successes including an historic treble in 1993/4.

At Salford he was taught by Professor David King, whilst also studying for a degree in Business Economics. In 2000 he was invited to join the Black Dyke Band by Professor Nicholas Childs, achieving enviable contest successes. Now as well as a performance schedule of 60 concerts a year, Brett enjoys presenting workshops, specialising in solo performance and band training.

His research includes trombone solo repertoire, trombone instrument design through modular assembly and the psychology of performance. He was Programme Leader at the University of Salford Musical Arts degree from 2013-2019.

He regularly tours in the USA, Europe, Australia and New Zealand as a soloist, teacher, conductor and adjudicator. As a consultant, Brett, has worked with Michael Rath Musical Instruments for over 10 years on instrument design and has assisted in production of a signature mouthpiece as well as the R6 Rath Trombone.

As a conductor, Brett has many associations with bands in the North of England, and has achieved contest successes with Northop, Ratby and Longridge bands.

He has been guest conductor of the University of Salford Brass Band, the brass band at the Royal Northern College of Music, Thoresby Colliery, Carlton Main Frickley Colliery and the Leyland Band.

In 2014 Brett conducted Tongwynlais Temperance at the National Finals of Great Britain in the Royal Albert Hall, London. Brett was conductor of the University of Salford Symphonic Wind Band from 2014-2019.