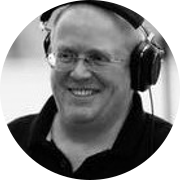 Sandy was born in Scotland and began his career with the Whitburn Band. Studying initially in Edinburgh he gained L.T.C.L. and L.L.C.M. teaching and performing diplomas and also became principal horn of the National Youth Brass Band of Scotland before moving to Yorkshire.

In a playing career as principal horn with the Black Dyke, Fairey and Grimethorpe bands he has won 6 British Open, 4 National Championships, 8 European, 6 Brass in Concert, 2 All England Masters and 11 championship section Area titles.

He also plays tenor horn and mellophonium in 'La Banda Europa', an orchestra of 35 diverse European instrumentalists and has also played with the BBC National Orchestra of Wales and the Stuttgart Radio Symphony Orchestra in works requiring tenor horn.

Sandy is a prolific arranger for brass having had his work recorded and performed by all of the leading UK bands for many years. He has lectured on brass band scoring, arranging and the history and repertoire of the brass band at Huddersfield University. His brass teaching activities have encompassed every stage of musical education from primary school to university standard including the RNCM in Manchester and Leeds College of Music. He has taught on many brass band residential courses including the National Youth Brass Band of Great Britain, the Brass Band Summer School and the National Youth Brass Band of Scotland. He obtained his PGCE in 1994.

Among the composers who have written works for him are Elgar Howarth, whose 'Horn Concerto' was premiered at the RNCM Festival of Brass in 2005 with the composer conducting the Grimethorpe band, John Golland, Peter Graham, Martin Ellerby, whose 'Tenor Horn Concerto' he premiered at the Bridgewater Hall in Manchester in 1999 with the Williams Fairey Band, and Andrew Duncan, whose 'Gambade' received its premiere on the Grimethorpe tour of Australia, New Zealand and Hong Kong in 2001.

He studied conducting at Huddersfield Polytechnic and began conducting brass bands in the late 1980s. He was been resident conductor of both the Brighouse and Rastrick Band and the Grimethorpe Colliery Band and has guested with many other bands.

Sandy was the brass orchestrator for the 'Pandemonium' and Olympic Anthem sections of the Opening Ceremony of the 2012 London Olympics and has worked as both arranger and conductor on collaborative projects with artists such as folk group The Unthanks, jazz trumpeter Matt Halsall, folk singer Kate Rusby and singer songwriter and synthesizer player Hannah Peel.

He is in increasing demand as an adjudicator at both national and local contests and is a vocal advocate for maintaining and promoting high quality repertoire as a key element in improving the standards of all bands, whether in the contest arena or on the concert platform.

He is co-founder and musical director of Tubular Brass and has arranged Mike Oldfield's seminal work 'Tubular Bells' for brass which has toured major venues and music festivals including Womad, Bluedot and the Edinburgh Festival fringe.