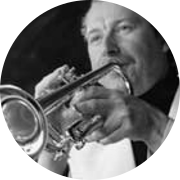 Born on the east coast of England, John Durrant started playing at the age of ten and played initially in local bands playing the trumpet and cornet and soprano cornet.

John played his first professional engagement a pier show at the age of fourteen and although later trained as a classical player his early playing sparked an enduring interest in light music, jazz and of course brass bands.

Whilst studying with Edgar Riches in London, he was spotted as a young talent by the late Philip Jones C.B.E. who kindly gave John lessons free of charge and greatly influenced him as a musician and a brass player and John won an open scholarship to the Royal College of Music where he studied with Richard “Bob” Walton. He worked with Philip Jones again whilst teaching the trumpet at the prestigious Chetham’s School of Music and has also been a visiting teacher and lecturer at the City of Liverpool College, University of East Anglia and Anglia Ruskin University.

His band recordings include an acclaimed version of the Raphael Mendez solo La Virgen de la Macarena and more modern solos such as the funk-based Blue Ice written for him by Dr John Halton while Musical Director of the Barrow Shipyard Band, with whom he made two National Finals appearances.

He has played in and conducted many bands over a 50 year link with the brass band world both as a player, conductor ,compose arranger and adjudicator including Coppul, Hogarth’s Preston (Warburtons Bakery), Leyland, Ransome, Hanwell, Guernsey Brass, Woking Band , Greggs Bakery, Mathews Norfolk Brass,City of Oxford, and many more many of whom have enjoyed contest success, often by clear points. Soon to added to the list will be his friends at Sovereign Brass in Birmingham UK.

John has played in a wide range of professional groups in Europe, Japan, Africa and of course the United Kingdom and Channel Islands , including the Gerry Bosman Pops Orchestra ,the SABC symphony orchestra, National Chamber Orchestra, jazz and recording orchestras for films and television. John has also appeared as Harry James headlining in several Swing Gala productions. The summer of 2018 saw a sell-out season at the Babylon Arts Centre in Cambridgeshire headlining in “Jazz at the Babylon”.

As a soloist John has recorded many works, including the cult recording Recital Gems for Trumpet and Piano with the well known pianist Russell Lomas, soon to be re-mastered and has led sections in studios across the world, recording music scores for such projects as diverse as, “The Bible” and Miss World. John has also worked with the music producer, Bruce Cassidy, formerly of Blood Sweat and Tears, working in what was then one of the most advanced recording studios in the world near Sun City.

John has recently composed, edited and arranged music for the professional theatre, including music for Ages of Man with RSC, film and television actor, Andrew Jarvis for the King’s Lynn Shakespeare Festival which was also starring Sir Ian McKellen.

John’s pupils have consistently gained places at major music conservatories and universities and have had success in competitions such as BBC Young Musician of the Year. He is now in demand as a clinician and tutor in addition to his work as trumpet player, composer and arranger, classical, baroque and big band soloist and of course, conductor.

"I have to say immediately how impressed I have been by the superb standard of the band and especially of the soloists. I should mention the brilliant cornet pyrotechnics of John Durrant in 'La Virgen de la Macarena' (which is also his arrangement)." — Gary Higginson