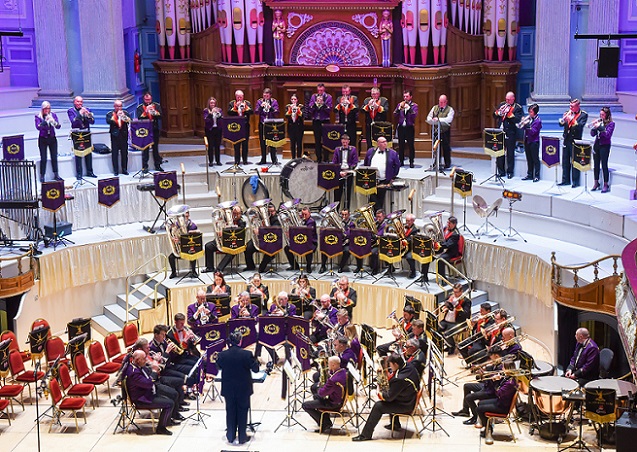 Two years later than originally planned and some 27 years after their last massed band stage appearance together at Huddersfield Town Hall, Brighouse & Rastrick welcomed their near neighbours and traditional rivals Black Dyke for this much-anticipated concert.

It should have taken place in 2020 as part of the 75th anniversary of the West Riding band’s celebrated twice-yearly events, so with Covid-19 restrictions finally coming to an end little wonder over 900 brass band lovers eagerly took to their seats to hear the combined splendour.

Guest conductor, Prof Nicholas Childs had deliberately chosen an easy listening programme to appeal to purists and occasional punters alike, as well as temper to the needs of a somewhat surprising number of changes in ensemble personnel.

Despite the absence of familiar faces in the ranks of purple and silver as well as black, red and gold, the quality was not diminished; the MDs strict control of tempi and especially dynamic marked from the word go.

Sousa's 'Liberty Bell'  was a playful opener that lent contrast to the warm ensemble sounds of Brahms’ 'Academic Festival Overture'  – the rich counterpoint scoring driven with the ironic boisterousness of student playfulness.

The reflective central interlude had an eloquent tenderness before the rousing drive of the finale brought a hugely satisfying performance to a close. Rimsky-Korsakov’s 'Cappricio Espagnol' sent the audience to the interval with a spring in their step.

Daniel Thomas dazzled with a virtuosic 'Bravura'  and ‘Let’s Face the Music and Dance’  offered a stylish detour before the serious undercurrents of Dean Goffin's 'Rhapsody in Brass'; its telling rhythmic patterns underpinning the clearly defined opening section.

The reflective central interlude had an eloquent tenderness before the rousing drive of the finale brought a hugely satisfying performance to a close. Rimsky-Korsakov’s 'Cappricio Espagnol'  sent the audience to the interval with a spring in their step.

B&R President, Stephen Howes acknowledged the contributions of a host of volunteers who received gifts from Vice President, Brian Turner CBE, before an operatic trio opened the second half.

The triumphal march from 'Aida', ‘Nessun Dorma’  played with bravura character by Tom Smith and 'Introduction to Act III'  of 'Lohengrin'  were reminders of programmes from the past 75 years or more of these popular events, whilst further memories were stirred with 'Cornet Carillon'  and 'Nimrod'.

The two movements of ‘Suite Gothique’  and ‘The Lost Chord'  ensured that the massed band tradition of glorious finales was not lost, whilst the playing of the Ukrainian National Anthem was a signal of solidarity that stretched far beyond the borders of a small area of musical Yorkshire.