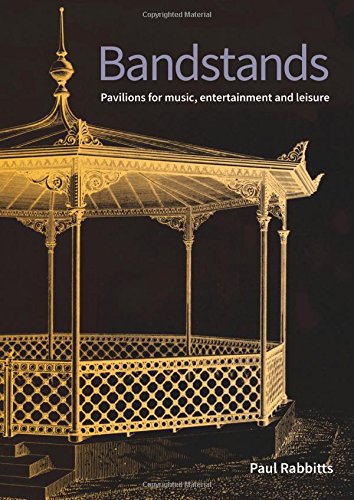 The public bandstand remains an evocative example of the practical ideals of social planning fuelled by the Victorian desire to improve the moral rectitude of the working classes.

They were the by-product of far-reaching legislation; which from 1833 onwards led to the creation of public parks and recreation grounds, promenades and pleasure gardens as a means of benefitting the health and well-being of a population increasingly hemmed in by the blight of highly industrialised urban landscapes.

As one report from Tower Hamlets in 1839 suggested; “...a Park in the East End of London would probably diminish the annual deaths by several thousands...and add several years to the lives of the entire population.”

From necessity came design, and at their heart emerged bandstands; mini masterpieces of wrought-iron, stone and glass that provided the focal point to the ‘musical cultivation’ of communal open-air entertainment (helped by the explosion in affordable Hire Purchase agreements aimed at brass bands themselves).

Paul Rabbits’ splendid book is dedicated to both their social and architectural glory (he is a respected landscape architect and Head of Parks for a local authority). Impeccably researched and presented, it is a lovingly dedicated tribute to a very peculiar combination of practical, artistic engineering.

For all their ornate, redundant beauty, 160 years or more later they continue to offer a haven for easily accessible musical as well as artistic expression - from traditional brass band concerts to rock groups (Dire Straits once performed at Clapham Common bandstand), political rallies to young lover’s midnight trysts.

For all their ornate, redundant beauty,160 years or more later they continue to offer a haven for easily accessible musical as well as artistic expression - from traditional brass band concerts to rock groups, political rallies to young lover’s midnight trysts.

Their story is told with clarity and purpose; from the early paternal rationales and ‘Pleasure Garden’ ideals, to the flowering of a golden age of popularity (at their peak there were over 1500 dotted around the country).

Wonderful images showcase the cornucopia of structures and designs (and so many of the examples in the book are truly remarkable), as well as capturing a snapshot of the listening habits of the public throughout the generations.

The post war decline and loss of so many fine examples is meticulously logged with touching obituary affection, before the author brings his tale up to date with their revival, as a new era of enlightened concern over the demise of such an important part of our public ‘heritage’ led to the start of widespread Lottery Funded investment in parks in 1996 - amounting to over £700 million to date.

It ends on a note of optimism – one that echoes the opening paragraphs of the book’s introduction.

Used, loved and respected, bandstands remain as relevant, practical and beautiful today as they have ever been - and thanks in no small part to Paul Rabbitts’ outstanding contribution to their cause.