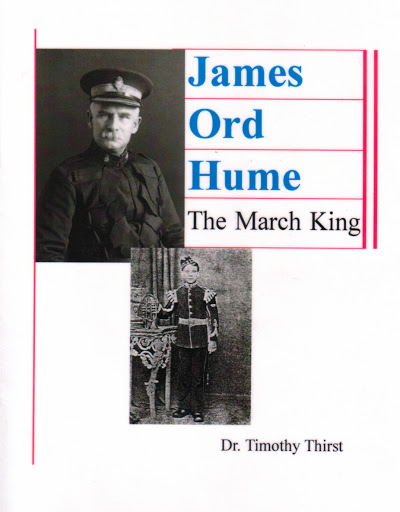 This compact biography by Dr Timothy Thirst was first published in 2006, and is a lovingly researched portrait of a major historical figure of the banding movement whose music is still enjoyed by so many, but whose life is known by so few.

James Ord Hume was born in 1864 in Scotland. Over the next 68 years he was to become an almost unrivalled composer of marches, a forthright adjudicator and above all else, a champion of the brass band movement all over the world.

The author was inspired to find out more about him when one of his grandsons joined his band in Norfolk.

A chance opportunity turned into extensive forensic research. The end result is a wonderful publication that shines a long overdue light on a remarkable brass band musician.

Self disciplined, taught and assured, Ord Hume’s outlook on life was forged within the British Army. Starting as a boy soldier by the time he left aged 29 he was a complete musician – able to play just about any instrument, and a prolific and inventive composer and arranger.

What marked him out though was his attitude to others – something that itself came from the influence of a far sighted Bandmaster called Alexander Miller.

Ord Hume was certainly ambitious (one Commanding Officer noting that he was “very keen on improving himself”) - a trait that fuelled his curiosity and talent, although he never abused his good fortune and always remembered acts of kindness and direction imparted to him.

When he died in November 1932, money was raised to erect a fine headstone made of Scottish granite to make his grave in Edmonton, North London.

The inscription stated: “A friend of all bandsmen. The years shall not outgo out thinking of thee”.  It was a fitting epitaph.

Through his extensive research Tim Thirst balances the statistical facts of his legacy with the warmth of his quixotic personality, especially as a forthright and acerbically witty adjudicator.

On another occasion he wrote; “The first cornet player does not notice F natural in the middle; he plays F sharp, which perhaps he considers is near enough…”

Once when judging in Australia he remarked that, “Why not kill that cornet player who is always coming in when we are playing peacefully…”

On another occasion he wrote; “The first cornet player does not notice F natural in the middle; he plays F sharp, which perhaps he considers is near enough…”

He was however, always quick to thank his hosts. The Aussies loved him for it.

Over the years he wrote countless marches – from those that have endured such as ‘The BB & CF’, ‘Roll Away Bet’, ‘The Elephant’ and ‘The President’ (written under the non-de-plume of William German) to those whose ink has faded into obscurity such as ‘Blighty’, ‘Love & Honour’  and ‘Orpheus’.

it would be wonderful to hear ‘Prairie Flower’ commissioned by an infamous snake-oil salesman and native Red Indian impersonator called Sequah (real name William Henry Hartley from Yorkshire) once again.

His best are considered by many to stand comparison with those of Sousa, Alford and his fellow Scot, Alexander Lithgow - although it would be wonderful to hear ‘Prairie Flower’  commissioned by an infamous snake-oil salesman and native Red Indian impersonator called Sequah (real name William Henry Hartley from Yorkshire) once again.

It was reputedly written by Ord Hume in 5 minutes – about the same time it took for the quack medicine to supposedly cure ‘suffering females’ of rheumatism, liver complaints, indigestion and all blood diseases.

Away from the chicanery he also wrote medleys, selections and overtures, foxtrots, air-varies, intermezzos, fantasias, songs and solos, not forgetting his arrangements of the first test-pieces used at the National Championships of Great Britain.

All this and more formed part of James Ord Hume’s remarkable life – one treated with respect and relevance by the author’s obvious musical love of his subject.

To purchase the book, go to:  http://www.stalhambrassband.com/james_ord_hume_1864.htm