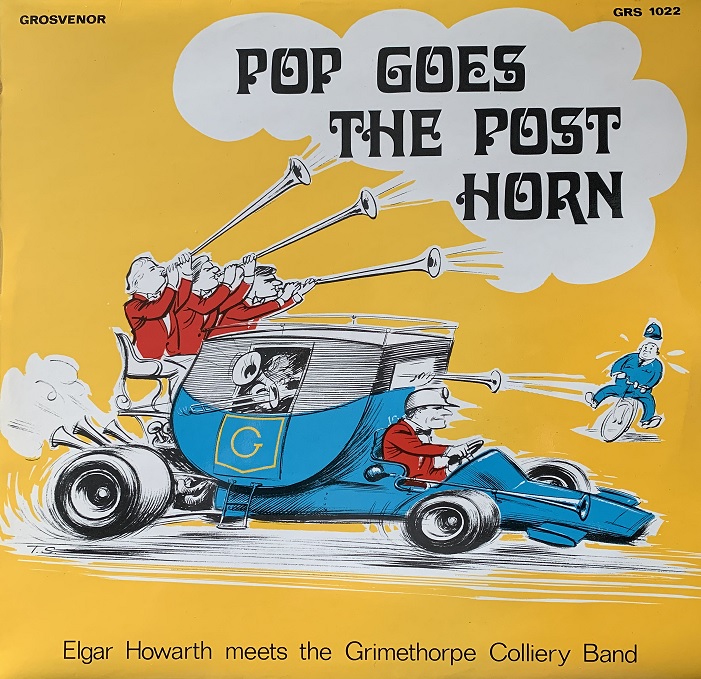 The early 1970s were one of the most fertile musical periods in the history of the brass band movement.  New composers were being attracted; many respectful of tradition, some rather more intrigued by the exciting possibilities of what they envisaged as a somewhat under-utilised medium.

Elgar Howarth expertly negotiated a course between both.

He also arrived at a time when brass band entertainment was also taking a leap into the possibilities of the unknown.  The televised Granada Band of the Year competition had been held for the first time in 1971, with Grimethorpe under Howarth winning the titles in 1972 (in the September) and 1973 (in May).

The contests were the brain child of promoter Bram Gay and television producer Arthur Taylor.

Described as “not a revolution, but a small contribution to evolution” the aim was to provide “a peak period” television presentation, “taking into account the need to entertain the audience while promoting the brass band as a medium not only of entertainment but of musical communication.”

Strange then that Bram Gay’s notes on this 1973 release (made up of the music used to win the events) dripped with such pointed sardonic opprobrium.

The sleeve front certainly gave the ‘audience’ he was looking to attract with the Granada contest itself some idea what they were getting; a Grimethorpe F1 car speeding past a rotund PC Plod (it would have made a great entrant in the ‘Whacky Races’ cartoon show) with a trio of post horn players heralding their arrival (one of whom looks like the suave MD). It was Day-Glo, vibrant and comedic.

Perhaps Bram Gay was being deliberately ironic, but in describing Howarth as “a serious musician” he then added, “this must be said here and now because there is little in this disc, his first with a brass band, to indicate seriousness of purpose”.

Just to spice the acidic mix more, he adds that in terms of entertainment all he needed to do was to provide “groundbait for those who wish merely to be amused”.

Not exactly a ringing endorsement, whilst in respect to Howarth’s pseudonym non-de-plume W Hogarth Lear, his pointed sarcasm adds that; “Here, I fear, is a composer of whom much more may be heard.”

With friends like that, the LP did well to shift any copies off the shelves.

Perhaps Bram Gay was being deliberately ironic, but in describing Howarth as “a serious musician” he then adds, “this must be said here and now because there is little in this disc, his first with a brass band, to indicate seriousness of purpose”.

Listening to it today it still has a rough edged resonance; very much of its time, but which in its way still remains relevant almost 50 years after it was first recorded.  How really different is Cory’s cartoon inspired ‘Jungle Book’ Brass in Concert programme in entertainment outlook?

You can therefore forgive yourself for having a wry smile at the silliness of ‘Trumpeter’s Holiday’ and oddly balanced takes on ‘Moonlight Serenade’ and ‘Embraceable You’. However you can also admire the inventive cleverness of the ‘Elizabethan’ delights of Howarth’s arrangements of music by John Bull, Giles Farnaby and JS Bach.

And whilst the local police force take longer to catch up with the miscreant in ‘Cops and Robbers’ than it did to finally get Ronnie Biggs behind bars for his blag, and there is robust nautical scruffiness to the ‘Russian Sailor’s Dance’, there is also a stamp of unmistakable quality with the rousing ‘Lohengrin’ and the tender foresight of ‘Londonderry Air’.

The soloists are very good too – Stan Priestly, David Moore, Malcolm Holmes and the post horn trio of Graham O’Connor, Ken MacDonald and Peter Roberts all playing with a certain flair.

All that and the ‘Finale’ from Joseph Horovitz’s ‘Sinfonietta’ and the ‘March’ from Bryan Kelly’s ‘Divertimento’ offer a glimpse of the unquestionable ‘serious musician’ Bram Gay describes.

You just wish he could have brought himself to say so all along.