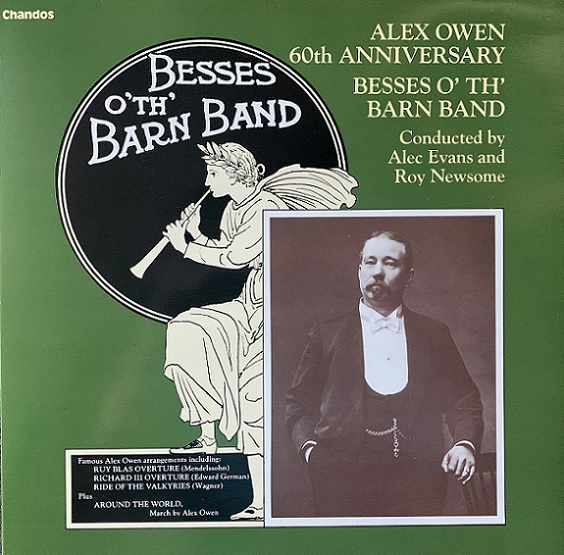 July 29th this year will mark the centenary of the death of Alexander Owen - perhaps the greatest of all the brass band leviathans.

At the peak of the movement’s historical Victorian popularity he occupied a zenith above all others.

He was colourfully described at the time (around 1893) by the amateur local historian Joseph Hampson as a man, “...whose name and fame extend throughout the universe”.

His association with Besses spanned 36 years – the golden period of which was without doubt the decade or so from 1892 when they won the British Open, to 1903 when they claimed the National Championship title.

From that time until his death they became a world-touring concert band - going 15 years until 1918 without taking to the contest stage.

Just a few weeks before the 1920 Belle Vue contest, he died.  Willie Wood famously led them to victory conducting with Owen’s baton.

Just a few weeks before the 1920 Belle Vue contest, he died.  Willie Wood famously led them to victory conducting with Owen’s baton.

Given his prodigious work ethic this recording could well have become the first in an extended series celebrating Owen’s musical genius (especially as an arranger) – yet thanks to Roy Newsome, who at the time was leading the last major contesting renaissance of the band (they won the British Open in 1982) we are at least left with this fine 1980 release.

Newsome was without doubt both a fan and approving academic. His understanding musical approach (along with Alec Evans) is transparently sympathetic; the stylistic nuance eliciting cultured playing from a warmly balanced ensemble that retains a light, clean edged elegance.

That is certainly the case with the featured soloists; Peter Read and Graham McEvoy (who won the Alexander Owen Scholarship award in 1977) delivering an impish ‘Duo Concertante’  full of waspish filigree, whilst Andrew Snelson is a tender lead in the deceptively simple arrangement of ‘Angels Guard Thee’.

Gounod’s ‘Judex’  chorus from ‘Mors et Vita’  transports you to the lost age of the oratorio (Owen may well have heard it soon after its 1885 premiere in Birmingham). Mendelssohn’s ‘Ruy Blas’  overture (arranged around 1908) also has a deeply burnished tonal quality – expertly paced with a sense of emerging dramatic impulse.

There is also a dark air of crooked-backed insidiousness to the overture to ‘Richard III’  that never overplays its villainous hand, whilst the ‘Valkyries’  are splendidly Wagnerian - a fantastic three minute snippet of Germanic bombast from Owen’s behemoth 35 minute operatic selection.

There is also a dark air of crooked-backed insidiousness to the overture to ‘Richard III’ that never overplays its villainous hand, whilst the ‘Valkyries’ are splendidly Wagnerian - a fantastic three minute snippet of Germanic bombast from Owen’s behemoth 35 minute operatic selection.

And although the elaborate march ‘Around the World’  lacks the lasting popular functionality of those written by his contemporary William Rimmer (‘Pelorus Jack’  is a remarkably ornate example written in homage to a famous New Zealand white dolphin - https://www.youtube.com/watch?v=_aIMQRSYnG4) it would certainly have made an immediate impression of technical brilliance on audiences on the famous World Tours of 1906 and 1910.

It still makes you raise an eyebrow in admiration today.

The release (which came in a hinged sleeve to allow space for Newsome’s notes and some wonderful photographs) is rounded off with a somewhat clunky extract from Owen’s extraordinary ‘Rossini’s Works’  (1884).

Owen simply made another before turning his arranging eye to Gounod and Beethoven.

And whilst it would have been a delight to hear the arrangement in its full glory, it remains a tantalising glimpse into the contest winning thought processes of an arranger perhaps only bettered in his art in a different era by Howard Snell.

100 years ago the greatness of Alexander Owen was undisputed. It still held true in 1980 and remains so today.